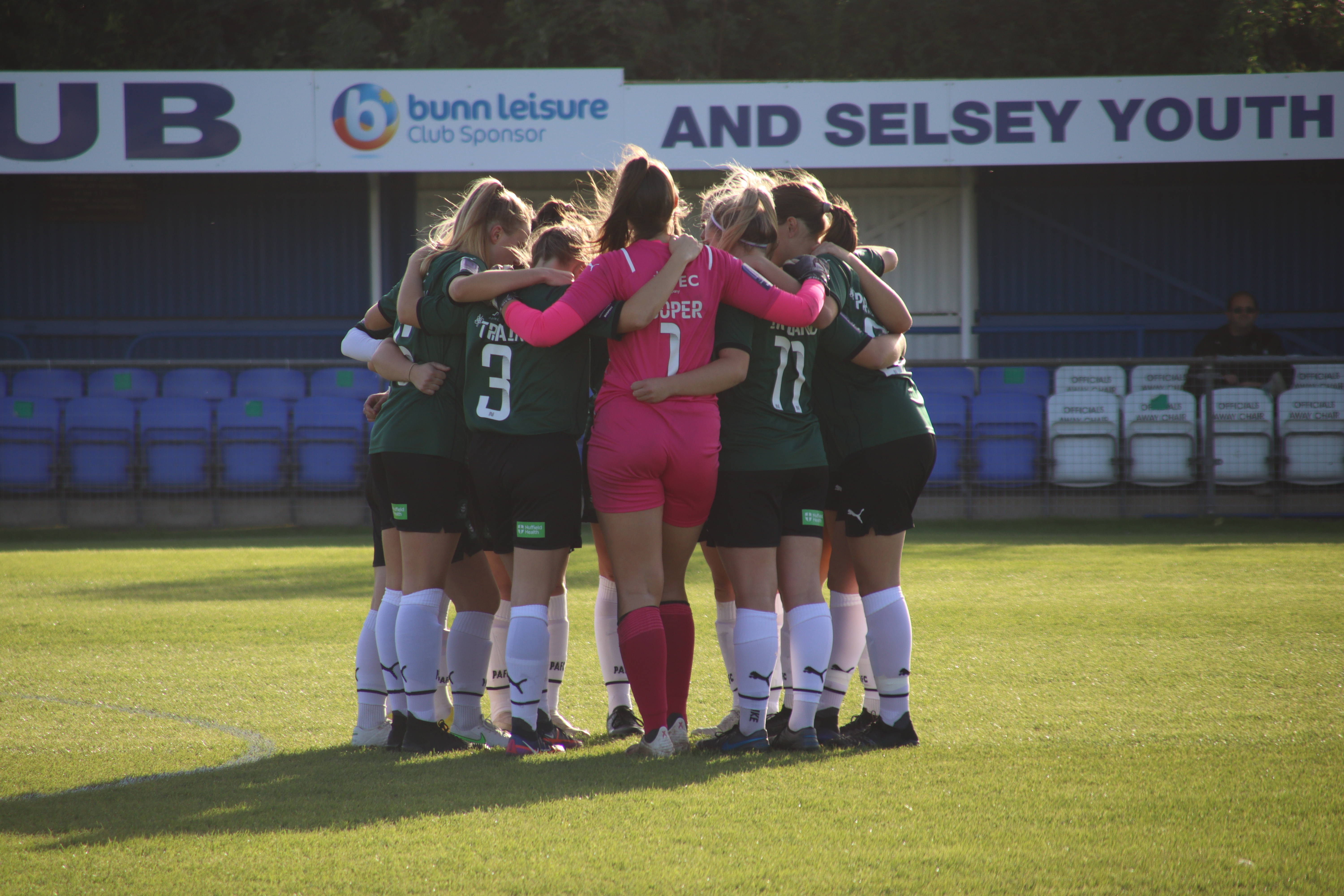 This weekend Plymouth Argyle Women fell to a frustrating defeat against Chichester and Selsey Ladies in the FAWNL Cup. Having beaten Exeter 2-0 in the previous round, Argyle were looking to build some form in the cup following last weekend's defeat to Ipswich.

The pilgrims were bolstered by the return of former England International defender Jemma Rose after injury had caused her to miss the last few fixtures. Having changed to a 3-5-2 from their usual 4-2-3-1, Jemma slotted in at right centre back while Rosie Train and Sophie Perrin provided the width with Zoe Cunningham taking up an unorthodox position upfront with Natasha Knapman.

Argyle looked to start on the front foot and use their wingbacks to their advantage by playing the ball in behind and stretching the Chichester defence. Argyle had plenty of the ball and created the first chance of the game in the 30th minute, the ball was played up to Cunningham, who smartly spun her marker, but her shot from the edge of the box was well held by Foster in the Chichester goal. Then only moments later, Cunningham had another chance. Perrin did brilliantly to burst beyond the Chichester defence and pick out Cunningham, but Foster again saved her volley.

Midfielder Beth Ireland then got in the action, and after finding space out wide, she cut in from the left wing, but her long-range strike dipped narrowly wide of the far post.

Argyle had the better of the play in the first half and would have been disappointed not to be in the lead, and indeed they were punished for not taking their chances only 5 minutes into the 2nd half. Chichester pumped a deep free-kick into the Argyle box, and it deflected off a combination of Rose and Alexandre as they challenged for the ball and fell just out of the reach of Poppy Soper in the Argyle goal to give Chichester the lead.

Argyle almost responded immediately, and after a tactical change saw substitute Oliva Ramsey slot into the back three, pushing Jemma Rose into midfield, Rose nearly made amends for her role in the Chichester goal. The ball was whipped into the box by Rosie Train, and Rose won the knockdown to Knapman, but a last-ditch tackle prevented Knapman from finding the back of the net.

Knapman would, however find the equaliser for Argyle in the 61st minute. Substitute Ramsey played Sophie Perrin in behind the Chichester backline. Perrin then picked out Knapman in the box, who fired the ball into the roof of the net and Argyle back into the game.

Argyle went close to taking the lead twice, first through a header from Rose that was deflected behind for a corner. Then from that corner, Huntley won the header but couldn't keep the ball down as her effort went over the bar.

Argyle could have had a penalty in the 70th minute after Knapman snuck between defender and goalkeeper to intercept the ball in the box, after a scramble in the defence there was a coming together between Knapman and the goal keeper which the referee ruled in favour of Chichester despite the Argyle claims for a penalty.

It would prove costly for Argyle as after a rare foray into the Argyle half Chichester won a corner, and Fox fired the corner directly into the back of the Argyle net to restore Chichester's lead.

Argyle pushed for an equaliser and nearly had it in the 83rd minute after Lane rounded Foster in the Chichester goal, but another last-ditch tackle prevented her from scoring. Shortly after, manager Ryan Perks was sent off by the referee for dissent. Despite losing their manager, Argyle still looked for the equaliser and thought they had it in the 89th minute as a whipped free kick from Sophie Perrin looked destined to find the back of the net, but a brilliant save from Foster denied Argyle.

Then in added time they had another chance to score, but Knapman's late effort was deflected away from goal by a combination of defender and goalkeeper. But with Argyle committing players forward and chasing the game, Chichester managed to add to their lead. A long ball in behind found Saunders one on one, and she was able to finish past the onrushing Soper.

It was a frustrating afternoon for Argyle, who despite putting in a good attacking performance, were unable to bounce back from last weekend's defeat. The Pilgrims will be hoping that next weekend's away game against Keynsham Town in the FA Cup will prove more fruitful.