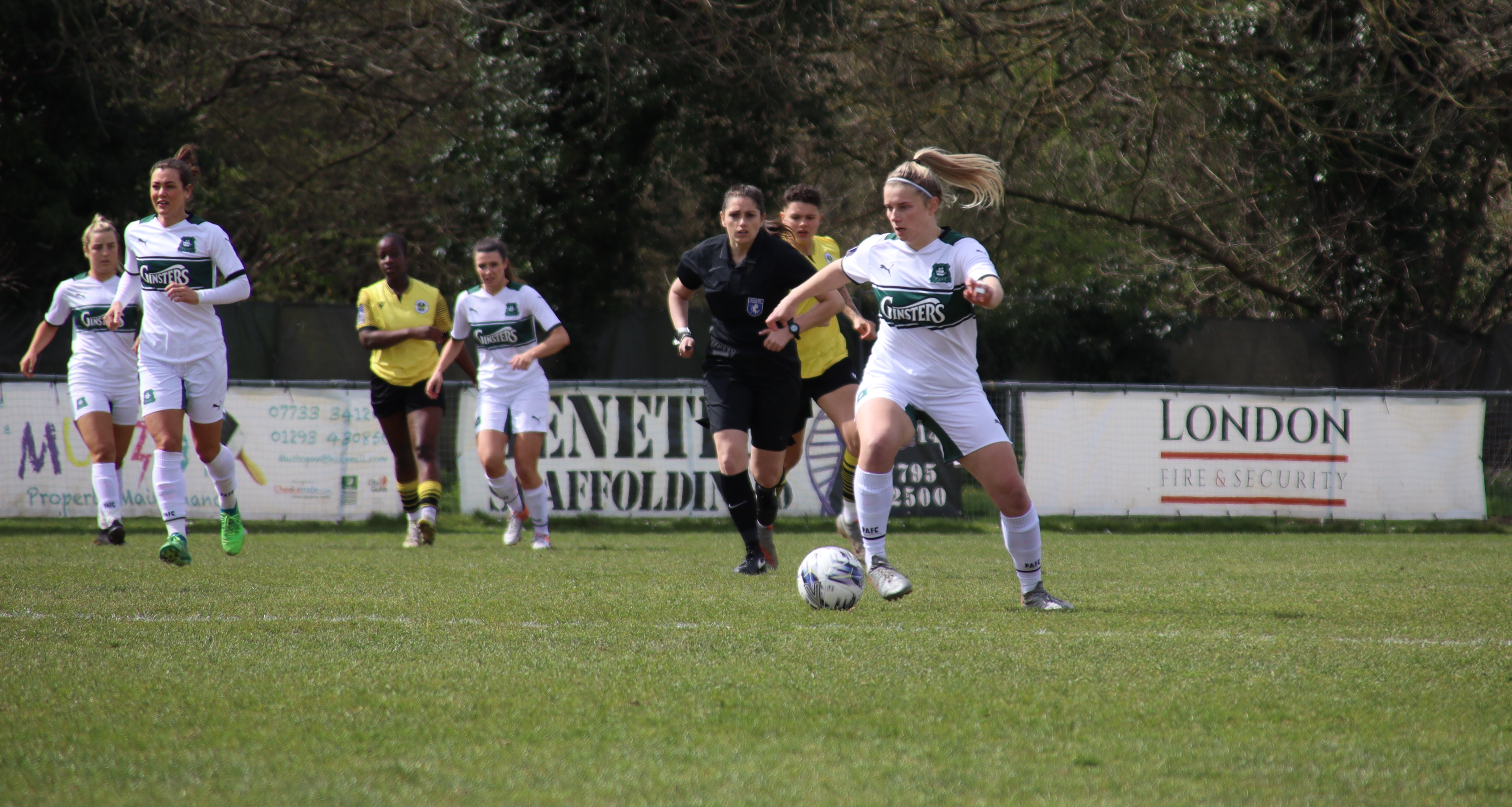 Plymouth Argyle Women fell to a frustrating 2-0 defeat away to Crawley Wasps this Sunday.

Having played out a seven-goal thriller against the same opponents last weekend, the reverse fixture was a much scrappier muted affair.

The Pilgrims were forced into a number of changes before a ball was kicked, with top goalscorer Natasha Knapman unavailable after picking up a hamstring injury in training while new signing Charlotte Whitmore was unavailable for selection.

It meant that winger Amber Pollock started upfront as a makeshift striker, while captain Zoe Cunningham was only fit enough for the bench after she also picked up an injury in training.

It was a scrappy start to the game, with both sides struggling to find any rhythm. However, it was the Wasps who took the lead in just the 14th minute after Gibson found space in behind the Argyle back four and fired the ball into the roof of the net.

Argyle looked to respond immediately, and Pollock did well to pick up a loose ball on the edge of the Crawley box, but her snapshot flashed wide of Goldsmid's far post.

Pollock then nearly turned provider when she slid Ireland in behind the Wasps' defence, but a last-ditch tackle prevented the midfielder from pulling the trigger.

The game continued to be scrappy, with both sides struggling to carve out any clear opportunities until the 35th minute. Swabey did superbly to bring down a high ball inside the Argyle box, but her left-footed shot was scuffed and went wide of Read's near post and out for an Argyle goal kick.

It took until the last action of the first half for Argyle to go close again when Ireland worked space on the edge of the box, but again, her right-footed effort curled only inches wide of the far post right on the stroke of half-time.

Argyle started the second half much more intensely and nearly scored a deserved equaliser as early as the 48th minute.

Lane played a super ball in behind the Wasps' defence, and Pollock exploited her pace to latch onto it, and she tried an audacious chip from outside the box. But with Goldsmid stranded, the ball fell only inches wide of the far post, much to Goldsmid's relief.

It was encouraging for Argyle, who responded by making an attacking change with Zoe Cunningham coming on to replace Campbell for her 100th appearance for The Pilgrims.

Argyle continued to build the pressure on Crawley and had another opportunity in the 58th minute when left-back Rosie Train showed good feet to skip beyond her marker before her left-footed drive went narrowly over the Wasps' bar.

Then only two minutes later, Argyle went closest to equalising. After a spell of possession on the left-hand side, Pollock laid the ball off to Jemma Rose, whose low drive cannoned off the upright before being cleared by the Crawley defence.

The momentum was with Argyle as they pushed closer for an equaliser. Left back Rosie Train was involved again as she drove down the left-hand side and cut the ball back to Pollock, but her right-footed drive flew over Goldsmid's crossbar.

Much like the previous fixture between the two sides, Argyle were made to rue their missed opportunities as in the 75th minute Crawley doubled their lead.

A cross from the right-hand side fell to Nicholls at the far post, who fired into the bottom corner from close range.

The Greens continued to push for a way back into the game, and three minutes later, nearly halved the Wasps' advantage.

Ruby Murphy, on as a substitute, hit the ball long and found Cunningham, but her first-time strike from the edge of the box was well held by Goldsmid in the Crawley goal.

It would prove to be the last clear-cut chance for Argyle, who, despite pressing hard for the last ten minutes, were unable to break down a stubborn Crawley defence.

The result meant that Argyle dropped down into the relegation zone on goal difference, however they do still have a game in hand on Cardiff who sit one place above them.