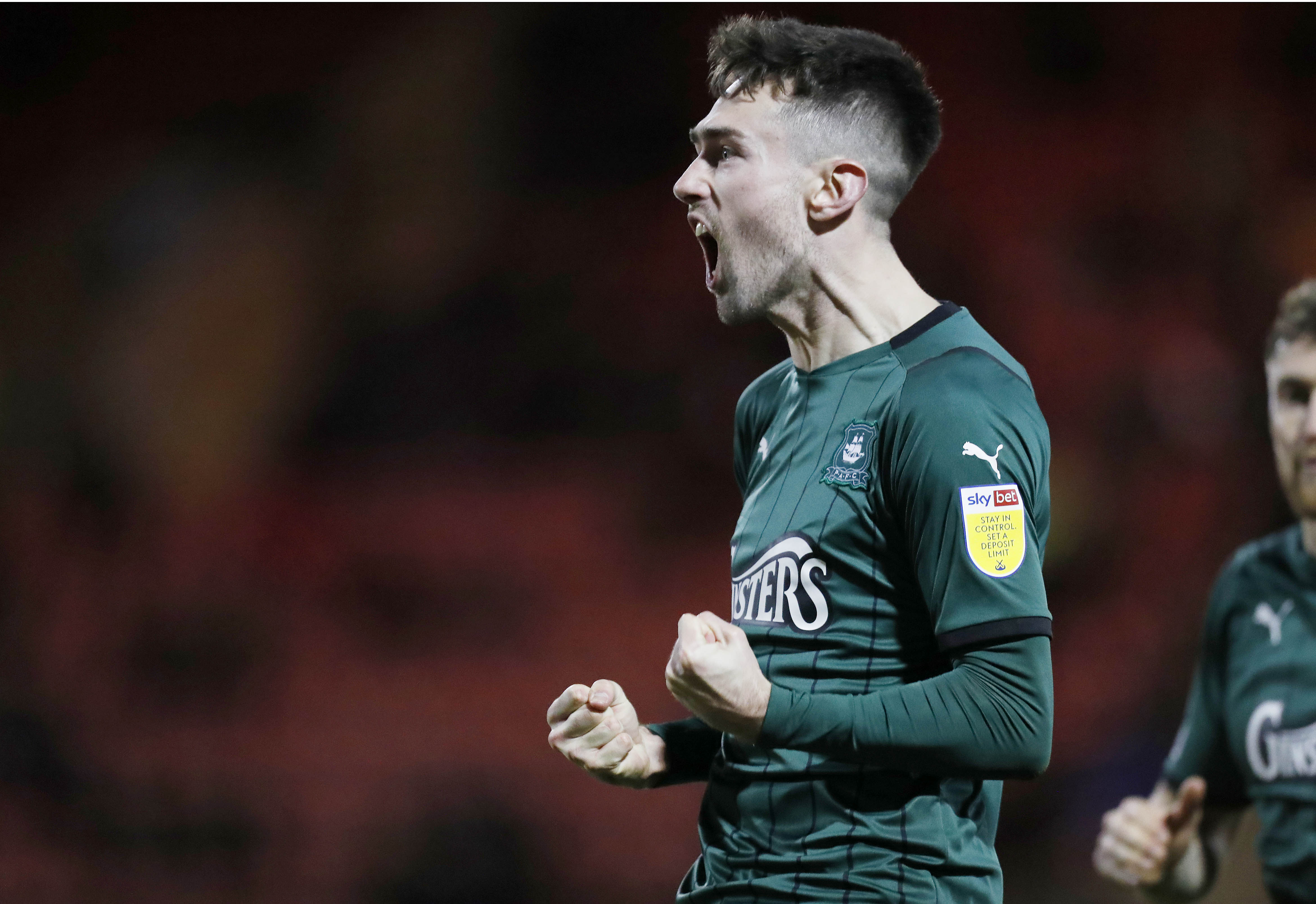 Argyle moved on from pushing the European Champions all the way to overpowering Crewe Alexandra with a sensational second-half display in Sky Bet League One.

Trailing to a Chris Long goal at half-time, the Pilgrims flicked a switch of attacking brilliance to rattle in four goals after the break.

The first three came within 11 minutes of the restart, Ryan Hardie scoring twice and Niall Ennis also on target. Hardie then completed one of the most welcome hat-tricks in recent Pilgrim history four minutes from time.

Argyle boss Steven Schumacher from the weekend epic at Chelsea, Ryan Law replacing Conor Grant for his first league start of the season, while midfield duo Adam Randell and Ryan Broom came in for Joe Edwards and Jordan Houghton.

Luke Jephcott and Jordon Garrick stepped down to the bench, with Ennis partnering Hardie in a Pilgrim attack looking to inflict a fourth straight defeat on a Crewe side battling for League One survival.

A bright start from the hosts saw the ball shifted wide to the left for a dipping Tariq Uwakwe cross palmed clear by a stretching Mike Cooper. The Greens settled into their own rhythm with some neat inter-play involving Law, Danny Mayor and Hardie.

It was the Mayor-Law combo that engineered room for a drive into the side-netting from Argyle’s young wing-back on 12 minutes. The Greens then fell behind when a fizzing low shot from Dan Agwei was saved by Cooper and Long swept in the rebound from close range.

A brilliant drop of the shoulder from Mayor presented Argyle with an immediate chance to reply, as he lured a loose tackle from the Luke Offord for a clear penalty, but Randell’s spot-kick was saved superbly by Will Jaaskelainen diving to his right.

Outstanding tenacity in midfield from Panutche Camara saw him force his way into a shooting position 25 yards from goal and a thunderous drive cannoned against the bar with Jaaskelainen rooted to the spot.

A scuttling left-footer from Hardie proved a lot more comfortable for Jaaskelainen before Luke Morphy flashed a long-ranger well wide. Hardie then broke into the right and cleverly cut the ball back for Ennis, but he was denied a certain equaliser by an incredible last-ditch block from Billy Sass-Davies.

The Pilgrims started the second period with tremendous determination and verve, drawing level within three minutes of the restart. Randell clipped a lovely cross to the far post for Law to steer a neat header back across goal and Hardie converted from close-range.

It was a fine goal straight from the Argyle wing-back play-book and Law next drilled over a low cross that Crewe just about clear with Ennis and Camara lurking for a shot. The magic of Mayor created space for the next cross, flicked narrowly wide by the head of Hardie.

After the drama of Stamford Bridge, Hardie was having fun, jinking to his left for a rising drive tipped over by Jaaskelainen.

The second goal deservedly arrived when Randell lashed a 25-yarder goalward and, despite saving the initial effort, Jaaskelainen briefly lost his bearings, allowing Ennis to pounce with a simple nod into the waiting net.

Argyle were in rampant mood and two soon became three, as more hesitancy from Jaaskelainen after a Brrom cross saw the ball fall to Mayor for a pass into the path of Hardie, who stroked a superb finish into the bottom corner.

Edwards for Mayor was the first Argyle change on the hour and an excellent defensive header by Macaulay Gillesphey ensured Crewe were kept reeling from the Pilgrim blitz.

Garrick replaced Ennis for the final 10 minutes of a game-management exercise for the Greens and he soon started a fabulous sweeping move that ended with a Broom effort steered a whisker over the bar.

A marvellous midweek had one more happy chapter, as the Pilgrims underlined their dominance with a delightful Hardie finish, dinking the ball beyond an advancing Jaaskelainen after a lovely pass from Garrick.

Three points, four goals and a great week to be Green.