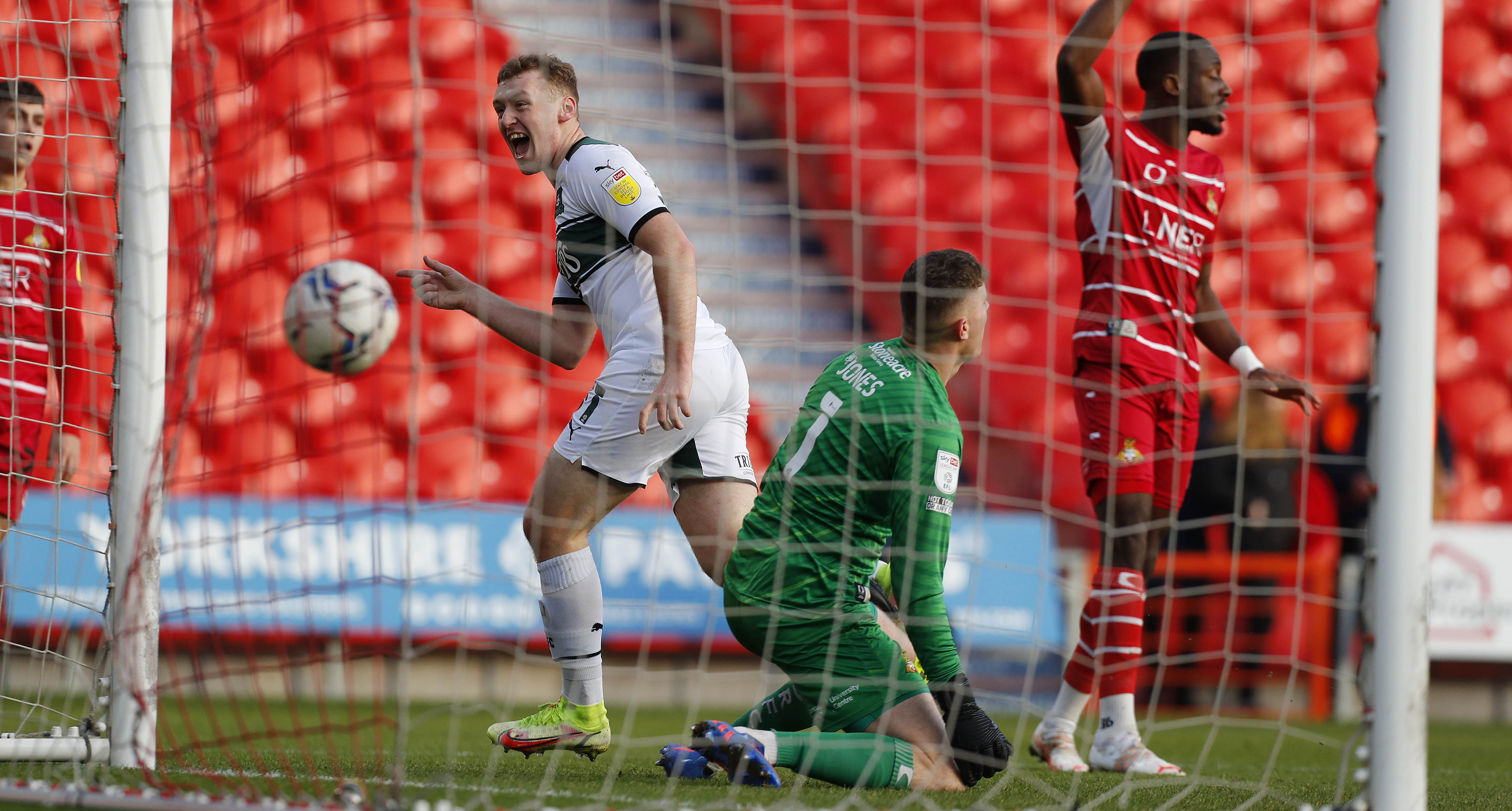 Clinical finishing, stubborn defending and a superb second-half display all added together for an excellent Pilgrim victory at Doncaster Rovers.

Argyle recovered from conceding an early goal to Branden Horton, with Luke Jephcott levelling in a landmark game for the Welsh striker, and fine goals from Joe Edwards and Jordon Garrick ensuring a tough week on the road ended in four points from a possible six.

Argyle boss Steven Schumacher made two changes from the midweek draw at Fleetwood, Jordan Houghton and Niall Ennis replacing Garrick and Panutche Camara, while Danny Mayor was fit enough for a return to the bench.

Rovers ended a run of five defeats with an excellent 1-0 success at Milton Keynes Dons last weekend and the home side created the first chance of a blustery afternoon, Matt Smith racing through the middle for a rising shot pushed wide by Mike Cooper.

The next save from Cooper was even better, brilliantly palming over after a slip in the Pilgrim defence had presented Mipo Odubeko with room to rifle a half-volley goalward from just ten yards.

There was a sense of inevitability about the opening goal for Doncaster, who had adapted far better to the challenging conditions, and a scuffed clearance was a gift for Horton to prod the ball past Cooper from close range.

Argyle finally settled into some positive attacking flow with Adam Randell and Conor Grant linking nicely to win a corner, which was drifted to the back post for Edwards to attempt an audacious flick sent marginally wide.

Within moments, Donny were racing forward and a cutback from the right eventually found Josh Martin, who was denied by a combination of Cooper, James Wilson and Dan Scarr all throwing their bodies in front of the shot.

Despite the Doncaster threat, Argyle were enjoying the majority of possession and the reward came via a terrific equaliser, Ennis spinning beautifully on the byline to thread a perfect near-post pass for Jephcott to steer beyond the exposed Louis Jones.

It was lovely play by Ennis and a typical predatory finish from Jephcott on his 100th Pilgrim appearance. Argyle then very nearly pinched the lead in bizarre circumstances, as a Houghton corner caught the breeze to deceive Jones and Rovers needed a goal-line clearance from Smith to rescue his goalkeeper.

Rovers thought they had restored their lead on the half-hour but Tommy Rowe’s effort was ruled offside and the Greens settled down with some lovely passing football, culminating in a Ryan Broom half-volley scythed narrowly wide of the far post.

From the next attack, Ennis almost converted a deep Grant cross and a Doncaster counter-attack was lashed over from a decent position by Odubeko.

The first half ended with Wilson just about prevented from forcing the ball over the line after an inswinging Grant corner but, back came Rovers, forcing another superb instinctive save from Cooper and Jospeh Olowu somehow poking over with the goal gaping.

Mayor replaced Randell, who took a knock in the first period, but it was Donny probing in the first ten minutes of the second period, with Camara then introduced for Broom.

After a scrappy spell, lovely work from Houghton freed Edwards for a cross from the right, but Grant was just crowded out before he could unleash. It was a warning shot that Rovers failed to heed.

Just like Fleetwood on Tuesday, Grant dug out a super cross from the left and Edwards timed his run and leap perfectly to steer a terrific header back beyond Jones and into the corner.

A sweeping break from Rovers reminded Argyle off their threat, as Rowe controlled and shot in one swift movement, with Cooper grateful to see the ball ricochet wide off his far post.

The Argyle reply was a scintillating passing move, with the ball worked delightfully wide for a low Mayor cross and Jephcott’s shot cannoned off the post. Jephcott was then replaced by Garrick for the closing minutes, while Donny introduced former Pilgrim Kieran Agard.

The Greens were now completely dominant and Camara came within inches of sealing the win, guiding a left-foot effort inches past the post. No matter, as Garrick duly stepped up to rifle a fabulous finish into the roof of the net from 14 yards and three deserved points.