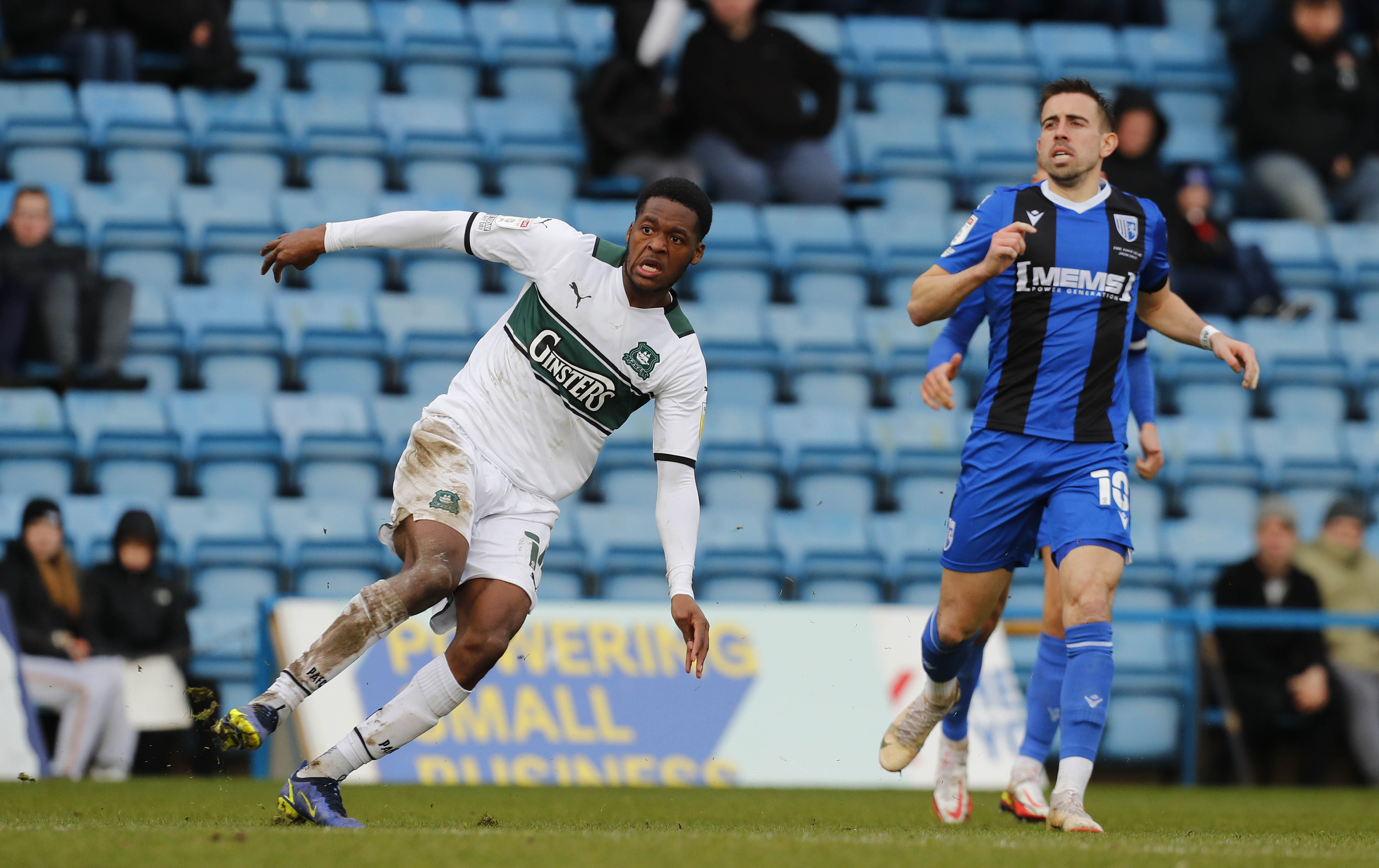 It was also a fourth consecutive victory for the Pilgrims, who emerged from a combative first period to play with a satisfying swagger in controlling the game after the break.

Argyle boss Steven Schumacher made two changes from the 1-0 win over Shrewsbury, Niall Ennis and Garrick given the attacking nod ahead of Ryan Hardie and Jephcott. Gillingham, meanwhile, stuck with the same side that drew 1-1 at Morecambe last weekend.

The remnants of Storm Eunice made for a wet and windy start but that didn’t stop Danny Mayor breezing through the home side in an early signal of his progressive intent.

Pilgrim confidence in possession was perfectly demonstrated by skipper Joe Edwards pinging a delicious half-volley pass wide for Conor Grant, who then drove forward and returned a cross for his captain to head narrowly over.

The Gills replied with a long-ranger flashed wide by former Pilgrim Olly Lee before the game descended into a scrappy period, broken up by a fizzing cross from Macaulay Gillesphey diverted off target by Ennis.

Panutche Camara was next to have a pop, lashing a 20-yard left-footer inches past the top corner. It was an opening half-hour of dominant Pilgrim possession, with the likes of Jordan Houghton, Mayor and Camara probing for a gap in Gillingham’s packed defence.

While the Greens continued to search for the right formula, the first half ultimately ended with neither side able to conjure a clear goalscoring opportunity.

If the half-time message was to find an attacking spark, Garrick was clearly listening intently, as he drove inside from the right wing and planted a delightful finish beyond the diving Aaron Chapman and just inside the far bottom corner.

It was a lovely goal from Garrick and once again highlighted the multitude of talents in Argyle’s striking quartet. In the immediate term, it was a goal that would force the Gills to push more men forward in search of a leveller.

An excellent cover challenge from James Bolton ensured that search did not reap swift reward and Argyle then countered with a pass from Ennis to Camara. Chapman raced off his line for a clearance that struck his own man but Camara was just unable to loft the loose ball into the vacant net.

While the Gills looked to increase their temp, inevitable spaced opened for the Pilgrims to exploit and Mayor surged forward for a pass wide to Grant, who drilled a left-foot special inches wide of the far post.

After playing the assist card, Mayor opted to go alone with a delightful jink on to his right foot for a bending shot palmed wide by Chapman. At the other end, James Wilson snuffed out a deep cross to maintain the impressive protection of Mike Cooper’s goal. Ennis then dragged a difficult chance wide after a sloppy Gillingham pass.

The front-pair switch arrived on 73 minutes, Hardie and Jephcott replacing Garrick and Ennis, and they took just over a minute to win a penalty. Mayor fed Jephcott, who switched the ball to Hardie and he was tripped by former Green Stuart O’Keefe.

Jephcott grabbed the ball with authority and slotted a confident penalty into the bottom corner for a 2-0 lead that was richly deserved.

Argyle were enjoying themselves, as a fabulous threated pass from Edwards found the run of Jephcott for an effort steered a fraction past the post. Hardie then rifled a shot into the side-netting, with Mayor proving an irresistible menace to the home defence.

A fine Chapman save next repelled a Hardie dink from the rampant Greens. The outstanding Mayor was withdrawn for Ryan Broom in the closing minutes and Argyle move swiftly on to a midweek trip to Cambridge.