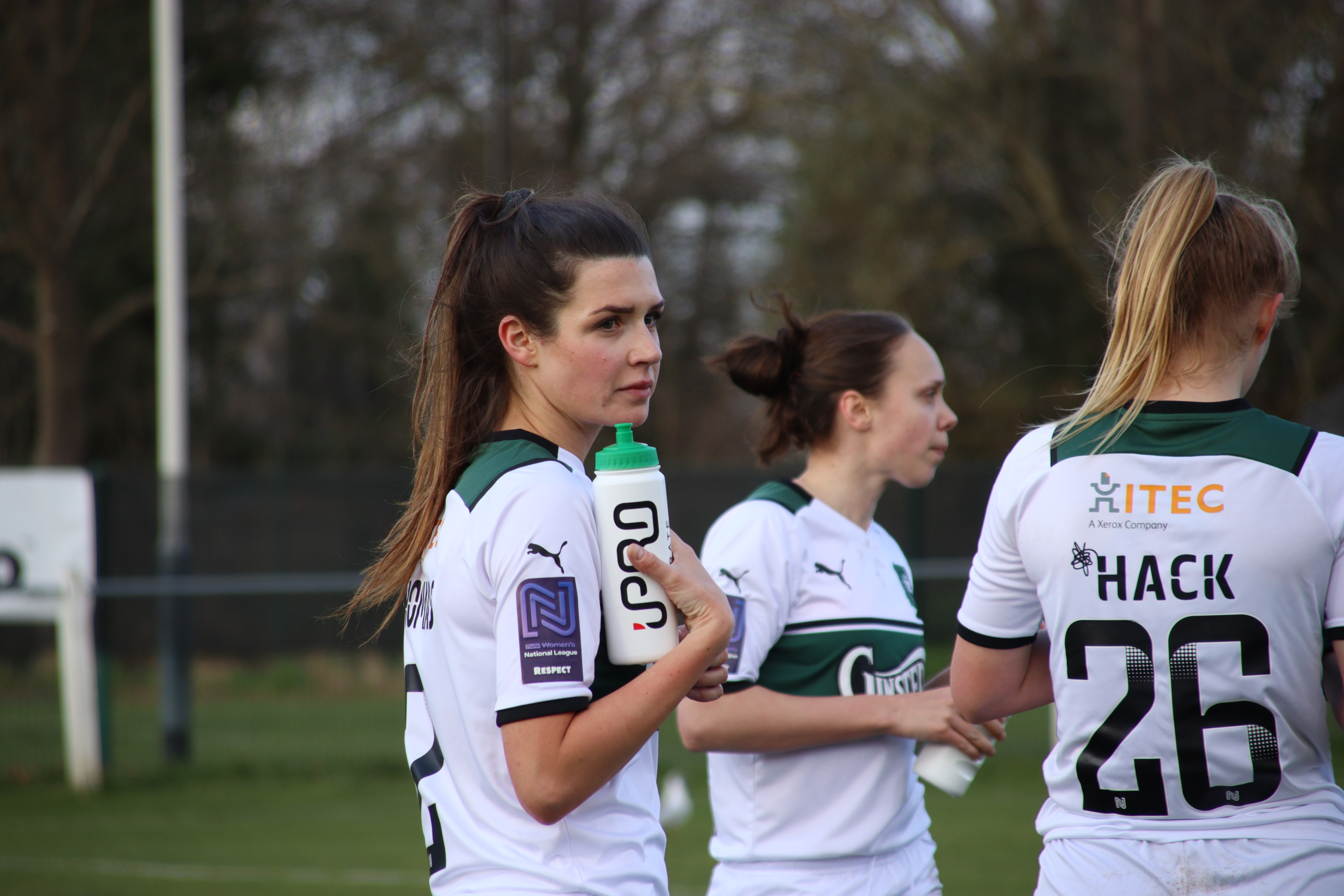 Plymouth Argyle Women made it back to back wins and finally moved out of the relegation zone with a 2-0 win against basement side Hounslow.

Having beaten fellow strugglers Keynsham Town 5-0 last weekend, The Pilgrims were full of confidence coming into their trip to Hounslow, but knew that nothing but three points would do in their quest to avoid relegation.

Argyle named a slightly changed side from last weekend, reverting from a 3-5-2 to a 4-3-3 with Amber Pollock coming into the starting line-up after impressing as a substitute last weekend.

Argyle’s intent was clear from the first minute of the game, Cunningham tried a shot from range, which Garrido in the Hounslow goal could only palm to Pollock, but her rebound shot drifted wide of the far post

Pollock then nearly turned provider. She beat her marker out wide on the right hand side and crossed the ball into Knapman, but Argyle’s player of the month for February fired the chance narrowly over the Hounslow bar.

Argyle were seeing nearly all of the ball against their opponents who had yet to score a league goal this season, and had another chance for the opener on 13 minutes. Perrin played a short corner to Cunningham who crossed into Giota at the near post, Giota won the header but got too much on the ball and her header went narrowly over the Hounslow bar.

When Argyle did get their shots on target Garrido was there to thwart their efforts. Cunningham, Ward and Knapman tested Garrido before Ward drew the save of the game from the Hounslow keeper. Rose played a ball into Ward in space in the box, her shot had the power, but Garrido reacted brilliantly to reach out a hand and palm Ward’s shot wide.

Ward then turned provider for Knapman. After going on a brilliant run and beating several Hounslow players, Ward slid Knapman through and she smashed the ball into the roof of the net. The Argyle celebrations were cut short however, by the linesman’s flag who disallowed the goal having adjudged Knapman to be offside.

Argyle did take the lead three minutes later. Ward got in behind Hounslow again and drew another save from Garrido, but this time the Hounslow keeper could only palm the ball to Jemma Rose who slotted the rebound into the back of the net to give The Pilgrims the lead.

Argyle continued in search of more goals for the remainder of the first half, with Pollock and Knapman both going close to doubling Argyle’s advantage but either Garrido or a Hounslow defender got back to prevent an Argyle second before half-time.

The second half continued like the first with Argyle continuing to look to double their lead.

Argyle should have doubled their lead in the 51st minute after Lane’s excellent pass found Knapman one on one again Garrido, however Argyle’s top goal scorer was unfortunate to fire the ball inches wide of the far post in search of her 10th goal of the season.

Knapman then went even closer in the 55th minute. Perrin’s in-swinging corner found her in the box but her goal bound header was cleared off the line by a Hounslow defender.

Argyle and Knapman were getting closer and eventually extended their lead in the 59th minute. Captain Zoe Cunningham played Knapman through on goal and Knapman coolly knocked the ball around Garrido and finished into the empty Hounslow net.

Argyle continued in search of more goals and looked to their bench to freshen the team up.

Substitutes Ellen Thomas and Gabi Alphous nearly combined for a goal when Thomas’ throw-in found Alphous in space but her shot was narrowly wide of the far post.

Fellow substitute Tiana Campbell also went close. She won the ball back at the edge of the Hounslow box and drew a good save from Garrido who did well to hold her strike.

With 10 minutes to go Argyle introduced goal keeper Jasmine Read in place of Poppy Soper for her Argyle debut.

Argyle saw the game out comfortably to make it back to back wins and finally move themselves outside of the relegation zone. With games in hand and more games to come against the teams around them, there’s still plenty of work to do but it’s a big three points in the right direction for The Pilgrims.