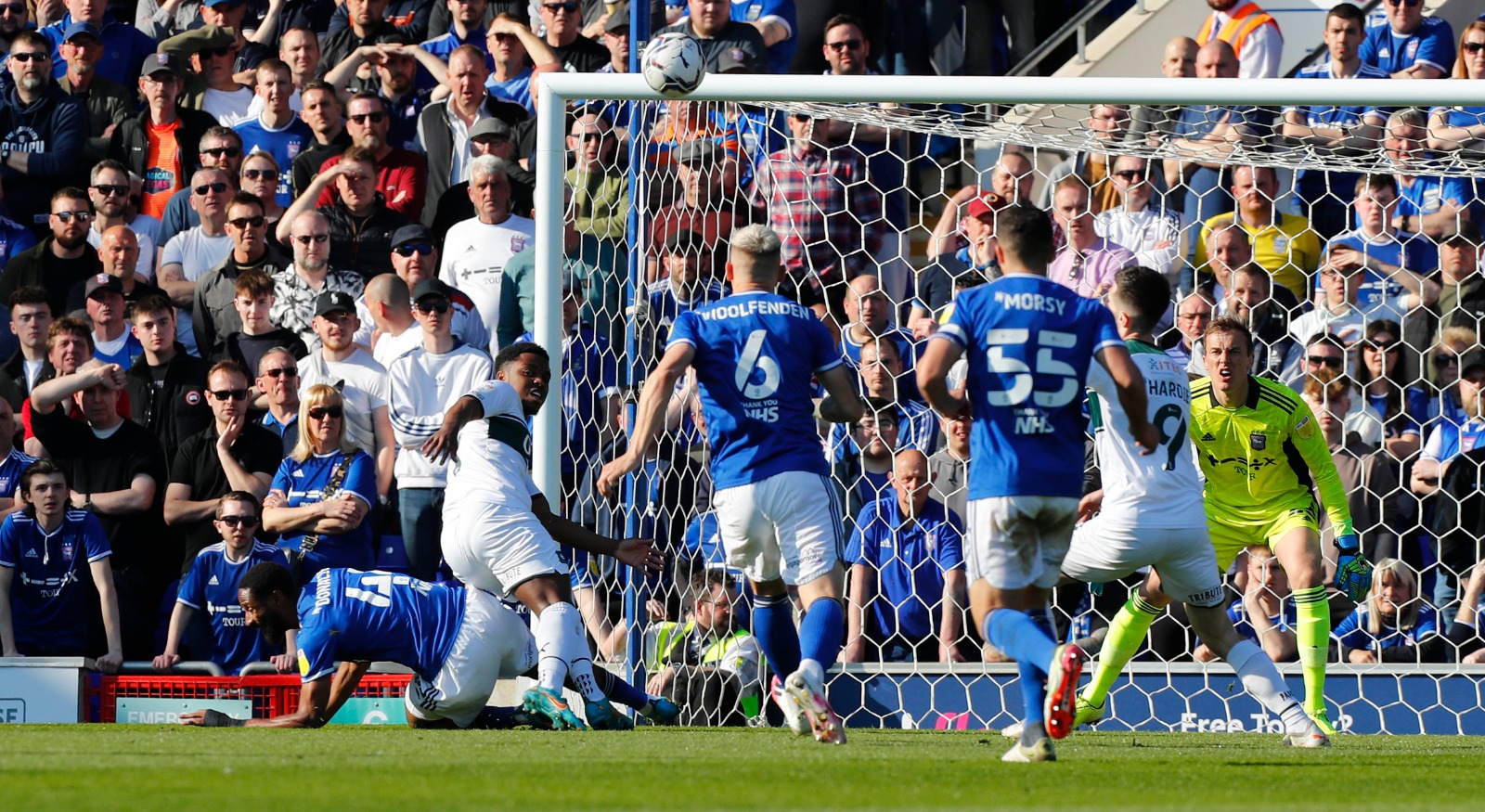 On Paul Mariner Day at Portman Road, a solitary goal from the home captain proved the difference, as both clubs paid tribute to their legendary former striker.

Given the goalscoring brilliance of Mariner in his pomp, it was one of those days when clear chances were conspicuously absent, apart from the simple tap-in converted by Sam Morsy just before half-time.

The home side entered the game on a run of 10 games unbeaten and they were first to muster a shot, Sone Aluko manufacturing room in the left channel for an effort that safely hit the side-netting of Mike Cooper’s goal.

Argyle settled in the Suffolk sunshine with midfield trio Jordan Houghton, Danny Mayor and Randell calmly controlling possession, switching the ball from side to side in search of a gap in a Town defence that had not conceded in five straight home games.

A nervy moment for goalkeeper Christian Walton, formerly of the Pilgrim parish, almost presented Ryan Hardie with a golden chance, but Ipswich recovered with a slick move down the right and a Wes Burns cross thankfully eluded the forward runners.

A fine defensive block from Macaulay Gillesphey stunted the next home attack before Argyle again quelled a fervent home atmosphere with some controlled passing. The Greens were then disrupted by an enforced substitution, James Bolton limping off to be replaced by Romoney Crichlow.

A terrific exchange of passes between Hardie and Niall Ennis conjured some room for Mayor to set the ball back to Sessegnon, who fired narrowly wide. Ipswich replied with a header from Burns that lacked the power to trouble Cooper.

The game turned decisively in Ipswich’s favour on 37 minutes, James Norwood picking up a lofted ball into the right channel and he fired a low cross that provided Morsy with an easy finish from close range. Norwood then fired over from the edge of the box, as Town sought to build on their advantage.

After such a brilliant recent run of form, it was a first period of attacking frustration for the Greens but there was a definite sense of Argyle playing higher up the pitch after the restart, with Mayor floating around in his quest for space to influence.

A couple of corners briefly stretched the Ipswich defence but it was responsible covering from Sessegnon at the other end that ensured Bersant Celina was unable to reach a threaded pass by Norwood.

Ipswich freshened up their forward ranks with the introduction of Macaulay Bonne and Conor Chaplin for Norwood and Aluko, while Schumacher turned to Ryan Broom in place of Houghton.

Referee David Rock interrupted with a strange decision on 70 minutes, seemingly ignoring the advantage rule when calling for a foul on Ennis, who was immediately on his feet and slipping a delightful pass to Broom in the penalty area.

Argyle’s afternoon took an unwanted turn with Hardie pulling up with a muscle injury. Jordon Garrick was the swift replacement but the game entered the final ten minutes with the Pilgrims still struggling to find their normal attacking zest.

When Broom did find an inviting low cross, there was a lack of Greens in the danger area waiting to pounce. Captain Joe Edwards took up the mantle to inject something extra to the Pilgrims and his pass to Broom forced a corner.

Argyle recycled the ball for a James Wilson header across goal that very nearly found Gillesphey at the far post before Ipswich countered and Burns had a glorious chance to seal the win but dragged his shot wide from a great position.

It was, however, a day that belonged to Ipswich Town.