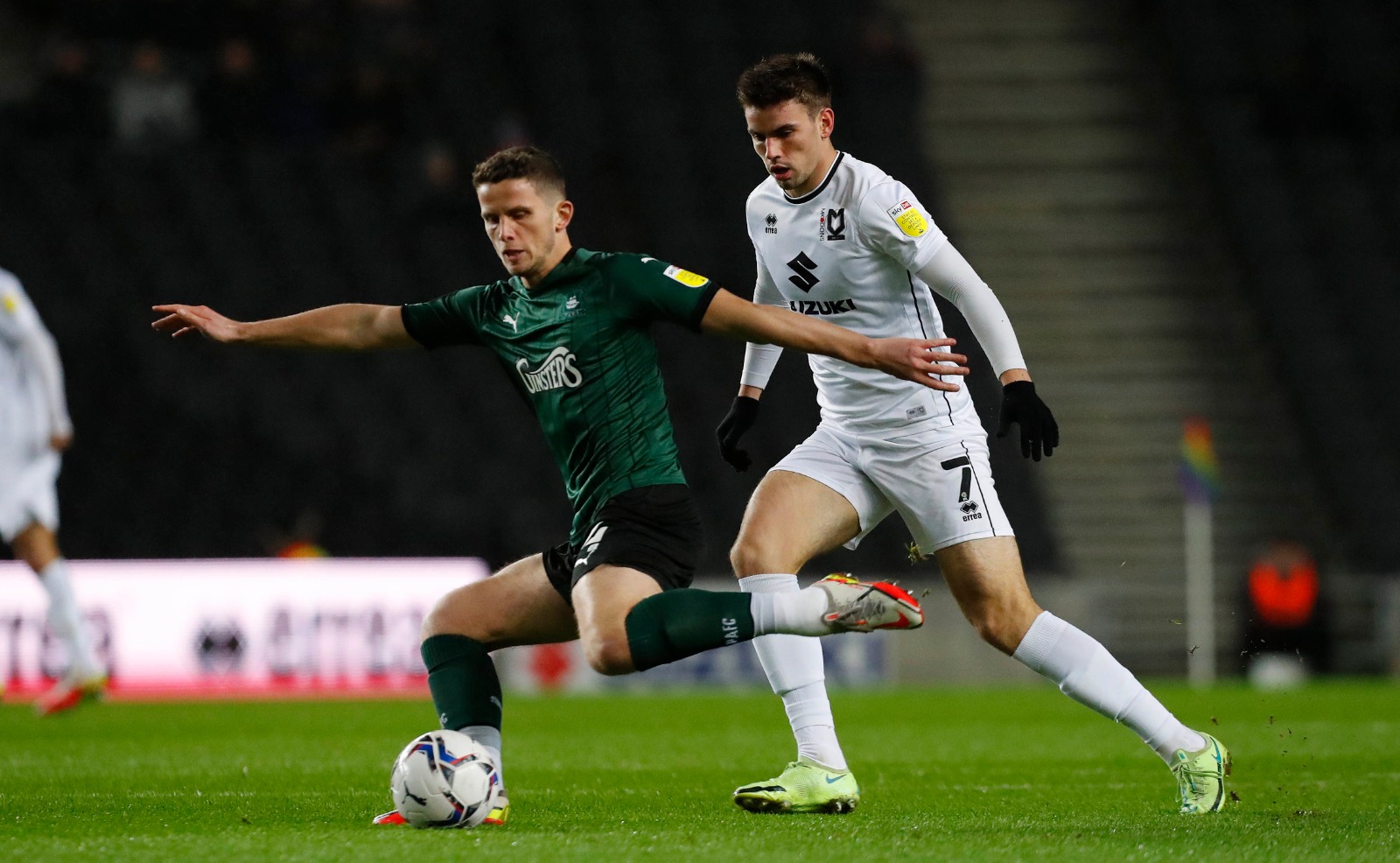 In a week of upheaval for our club, the new era under manager Steven Schumacher began with an outstanding second-half display to earn a point at MK Dons.

The hosts edged ahead in a tight first period with a deflected effort from Tennai Watson but Argyle were relentless after the break, and got their reward when Conor Grant lashed in a thundering finish midway through the second half.

The Dons had not played since beating Orient on penalties in the Trophy last Tuesday and found their early forays thwarted by good positioning from Dan Scarr and James Wilson before Camara rifled a long-ranger over the bar.

In a tight opening to the game, Argyle’s neat passing football was the redeeming feature, with Jordan Houghton master of ceremonies from midfield but the final third generally remained uncharted territory for both sides.

It was a loose pass on 20 minutes that presented MK Dons with the first chance, Mo Eisa fizzing a low drive toward the far post but Mike Cooper was in the right place for a fine stop.

Unfortunately, there was no stopping Watson moments later, pouncing on a ball over the top and his shot ricocheted off the recovering boot of Macaulay Gillesphey before nestling into the far corner.

Grant almost replied immediately with a super right-foot effort from 20 yards, palmed wide by Andrew Fisher. The Dons came back with a curling shot off target from Matt O’Riley.

As the half headed to a close, the Greens pushed their hosts back with a swinging cross from Broom almost finding the deep run of Joe Edwards. Grant also came close to picking out the skipper with a similar delivery after patient approach play.

Aden Baldwin replaced Harry Darling in the Dons’ defence at half-time but it was Argyle controlling the play after the restart, without finding that decisive final pass to breach the home rearguard.

A fluent move involving Broom and Houghton released Grant for a cross cleared by the recovering Josh McEachran, with the resultant corner snaffled at the second attempt by Fisher.

Mayor replaced Broom on the hour for Argyle and the fresh legs were soon combining well with Grant but, again, the final ball failed to conjure the one big chance Pilgrim possession deserved.

Finally, the breakthrough arrived on 66 minutes, Mayor brilliantly jinking down the left for a deep cross to Camara, who calmly found Grant for a terrific driven finish into the roof of the net from 16 yards.

The Dons responded with a dart into the left channel from substitute Troy Parrott and his well-struck half-volley cannoned off the bar. The Pilgrims were soon back on the counter with more fabulous work from Mayor ending with a shot deflected wide.

Garrick replaced Jephcott for the final 20 minutes and his impact was instant, winning a free-kick on the right for Grant to deliver but headed over by Scarr. The pace of Garrick was a constant menace, as the Pilgrims camped in the Dons’ half.

The hosts did conjure a moment of danger with a cross from the left dipping inches beyond the run of Eisa, who followed that with a tame shot into the grateful arms of Cooper.

A colossal tackle from Scarr prevented a certain break on the halfway line before Schumacher rolled the dice one last time with the introduction of Niall Ennis for Hardie, a first league outing of the season for the former Wolves striker.

In the final minute, Argyle so very nearly snatched the win their second-half display arguably warranted, Garrick lashing a super drive against the outside of the post from the right edge of the box.

Great character from everyone involved and wonderful Green Army support. We move on to Sunderland on Saturday.