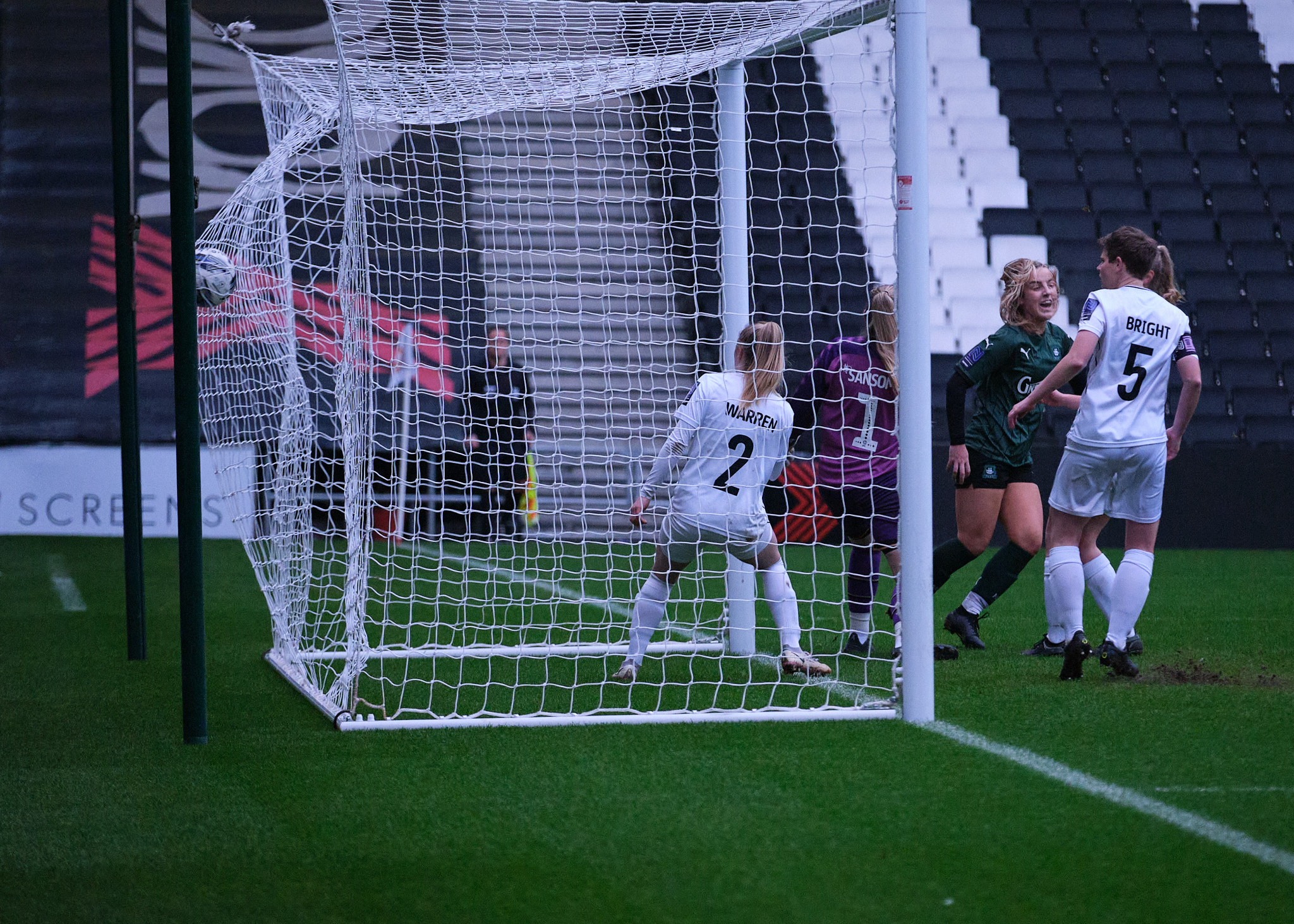 Plymouth Argyle Women fell to a 3-1 defeat away to MK Dons in their final game before a two-week winter break.

Argyle went into the game without top goal scorer Natasha Knapman and missed experienced defender Jemma Rose for their away trip to Milton Keynes. There were some positives to Argyle’s squad, with 16-year-old Lucy Hack retaining her place in the starting line-up to make her league debut. Fellow 16-year-old Tiana Campbell also came off the bench to make her league debut late in the game. At the same time, Amber Pollock continued her return to fitness with another positive substitute appearance for Argyle.

Argyle’s opposition had yet to win a league game all season, and after their recent upturn in performances, Argyle came into the game full of confidence. But it was MK Dons who made the faster start. Within the first minute, the Dons drew an excellent save from Welsh international goalkeeper Poppy Soper, who palmed over a long-range strike that looked destined for the top corner.

MK Dons continued to press Argyle up the pitch and drew another save from Soper in the 8th minute, who did well to get down and hold a shot at her near post. After MK Dons’ bright start, Argyle looked to respond, but after a trademark run in which she took on several MK Dons players, Zoe Cunningham’s eventual shot was blocked and cleared away by MK Dons.

Then in the 14th minute, Poppy Soper was drawn into making another save. A mistake at the back saw Taho played one on one for MK Dons, but Soper made herself big and was quick off her line to make the save.

Unfortunately, in the 16th minute, MK Dons did take the lead. Argyle cleared a set-piece, but the loose ball fell to Gould, who controlled and volleyed the ball into the far corner – nothing Soper could do to stop that one.

After the goal, Argyle began to see more of the ball and got a foothold in the game. Cunningham was involved again, but she saw another shot blocked by a resilient MK Dons defence after another positive run. Argyle nearly drew level in the 20th minute after winning the second ball from a free-kick. Ireland nearly picked out Gabi Alphous, who was only inches away from connecting with the cross.

After a fast opening 20 minutes, the game settled down in the latter stages of the first half, both sides looked for openings but failed to test either goalkeeper, and MK Dons went into the half-time break winning 1-0.

Argyle knew they needed to respond in the 2nd half and started much brighter after emerging from half-time and had a goal disallowed only a minute into the half. Perrin played a cross into the box that Imy Crawford challenged with the Dons’ keeper for. The keeper went down, and Crawford played the loose ball to Cunningham, who applied the finish. But the referee blew his whistle, having deemed Crawford to have fouled the keeper as she challenged for the ball.

Argyle continued to press for an equaliser, with Cunningham and Crawford both shooting wide from distance. Then in the 59th-minute Greek defender, Panagiota Papaioannou had a header cleared off the line after a great run and flicked header across the near post.

Then in the 67th minute, Argyle did equalise. Rosie Train played the ball into the near post from a corner, MK Dons failed to clear their lines, and Imy Crawford smashed the loose ball into the roof of the net to equalise for Argyle.

Argyle’s celebrations were short-lived; however, as almost immediately after equalising, MK Dons restored their lead. Argyle gave the ball away at the back to Taho, who finished into the bottom corner to restore MK Dons lead.

Argyle pushed for an equaliser, but the closest they came was from a long-distance effort from substitute Amber Pollock, but her effort was wide of the far post.

Then in the 79th minute, Poppy Soper produced her best save of the game, getting down low to superbly palm away a far-post shot that looked certain to hit the back of the net.

Despite the great work of Soper, MK Dons did add a third goal in the 81st minute. A corner was played towards the far post, and Bright rose highest to send a looping header into the back of the Argyle net.

Argyle continued to push for a way back into the game, but MK Dons held strong to hold onto their first league win of the season. It was a tough result to take for Argyle after their recent improved performances, but they will now go into a two-week winter break, giving them plenty of time to reflect on how they can have an improved 2022.