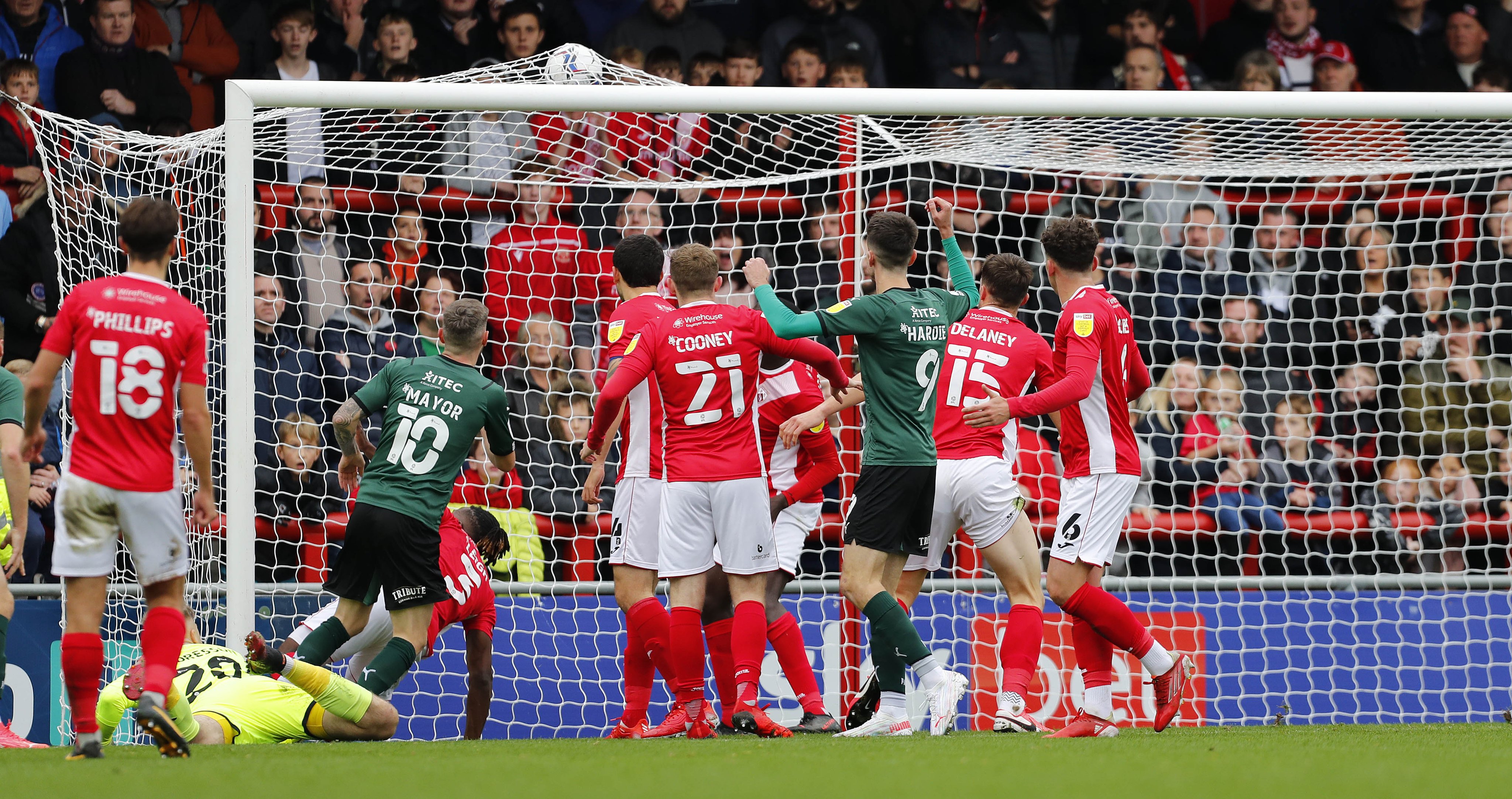 Argyle extended their fantastic unbeaten league run to 14 games on an afternoon of mixed emotions at Morecambe.

After falling behind early to a goal from Jonah Ayunga, it was a decent point on the road, with Danny Mayor opening his account for the season with a close-range finish on 12 minutes.

However, the Pilgrims will look back on a number chances created, and narrowly missed, in the first half but credit to the Shrimps for tightening up their defences after the break.

Argyle manager Ryan Lowe made two changes from the midweek win over Bolton, Mayor and Luke Jephcott starting ahead of Ryan Broom and Jordon Garrick. Entering the game on a run of four defeats, Morecambe boss Stephen Robinson included former Pilgrims Anthony O’Connor and Toumani Diagouraga in his side.

Jordan Houghton demonstrated his delightful passing range in the early exchanges but it was the home side first to strike, with Ayunga stroking a tidy finish back across goal and into the far corner after a spell of pinball in the Argyle box.

The lively Ayunga found space again moments later, picking up a long ball in the left channel for a drive to the near-post, which was well held by Mike Cooper.

It took 12 minutes but Argyle woke up with a scrambled equaliser, although it started with a slick move down the left involving Conor Grant and Mayor. The ball was slid inside for Ryan Hardie to prod goalwards and then ricocheted around the six-yard box before Mayor forced it over the line.

Mayor immediately delved back into his bag of tricks with a brilliant body swerve and square pass for Luke Jephcott, who was denied a certain goal by terrific goal-line covering from O’Connor.

The Greens were devastating down the left, Mayor releasing Grant for another perfectly-placed low cross but Jephcott’s first-time effort was too high to trouble Morecambe ‘keeper Jokull Andresson.

It was a terrific game on the Lancashire coast, with Jephcott and Joe Edwards conjuring room for another Mayor shot, expertly saved on the stretch by Andresson and Panutche Camara was fractionally offside for the rebound.

The Pilgrims were first to the ball all over the park, creating the next chance through Dan Scarr’s lofted pass following a corner and Hardie steered his header inches past the post.

A Grant cross was then volleyed off target by Edwards and Brendan Galloway sliced a shot wide, as the relentless Argyle pressure continued. Morecambe greeted the half-time whistle with understandable relief but perhaps mild frustration for the Greens that dominance had not been converted into a lead.

Grant kicked-off the second period with a volley over the bar but Morecambe replied with more bright work from Ayunga, lashing a low cross for Cole Stockton, who was too high with his stabbed half-volley.

Morecambe right-back Ryan Cooney sent a dipping effort over the bar on 57 minutes, with Argyle still seeking to rediscover their first-half rhythm, attacking into an amazing contingent of 658 from the Green Army.

Excellent defensive covering from James Wilson denied Stockton from getting a shot on goal, as Lowe turned to the bench, introducing Broom for Camara. After a lull in entertainment, the game had become very open again, with another superb Wilson challenge thwarting a break from the Shrimps.

Brilliant play by Galloway teed up Broom for a shot from 20 yards, charged down by the excellent O’Connor, while Morecambe were winning a number of set-piece situations to test the Pilgrim defence.

After the fluency of the first period, Argyle were being stifled by resilient restrictive work from the hosts. It proved a successful approach and a share of the points at the Mazuma Stadium.