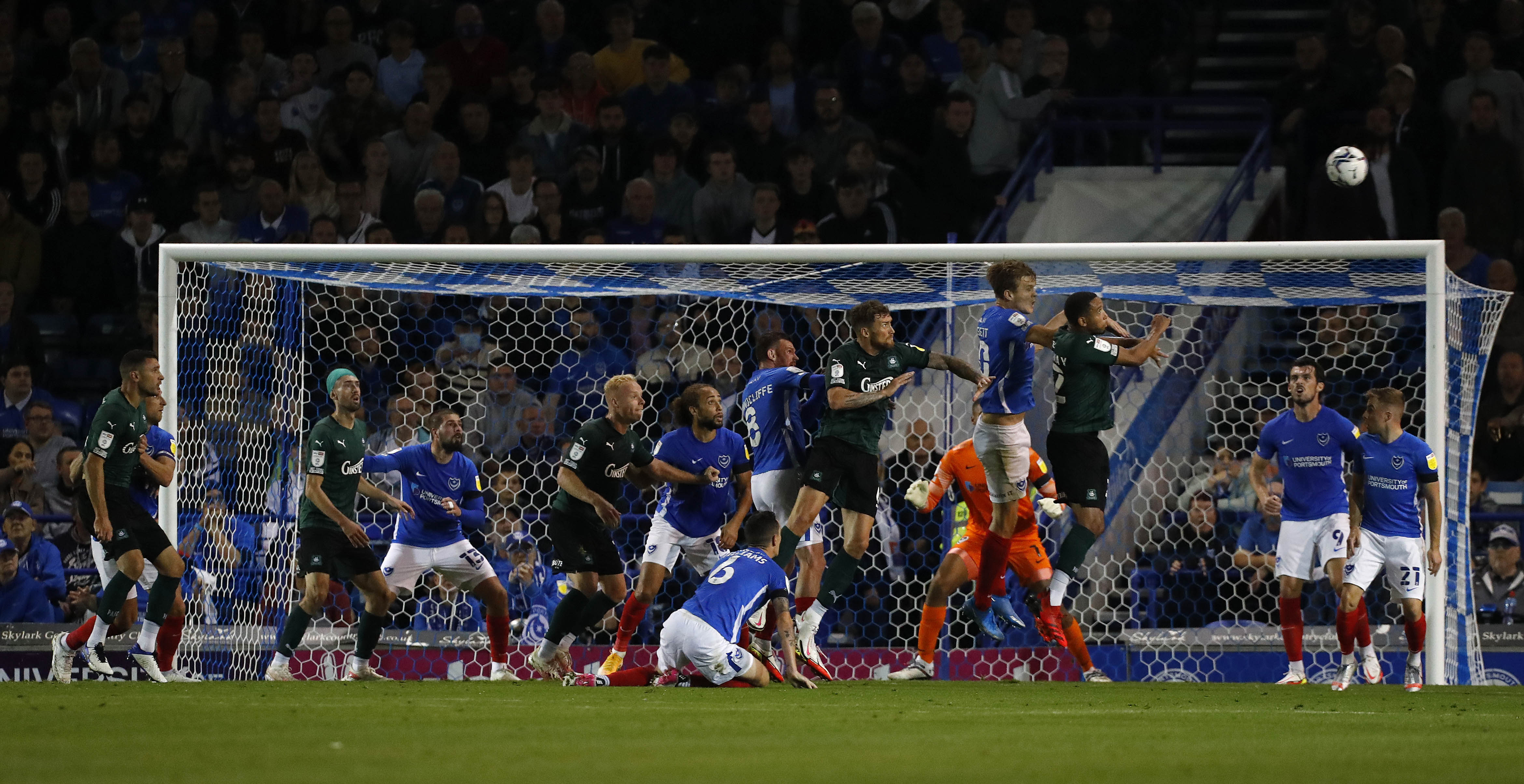 Under the Fratton Park floodlights, the Pilgrims and Pompey served up a Sky Bet League One treat, full of passion, pace and power.

Both sides were relentless in their approach but Ryan Hardie stood above the rest with two exquisite second-half finishes after Lee Brown had given Portsmouth an early lead.

Argyle were moments away from a win that would take us top of the table when an industrial ball into the box was nodded down for Sean Raggett to prod home a last-gasp leveller.

Argyle boss Ryan Lowe made just one change from the weekend win at Wimbledon, captain Joe Edwards returning to the right flank in place of Jordon Garrick, while Portsmouth manager Danny Cowley opted for three alterations from the defeat to Cambridge, bringing in John Marquis, Joe Morrell and Kieron Freeman.

Pompey won an early free-kick when Conor Grant slipped into Mahlon Romeo, earning the Pilgrim wing-back a booking inside four minutes, and even bigger punishment as Brown rifled his set-piece under the jumping Argyle wall, giving Mike Cooper no chance at the near post.

The goal naturally gave Portsmouth a boost and when a Romeo cross was partially cleared, Cooper found a fine reaction save to deny Ryan Tunnicliffe from the rebound. Ronan Curtis glanced a header wide from the resultant corner.

Hardie, meanwhile, returned to the fray with a hefty green bandage after a cut to the head and Argyle were toiling hard to find some attacking impetus in their play.

Joe Morrell and Panutche Camara exchanged handbags on 24 minutes, with Ronan Curtis earning himself a booking for an unnecessary involvement. Grant took the eventual free-kick, curled tantalisingly a fraction beyond the deep run of Dan Scarr.

Hardie ignored the tetchy nature of proceedings to fizz a left-foot drive from 20 yards, tipped wide by Gavin Bazunu, while Camara was on the receiving end of some rough treatment, perhaps a backhanded compliment to his fine form this season.

Gradually, the Greens began turning the screw with successive corners, ending with a James Wilson half-volley driven wide, followed by a low Grant cross cleverly flicked inches past the post by Hardie.

The second period opened with a Hardie shot scuffed into the arms of Bazunu. Marquis replied with an effort blocked by Wilson and no respite in the frenetic pace of the game.

Back up the other end, and the man with the green head bandage raced clear from a Camara pass, tempted Bazunu to come off his line and dinked a sublime finish over the prostrate Pompey custodian to level the scores.

Luke Jephcott took up the mantle next and an untidy barge to the ground prompted polite penalty appeals. Dusting off the disappointment, Jephcott then headed wide from an Edwards cross.

The terrific tempo continued past the hour and a brilliant twisting run from Camara released Jephcott, but credit to Bazunu for launching himself at the shot to make a super save. Ryan Broom bravely blocked a Romeo shot just a minute later and Cooper held on to the rebound header from Curtis.

Portsmouth conjured another opening when Curtis stretched to reverse a pass back across goal for Marquis, who, thankfully, was also at full stretch, and unable to guide the ball inside the far post.

Argyle were far from holding on, however, with Hardie pouncing on a loose pass and his square-ball to Jephcott was just about cleared by Raggett. Brendan Galloway did find Jephcott with the next cross and Bazunu was forced into a marvellous save to thwart a potential Pilgrim winner.

Galloway swiftly transformed from winger to last-ditch defender, superbly getting in front of Marquis to prevent a certain goal. Seconds later, Argyle were in front, and a copy of the first.

Camara steered another sumptuous pass into the channel for Hardie, who, again, lured Bazunu from his line, this time rounding the Republic of Ireland international before rolling the ball into the empty net.

After the brilliance of Hardie in front of goal, Argyle reverted to defensive mode in the closing minutes and so nearly held out for another fabulous three points, but Raggett intervened with seconds left on the clock.