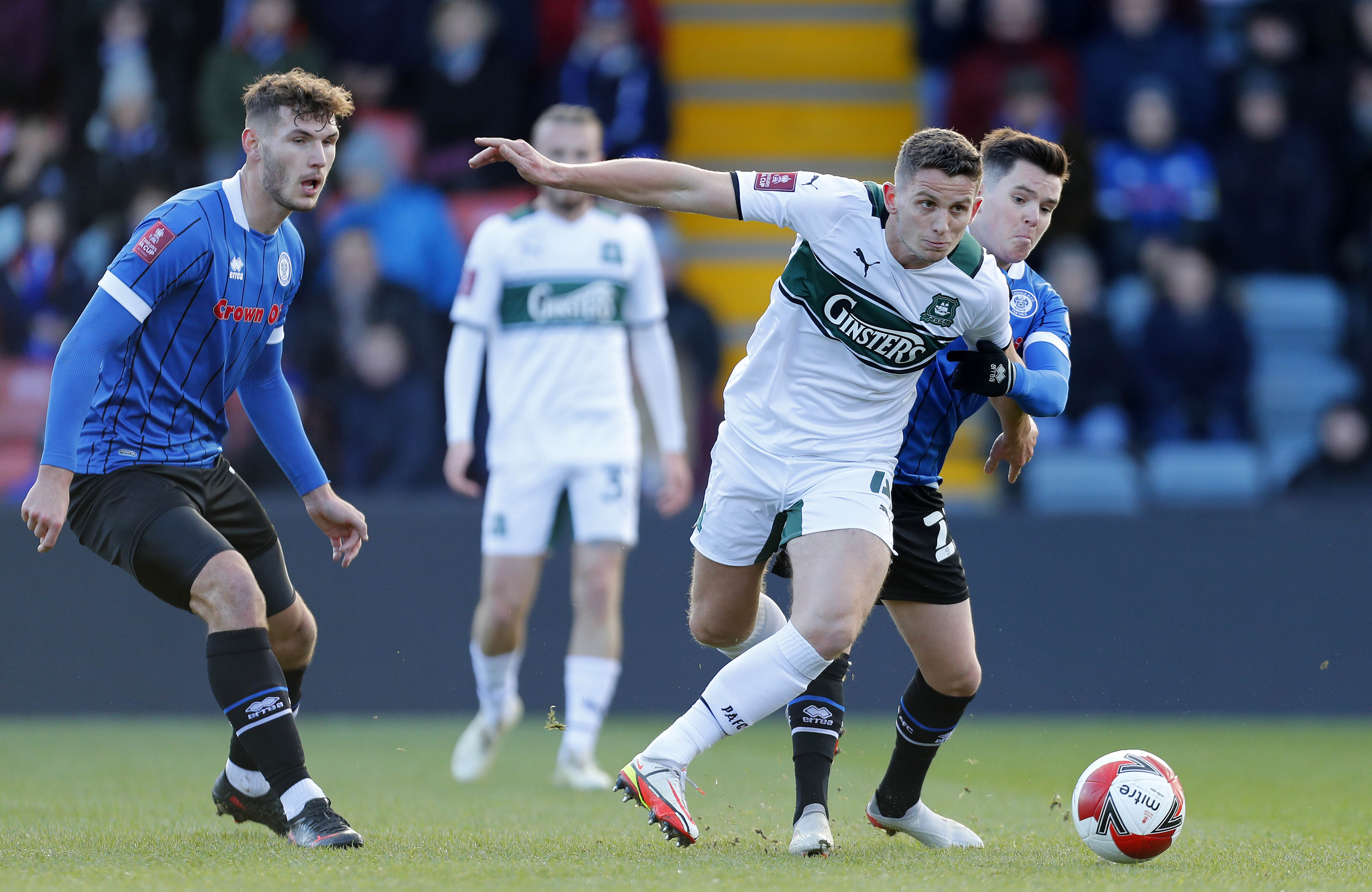 Luke Jephcott’s goal, four minutes from time, and less than 120 seconds after coming off the bench, put Argyle into the Emirates FA Cup third round after a topsy-turvy encounter at Rochdale.

Argyle, who looked the class act through the bulk of the first half, led at the break through Jordon Garrick’s superb header, but were pegged back by a resurgent Dale after the interval, with Aaron Morley’s excellent long-range effort a worthy equaliser.

Jephcott, though, on as a late replacement, nabbed a goal from close range after Rochdale failed to deal with a corner, and sent The Pilgrims into the draw on Monday evening.

Rochdale is the home to Co-op, and the was the stage of the return of the Coop.

Ten days short of a year since his last start, George Cooper returned to the Argyle starting line-up at left wing-back. Jordon Garrick was preferred alongside Ryan Hardie up front, while manager Ryan Lowe made a bold choice in midfield, playing Ryan Broom and Danny Mayor in the same central trio.

With nine substitutes allowed to be named in the FA Cup, there was a welcome inclusion of Niall Ennis and James Bolton for the first time this season, alongside the three men dropping down to the bench, namely Panutché Camara, Jephcott and Conor Grant.

Rochdale, for their part, did name a Conor Grant in their starting line-up. Indeed, their version of C Grant and 10 others kept their spot from Dale’s last game, a 1-1 draw against Exeter.

Rochdale quite like a draw. They went into this game having drawn five of their last six league matches, including their last three at home. Even their goal difference shows symmetry: 24 goals for, 24 against. And 24 points, just to keep it neat. A replay was a cert then, right?

The first time these two sides met was in this famous competition, coming up for 101 years ago, with Argyle prevailing 2-0. The 34 subsequent meetings have all been league ties, and a few visits to what is now the Crown Oil Arena hold special places in the Argyle story. Promotion in 2002, survival in 2013, and even a 6-0 win in 1973.

Rochdale had the best of the early exchanges, dominating possession, although creating precious little by way of the chances. Their best moment came when a cross from the right was missed by striker Josh Andrews when in a good position. The clearance fell to Eoghan O’Connell, whose shot from distance was easily caught by Cooper.

It took 12 minutes until Argyle fashioned what appeared a to be good chance, a patient build-up eventually getting Joe Edwards in behind the Dale defence, but a flag was raised just as the skipper rolled his shot wide.

From the next attack, Argyle took the lead. There was a touch of fortune about it, as a cross from George Cooper that found Ryan Hardie did so with the latter in an offside position. However, the flag stayed down, Rochdale’s clearance was not sufficient, and the ball fell to Broom. His gorgeous far post cross from the right bamboozled defender Max Taylor, but not Garrick, who powered home a header from eight yards.

It was Garrick’s fourth Argyle goal, his third in this competition, and not only did it give the Pilgrims the lead, it gave them confidence. Suddenly it was the men in white and green winning more 50/50 challenges, picking up more loose balls, and dictating the pace of play.

It appeared that the message from the coaching staff was to focus on Rochdale’s channels, with the running power of Hardie and Garrick troubling Dale’s defenders. One such ball found Hardie, who put the ball in the net, but was flagged offside. In truth, he was probably closer to being onside than in the build-up to the goal.

Argyle were in their groove now. A flowing run of passes nearly got Edwards in again, as he burst in from the right flank, and then a smart exchange between Garrick and Hardie worked a ball for Broom, timing his run perfectly through the centre, but not quite getting his feet set, and shooting wide.

The Argyle fire cooled a little, though, and Rochdale began to work their way back into the game as half-time approached. Beesley headed wide when Mike Cooper came for – and missed – a cross, and a late flurry of Dale set-pieces, although not causing specific issues, were unwanted.

Rochdale brought on Aiden White for Grant at half-time, and their reshuffle, including shifting the lively Abraham Odoh into midfield, worked the oracle. It was Dale who looked to have been energised by the interval, and within ten minutes of the restart, they levelled.

James Wilson will be disappointed at the circumstances, as he cheaply gave the ball away to Andrews, but Rochdale still had a lot to do. Andrews offloaded to Morley, who took a touch to set himself, then curled in delightfully from 25 yards. The quality of the hit, and Rochdale’s start to the second period, meant it was hard to begrudge them parity.

Moments before the equaliser, George Cooper had been replaced by Ryan Law, and it was Law who had a chance to immediately restore Argyle’s lead. He found himself free, six yards out, after Edwards’ brilliant header across goal, but all Law could do was steer his headed effort straight into goalkeeper Jay Lynch’s hands.

The goal had awoken Argyle, though, and suddenly their attacks had renewed vigour. A flurry of corners included one which saw Rochdale put in a couple of superb blocks to deny Ryans Broom and Law, either side of a ricochet against Wilson which hit the post.

Wilson was a shade lucky, minutes later, to still be on the field, as Beesley was fouled, and Law was cautioned. However, it was probably Wilson, already on a yellow, who made initial contact.

Having survived Argyle’s initial riposte, Dale went on the front foot again, with Beesley dragging a shot wide when inside the area, and with a little more space than he realised, but it was Argyle who next went closest to a precious third goal of the game.

Law’s burst down the left allowed space for Mayor, who approached the area, checked onto his right foot and sent a curling shot goalwards. Lynch stood prone, watching the shot beat him, but the ball cannoned against the same post Argyle had already struck.

Argyle’s chances were oases, though, as generally it was the home side who had the best of matters. Morley, confidence flowing after his televised, stunning equaliser, tried again from a difficult angle, and found the roof of the net…fortunately for Argyle, it was on the outside.

Having already introduced Camara, Ryan Lowe brought on Jephcott and Ennis for Hardie and Garrick for a late throw of the dice.

Argyle’s best passing spell of the second half led to a Macaulay Gillesphey cross towards Jephcott, which deflected out for a corner. Jordan Houghton’s delivery missed heads in the six-yard area, but struck the body of Beesley, and fell perfectly to Jephcott, who swept home from close range.

There was time for fellow sub Ennis, making his first appearance this season, having broken down injured in the opening-day warm-up, to make a lively cameo too, making two direct runs to the heart of Dale’s defence, and remind us why he entranced us last season.

Rochdale were not finished, though, and a stoppage-time header from Beesley looked odds-on to level things again. Cooper, though, saved brilliantly with his feet, and Gillesphey followed suit with a sliding block on the same player.