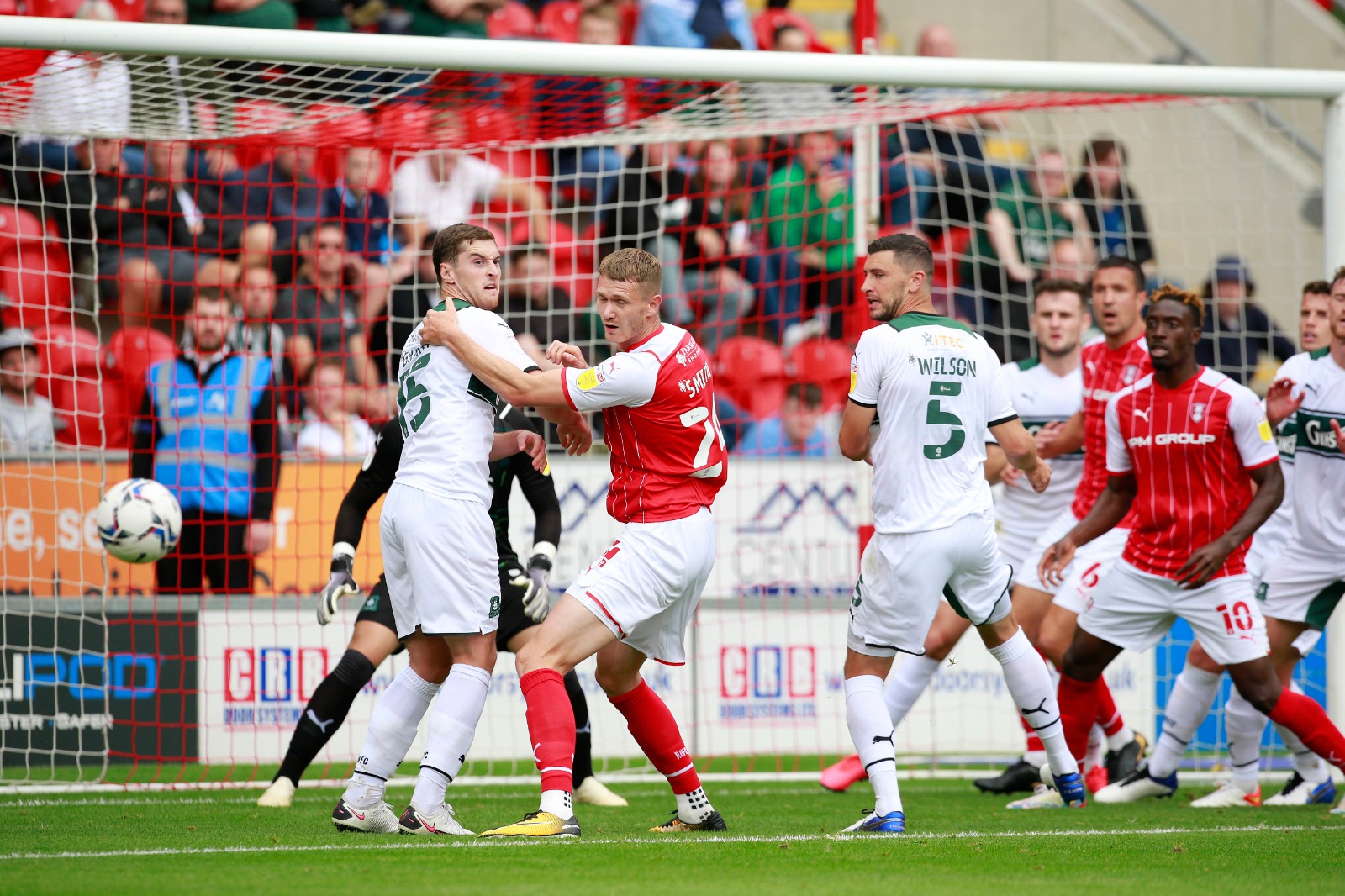 Freddie Ladapo broke the deadlock with a scruffy opener on 10 minutes and Ben Wiles executed a super finish to confirm the home victory before half-time, as Pilgrim endeavours were unable to breach the Rotherham defence.

Niall Ennis and Luke Jephcott were initially given the nod in attack, but an injury to Ennis in the warm-up handed a starting berth to Ryan Hardie, while Rotherham boss Paul Warne included former Pilgrim Ladapo in his team.

An early corner for Argyle was half-cleared to Houghton on the edge of the area and his technique on the volley was spotless, with the accuracy radar just a fraction too high to trouble ‘keeper Viktor Johansson.

The Millers were in front from their own corner routine on 10 minutes, as a whipped near-post delivery bounced around the six-yard box before Ladapo poked the ball past Mike Cooper.

Buoyed by the goal, Rotherham continued to threaten from set-piece situations, forcing Cooper into a couple of important claims, as Argyle looked to gain a foothold with the strong running of Camara and Mayor in midfield.

A searching cross from Edwards was inches too high for the run of Jephcott and that was followed by a delightful free-kick by Grant picking out Scarr for a header powered over the bar.

Argyle were enjoying an encouraging spell and another free-kick from Grant was comfortable for Johansson, quickly followed by a Houghton drive tipped over by the Rotherham custodian.

The Greens were winning the midfield tussle and another jinking run from Mayor very nearly created room for a Jephcott attempt, but the Greens then found themselves two behind, with Wiles curling a precise finish into the corner after a swift break down the right.

Argyle ended the half with more positive attacking work, winning three successive corners, but desperate Rotherham defending kept their goal intact. Hardie opened the second period with an attempted lob narrowly off target after a loose pass from the Millers.

The Pilgrims were the side in the ascendancy, throwing men forward in search of a foothold in the game, with the incredible Green Army making a terrific noise in their return to away day football.

Ladapo muscled his way into a good position on 55 minutes and Cooper was relieved to see the eventual shot lacking genuine power to cause a real problem. Rotherham then introduced new signing Ollie Rathbone for Dan Barlaser in midfield.

The first Pilgrim switch saw Ryan Broom handed a debut as replacement for Mayor on the hour and time was beginning to work against Argyle, with a mild penalty claim for a scruffy Ladapo challenge on Scarr waved away by referee Sebastian Stockbridge.

The Millers conjured a promising chance in the left channel for Ladapo but Cooper was in the right position and, with Ennis unavailable, Academy forward Rhys Shirley was given a professional debut in place of Jephcott, while Adam Randell replaced Grant.

On an afternoon of near-misses, Hardie was just crowded out of a shot on goal by strong defending from Wes Harding after again sniffing around for an opportunity in the penalty area.

At the other end, a fine block from James Wilson prevented Ladapo getting his shot on goal and Argyle will dust themselves down for a midweek trip to Peterborough in the Carabao Cup.