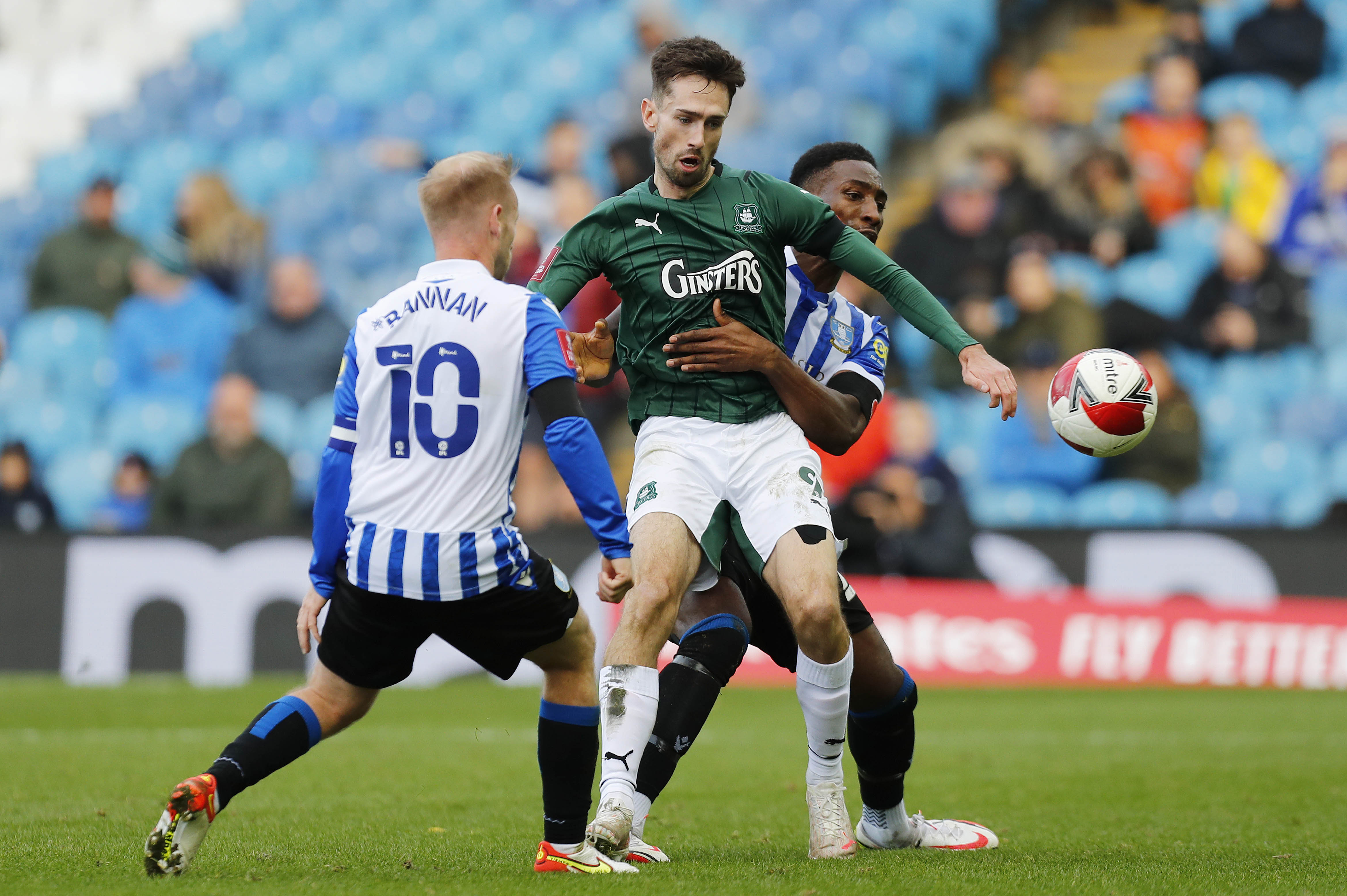 Argyle played out a goalless draw away at Sheffield Wednesday to book an Emirates FA Cup First Round Replay at Home Park.

Clear-cut chances were few and far between at Hillsborough, but both sides will be left feeling they could have done enough to advance to the Second Round of the FA Cup today.

Argyle’s best chance of scoring the decisive goal came after Jordon Garrick’s initial effort was bravely blocked, before his rebound was spectacularly kept out by Northern Ireland ‘keeper Bailey Peacock-Farrell. Whereas Sheffield Wednesday will be ruining a late golden opportunity by Lewis Wing in the final moments of the tie.

Argyle boss Ryan Lowe made two changes from the side that defeated Ipswich Town last weekend, with former Owl Danny Mayor in for Ryan Broom, and Jordan Houghton returning from suspension in place of Adam Randell. Meanwhile, Conor Grant made his 100th appearance for the Greens.

Sheffield Wednesday manager Darren Moore made one change from Wednesday’s 3-0 win over Sunderland on Tuesday night. Former England under-21 striker Saido Berahino started in place of Lee Gregory alongside Florian Kamberi up front.

The best chance of the early exchanges came after Panutche Camara nicked the ball deep inside the Argyle half, launching a lightning-quick counter-attack, carrying the ball with purpose deep into Wednesday territory. A one-two with Ryan Hardie saw Camara enter the box, but his left footed effort was scuffed and somewhat comfortably saved by the legs of Bailey Peacock-Farrell.

Once again, a Camara-Hardie combination unlocked the Wednesday defence just before the half hour mark. Another smart give and go released the midfielder down the left and his early cross was slightly overhit, forcing Hardie wide and unable to get a shot off due to the narrow angle. His pull-back was met by an onrushing Joe Edwards, but his low effort was deflected wide of the near post.

The teams went into the break level after a relatively uneventful first half. Jephcott and Hardie’s clever movement and pace running the channels looked to be Argyle’s biggest threat and chance of finding an opener, whilst Wednesday had a number of dangerous looking crosses from the right-hand side comfortably dealt with by Michael Cooper.

Wednesday started the second half well, with Albanian striker Florian Kamberi forcing Cooper to make a save from a tight angle, before Barry Bannan attempted a spectacular first-time effort from the edge of the box which sailed over the crossbar by some distance.

Argyle hit back through Grant, coming the closest to opening the scoring with a trademark thumping left-footed effort from range that very narrowly cleared Peacock-Farrell’s bar.

Wednesday looked to gain a foothold in the game midway through the second half, and through some very neat build up play, including a back heel from the newly introduced Dele-Bashiru, sent Liam Palmer into the Argyle box. His strike from a dangerous position was straight at Cooper, who held it well.

Barely a minute later, Berahino found himself in an optimum position to open the scoring on the left-hand side of the Argyle box and unleashed an effort at goal, for which Cooper had to be at full stretch to prevent Wednesday taking the lead.

Approaching the final ten minutes of the game, Argyle were miraculously denied an opener - not once, but twice. Jephcott turned well on the left to work some space and find Jordon Garrick, a half-time substitute in place of Hardie, in the middle of the box. His first left-footed strike was bravely blocked by Chey Dunkley. Before the rebound fell again to Garrick, who this time lifted a right foot effort from close range towards the Wednesday goal, but for a strong Peacock-Farrell hand to somehow deny his point-blank effort.

Wednesday had a wonderful opportunity to progress to the second round in the final minute of the game. A long, bouncing ball found Lewis Wing in the box with just Cooper to beat. But the ball wouldn’t fall kindly and he lashed his volleyed attempt over the bar, much to the relief of Ryan Lowe’s side.