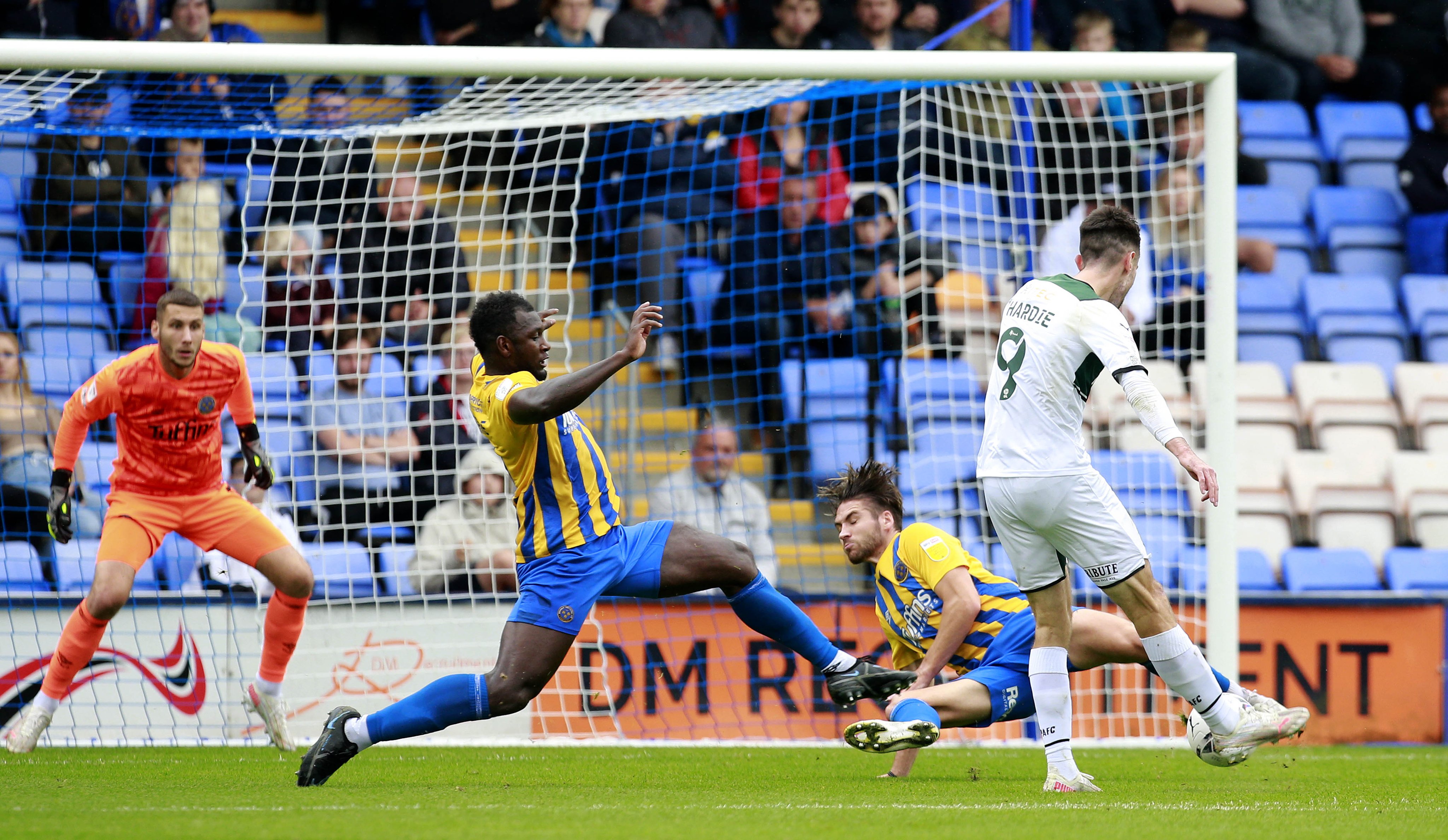 Argyle produced a fantastic away performance to secure a confident, emphatic 3-0 victory at Shrewsbury Town.

Ryan Hardie broke the deadlock on 24 minutes with a vicious finish and he then teed up fellow forward Luke Jephcott for a second just after the interval. Hardie completed a fine day for the Greens with a clever goal midway through the second half.

Argyle boss Ryan Lowe made just the one change from the midweek draw with Cambridge, Brendan Galloway coming in for the suspended James Wilson. Shrewsbury manager Steve Cotterill also made one switch, Nathanael Ogbeta replacing Josh Daniels from the 1-0 loss at Portsmouth.

The Pilgrims were delighted to welcome back George Cooper to the bench after a long spell out through injury and he was very nearly celebrating, along with all Greens, inside three minutes, when a Jordan Houghton cushioned cross almost found Galloway for what would have been an easy finish at the back post.

There was some lovely link-up play between Hardie and Jephcott in the opening 10 minutes, plus a confident start from Macaulay Gillesphey, having switched from left centre-back to the right.

It was the Shrews, however, with the first big chance, screwed wide from a good position by Sam Cosgrove. Shrewsbury’s towering number nine then scuttled a low effort from 20 yards inches beyond the far post.

Argyle required an outstanding Galloway challenge to prevent Cosgrove from getting another opening on 18 minutes and the Greens took the lead from the next attack.

Jephcott was again on the same wavelength as his strike partner, laying a perfect pass into the path of Hardie, who lashed an emphatic finish beyond Marco Marosi and into the far corner.

The Pilgrims settled into a period of calm consolidation, although a ricochet fell to Cosgrove on the edge of the area but his shot was too high to trouble Argyle ‘keeper Mike Cooper. Ogbeta followed that with an effort blazed well wide after some good initial skill to create the room.

Jephcott spurned the final opportunity of the half, scooping his shot over from a Panutche Camara pass, but still a positive 45 minutes for the Greens, rounded off by a superb defensive header from Dan Scarr with Daniel Udoh poised to level matters.

Argyle’s bright start to the second period included some clever play between Conor Grant and Ryan Broom, followed by a brilliant Houghton surge and pass to Hardie, who fed the ball back to Jephcott for a calm slotted finish to double the lead.

The precision passing of Houghton, combined with pace and power from Hardie, conjured another chance on 55 minutes, but the Pilgrim number nine was unable to wrap his foot around the ball for a meaningful shot.

Grant was forced off with a knock just before the hour, replaced by Ryan Law, and he was soon applauding yet more fabulous combination play between Hardie and Jephcott. It all came from an incisive break by Argyle and when Hardie was through on goal, he executed a sublime chipped finish to give Marosi no chance.

Shrewsbury had made all three substitutions and tried everything to find an avenue into the game, but the Pilgrims were equally resilient in their defensive work as they were ruthless in attack.

A speculative Luke Leahy free-kick curled on to the bar was a super effort for Shrewsbury and perhaps summed up a tough start to the campaign for the Salopians.

Adam Randell for Broom was the next Argyle change and Hardie welcomed the young midfielder with a tremendous curling shot on the turn, acrobatically saved by Marosi. A perfect afternoon was completed by a late debut for new signing Jordon Garrick in place of Jephcott.

Very impressive in all departments from Argyle.