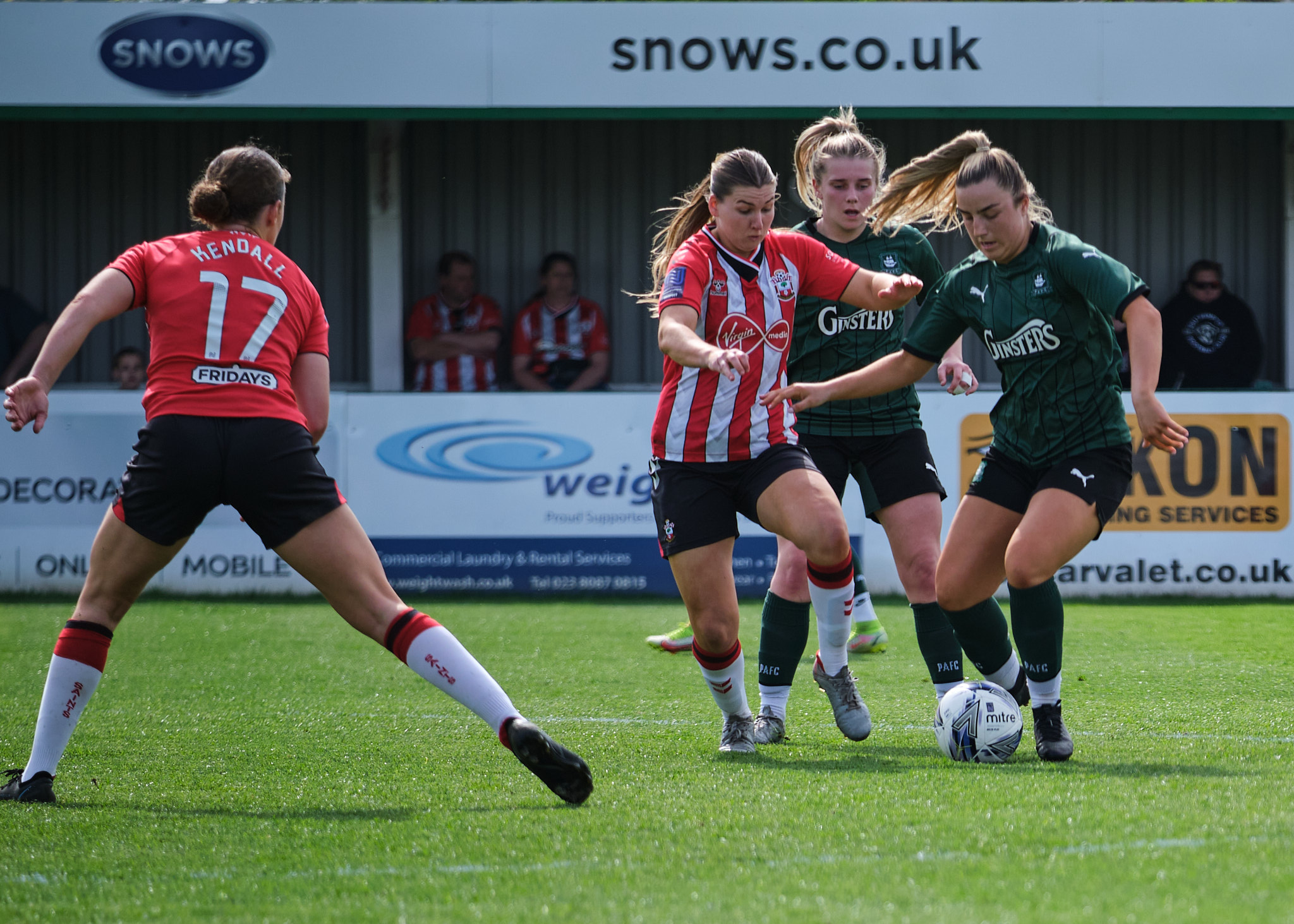 Plymouth Argyle Women fell to a heavy defeat away to champions-elect Southampton despite a performance full of character and endeavour from Ryan Perks' young side.

The Pilgrims were behind before a ball was kicked, with several players missing out with injury, leaving Argyle with only one substitute after Lucy Hack was added to Argyle’s ever-growing injury list.

It meant that 16-year-old Ruby Murphy came into the team to make her first start for The Pilgrims. Argyle were also able to hand a debut to new signing Charlotte Whitmore after she co-signed from St Austell two weeks ago.

It was always going to be a tough afternoon away to the league leaders, but it was a quick start from the Saints, who could have taken the lead after six minutes.

A long-distance shot cannoned off the Argyle bar, but the backspin on the ball brought it back into Argyle’s six-yard box, and it took a combination of Read & Giota to deflect the ball clear before a Southampton player could get a touch on the ball.

Southampton followed up their quick start after a loose ball fell to Kendall on the edge of the box, but she fired over the Argyle bar.

After weathering the early Southampton pressure, Argyle began to grow into the game, with debutant Whitmore impressing with her hold up play and combining well with pacy winger Amber Pollock.

The pair nearly combined to great effect in the 23rd minute when Whitmore burst behind the Saints’ defence and cut the ball back to Pollock, whose shot on the spin cannoned off the inside of the post and the rebound was cleared by a Southampton defender.

It would prove to be a decisive moment in the match as only three minutes later, Southampton took the lead.

Argyle pushed forward but lost the ball in transition, and The Saints hit them on the counterattack. Pharoah slid Watling through on goal, and she finished into the bottom corner to give them the lead.

Argyle looked to respond with a succession of corners, but it was Southampton who would get the next goal, doubling their lead in the 40th minute. Murphy played a short back pass to Read, which was intercepted by Pharoah, who fired in the Saints’ second goal.

The goal visibly boosted the home side, who then added a third goal four minutes later. Kendall found herself free from a corner, and she planted her header into the back of the net for the third goal on the stroke of half-time.

Argyle started the second half well and nearly found a way back into the game in the 46th minute.

Whitmore again showed good feet to skip past her marker before playing the ball to Pollock inside the area, but Rendell was quick off her line to smother her shot behind for a corner.

It was an encouraging start to the second half for Argyle, but that encouragement was short-lived as Southampton added a fourth in the 52nd minute.

Freeland picked the ball up outside the Argyle box and arrowed a superb shot into the top left corner for the Saints’ fourth goal.

Despite plenty of attacking endeavour from Argyle it was Southampton who scored the next goal in the 65th minute. A cross from the left-hand side found Kendall free in the box again, and she planted her header beyond Read for Southampton’s fifth goal.

It would have been easy for Argyle to give in after the fifth goal, but they continued trying to get back into the game and found a consolation goal in the 68th minute. Southampton cleared the ball to Cunningham on the left-hand side, and she sent a stunning right-footed volley beyond Rendell and into the top right-hand corner.

Argyle pushed on for more goals, and in the 75th minute, they found Alphous free in the box, but her first-time effort was deflected behind for a corner. From the resulting corner, Southampton hit Argyle on the counter and got Pusey one on one against Read. She rounded the Argyle keeper, but Cunningham made a superb recovery run to get back and block Pusey’s goal-bound shot.

The Greens continued to push for another goal, and in the 82nd minute, Ireland slid Alphous in behind, but her snapshot went narrowly wide of the far post.

Then with the clock ticking away, Southampton added a late sixth goal in added time. Rafferty found herself free from a corner and fired in Southampton’s final goal from close range to add more gloss to the scoreline before the final whistle.

It was a difficult result for Argyle, but with a crucial home match against basement side Hounslow next week, The Pilgrims will have the perfect chance to respond in their quest to stay in the division.