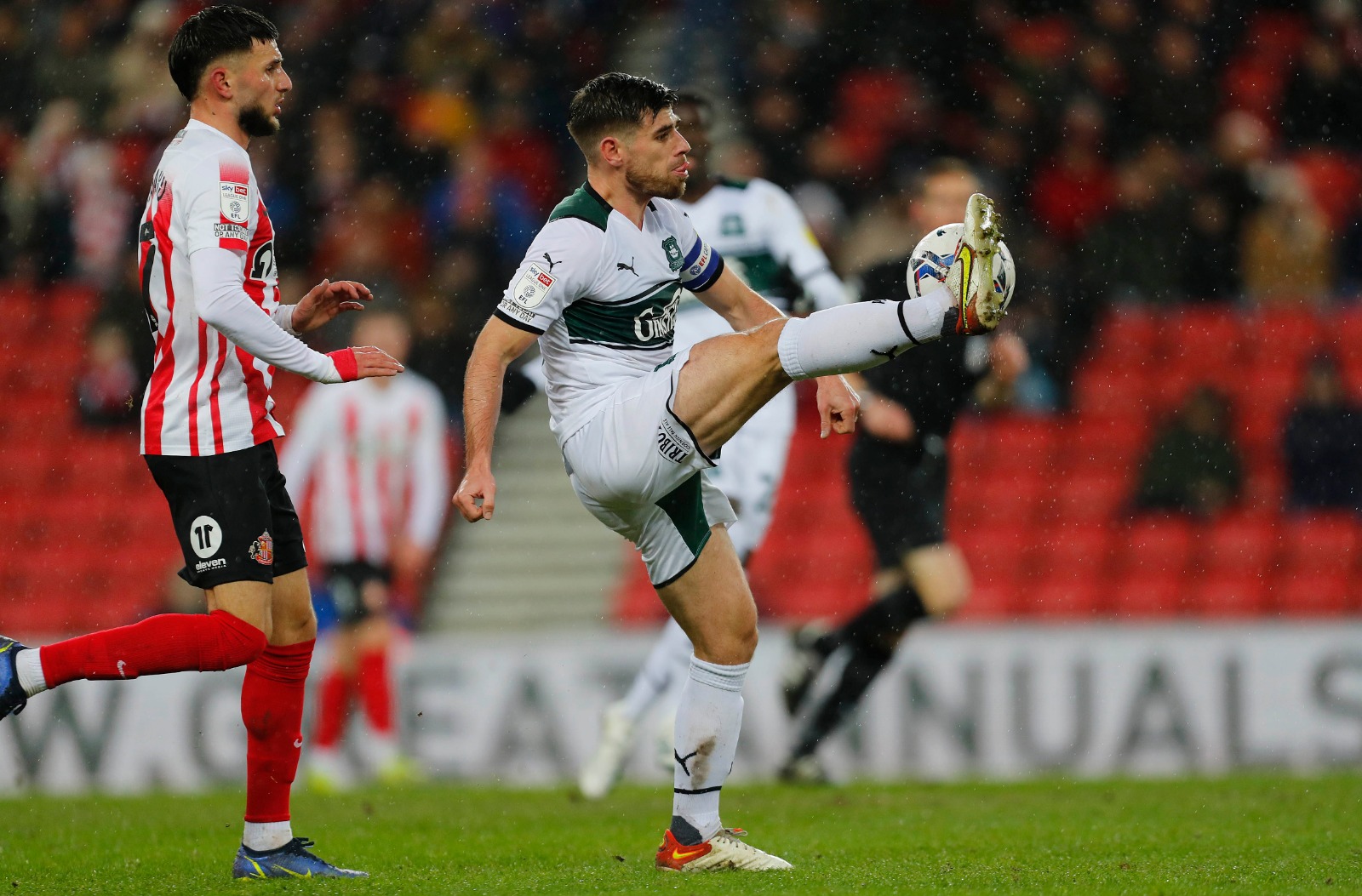 Argyle, and the Green Army, have covered almost 1,900 miles over the past six days, a distance that would take you most of the way across the United States, and the final trip to Sunderland just proved a step too far.

Quickfire goals from Daniel Neil and Nathan Broadhead had the travel-weary Pilgrims on the back foot in early stages, but the second-half response was full of spirit and fitness.

Dan Scarr halved the deficit just past the hour and the Greens gave everything in search of a leveller, but that one final chance failed to arrive.

Argyle manager Steven Schumacher made two changes from the midweek draw at MK Dons, with Conor Grant and Luke Jephcott replaced by Jordon Garrick and Ryan Broom, who began the game in an unfamiliar left-wing back role.

The nightmare start after the longest trip of the season arrived with a cleverly-worked corner from the Black Cats, firing a low cross into the near post and the ball was diverted into the path of Neil for a fine finish in the bottom corner.

A fabulous save from Mike Cooper moments later ensured Argyle stayed in the early running, palming the ball clear after a break into the right channel and a stabbed effort from Leon Dajaku.

Sunderland smashed five past Morecambe on Tuesday evening and were playing with understandable belief, but their momentum was briefly clipped by Garrick and Joe Edwards working an angle for a cross to James Wilson for a volley skewed wide.

Sadly for Argyle, the second did arrive on 13 minutes, Dajaku again causing problems with a driven low cross, which was superbly flicked past Cooper by Broadhead at the near post.

Broom and Edwards switched flanks in an attempt to change the pattern but the respite was fleeting, Ross Stewart steering a half-volley over after more good work from Dajaku.

Gradually, the Pilgrims settled into their game on a wet Wearside but the period of calm was interrupted by a slip from Macaulay Gillesphey and the ball was slipped inside for a Broadhead drive beaten away by the fists of Cooper.

The Greens controlled possession in the closing stages of the first period, without conjuring a real opportunity to trouble home custodian Ron-Thorben Hoffman but, after such a torrid opening, the game was still alive at half-time.

Argyle restarted with a whipped low cross from Broom toward Ryan Hardie, cleared under pressure by the Sunderland defence. Hardie, however, did pick up on a long ball over the top and cut inside for a shot saved by Hoffmann.

Moments later, Mayor jinked past his man beautifully for an effort deflected into the path of Panutche Camara, who was also denied by a defensive block. Mayor then forced a good low save from Hoffman in a terrific spell of pressure from the Greens.

Temperatures rose inside the Stadium of Light with committed tackling from both sides, prompting a yellow card for home boss Lee Johnson after some irate protests. Argyle, meanwhile, introduced Niall Ennis for Broom, with Garrick moving to wing-back.

Ennis immediately won a corner, glanced out for another on the opposite wing, and Jordan Houghton’s delicious inswinger was powered over the line by the head of Scarr. Game on for the Greens.

Scarr then found a last-ditch tackle to maintain the recovery hope after a low cross from the left and it was Cooper next to the rescue, expertly saving high to his left after a curling effort from Broadhead on the break.

Adam Randell for Camara was the next Pilgrim change on 70 minutes but it was Dajaku who returned to the fore with a curler sent inches wide.

Wilson produced an astonishing goal-line clearance from substitute Aiden O’Brien to keep the Greens alive and Cooper then saved a Dajaku shot from a tight angle, as Jephcott replaced Houghton for the last throw of the dice.

It was not to be for Argyle but a fantastic effort after a very long week.