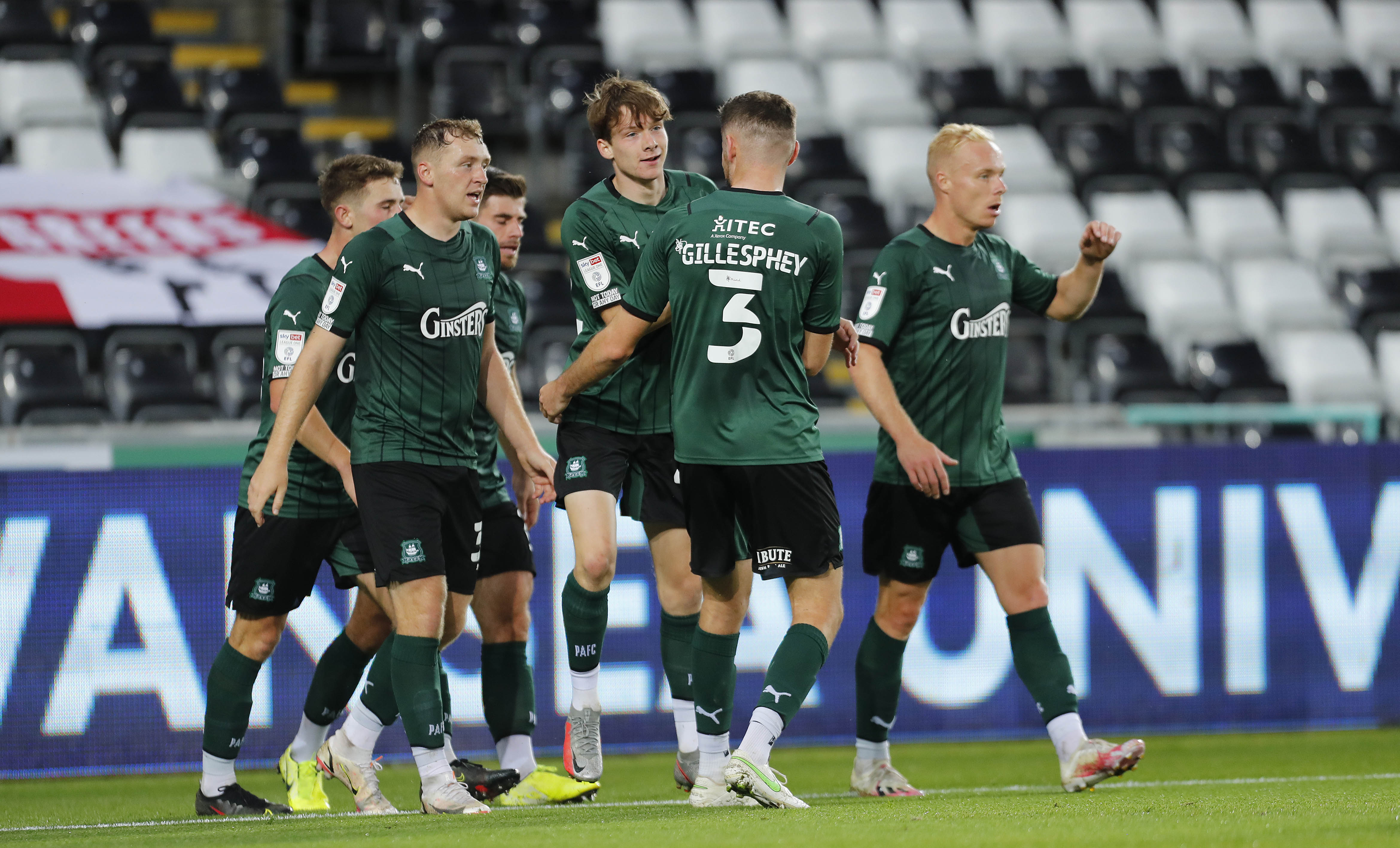 Three late goals ended Argyle’s journey in the Carabao Cup at Swansea City, despite a decent display and a special Academy goal.

Daniel Williams opened the scoring with a deflected strike on the half-hour but Rhys Shirley, an exciting young apprentice, emerged from the bench to volley the Greens level on 64 minutes.

The game was heading to penalties until Morgan Whittaker proved the difference with a hat-trick of quality finishes in the latter stages.

Swansea boss Russell Martin freshened up his side from the 1-0 win at Bristol City but it was Argyle first to threaten through Ryan Hardie’s weaving run, although the hosts hit back via a Whittaker header deflected wide.

The frenetic start continued with both teams throwing men forward, Burton calmly snaffling a scuffed effort from Jake Bidwell, followed by a delightful move involving Ryan Broom and Hardie releasing Law in the left channel, but the youngster just hesitated to shoot at the crucial moment.

Swansea attempted to settle the pace with their trademark possession football but Argyle’s relentless pressing and counter-attack was proving a major concern for the Championship side.

It was, therefore, a cruel goal for Argyle to concede on 29 minutes, as a low drive from Williams took a deflection that just had enough to squeeze past Burton in the Argyle goal.

The opener naturally gave Swansea a lift and after Jamal Lowe went close, Burton was forced into a save to deny Whittaker. Argyle replied with a Panutche Camara surge, illegally halted in the midfield by a retreating Ryan Manning.

The half ended with a period of Swansea keep-ball but, apart from one deflected strike, Argyle were still very much in the game. The Swans introduced Brandon Cooper for the cautioned Manning at half-time.

Swansea conjured the first opening after the restart with a Kyle Joseph header bravely blocked by Dan Scarr and Camara was immediately set off on another rampaging counter, again stopped by a slightly cynical foul.

Sharp work from Luke Jephcott then intercepted a loose ball but his attempted pass for the breaking Hardie was just off target. Broom took up the mantle with a tremendous burst down the left and square ball to Camara, who saw two efforts blocked by Bidwell.

Shirley was given his chance for Hardie and a hugely encouraging five homegrown Pilgrim products on the pitch, plus three more still on the bench. Jordan Houghton for Camara was the next Argyle change.

A fantastic sweeping move involving Randell, Joe Edwards and Broom created space for a Law cross cleared under pressure by the Swans. Moments later, none of the Championship defenders could handle the run and finish from Shirley, expertly tucking away a terrific deep cross by Houghton.

Argyle’s final change was an emotional one, George Cooper back on the pitch after an eight-month injury absence, replacing Law. The Pilgrims were thoroughly enjoying their evening, popping passes around against a side renowned for their possession game.

Unfortunately, from nowhere, Whittaker found space to fire in the decisive goal, curling a dipping shot into the bottom corner from 20 yards. It was very harsh on the Greens but still ten minutes on the clock to force a penalty shoot-out.

A sumptuous cross from Cooper, King of the Assist, picked out Edwards for a header steered narrowly over on 83 minutes but Swansea then sealed their win with a super goal, Lowe racing down the left and squaring for Whittaker to fire past the stranded Burton before the Swansea poked in number four on 90 minutes.