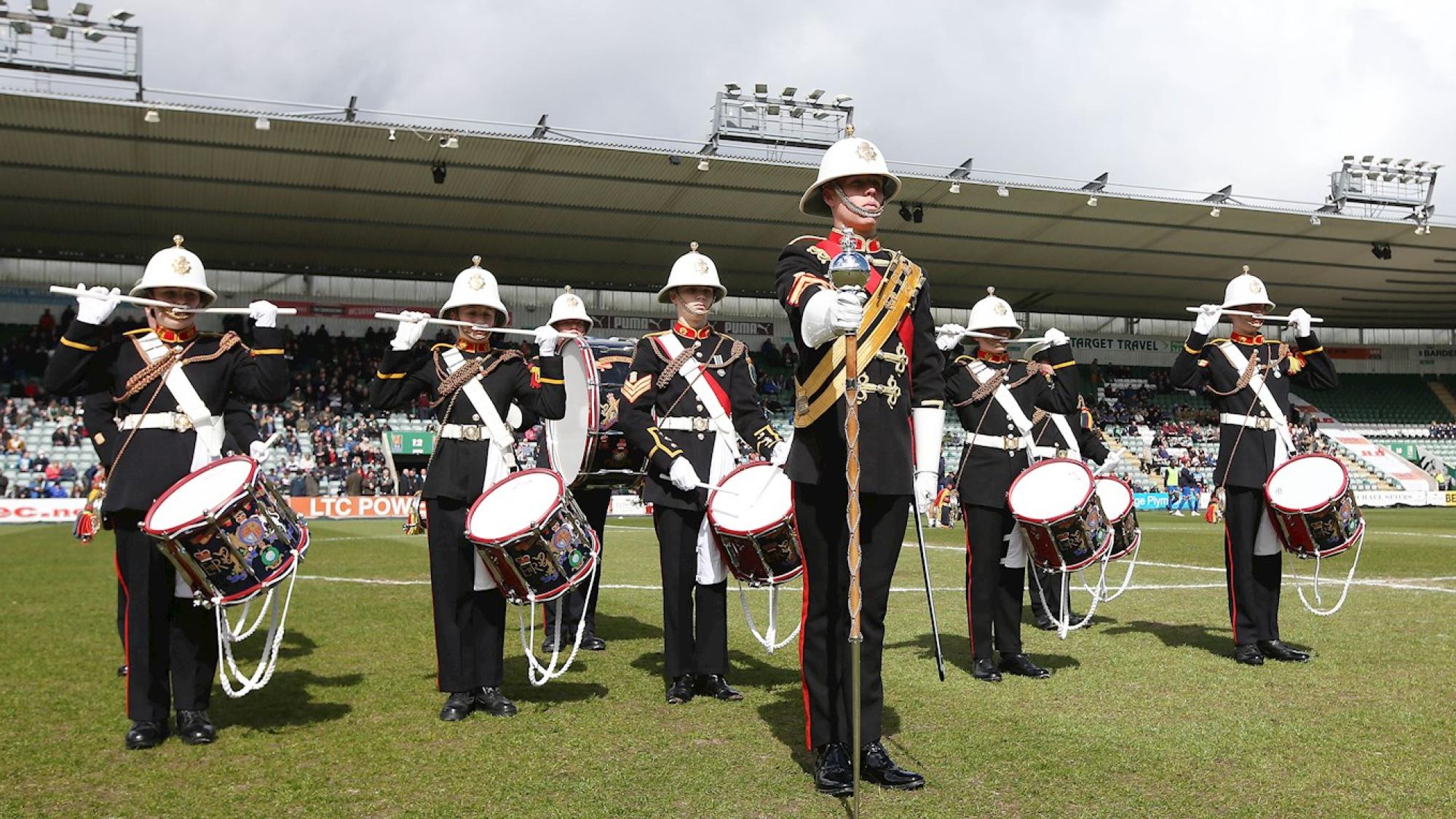 The Plymouth Band of Her Majesty’s Royal Marines will headline celebrations at our Armed Services Day fixture, sponsored by Babcock International, on Saturday, 2 April.

The musical wing of the Royal Navy will perform pre-match and at half-time, marching in from the vehicle gate located on the corner of the Devonport End and Lyndhurst Road Stand before the Greens’ Sky Bet League One crunch clash with fellow play-off hopefuls Oxford United at Home Park.

Ticket sales are tracking for a home sell-out – our fourth of the season – and there are plenty of other activities taking place around Home Park to mark our 12th Armed Services Day fixture, which carries extra poignance, with the fixture occurring 40 years to the day from the beginning of the Falklands conflict.

In acknowledgement of the occasion, medal-wearing Falklands veterans will take a lap of honour around the Home Park pitch at half time, and we ask supporters to show their appreciation with a round of applause, as well as contributing to a bucket collection in aid of the Falklands Veterans Foundation and the South Atlantic Medal Association.

Supporting the Royal Marines Band outside Home Park in the build up to the game will be the Plymouth Pipe Band, while a number of local and national military organisations will host stands and displays around Home Park, including – 29 Commando Royal Artillery from The Royal Citadel, the Royal British Legion, the Royal Monmouthshire Squadron, event sponsors Babcock International, the Federation of Plymouth & District ex-Services Association, and the Royal Navy's Plymouth Bomb Disposal team.

Standard bearers, carrying eight different standards representing the combined services, will form a tunnel for players to emerge from onto the pitch before kick off, while the military band will play the club’s traditional walk-out anthem, Semper Fidelis, before the match ball is delivered to the officials by a Royal Navy Bomb Disposal robot and the national anthem is played.

As a club that proudly represents Plymouth and its distinguished military tradition, we are honoured to be able to pay tribute to all servicemen and women who serve to keep us safe and protect the freedoms we take for granted.

Having been unable to host the event last season as a result of Covid-19 restrictions, our 12th Armed Services Day will be an opportunity to celebrate the efforts of armed services personnel, as well as their families.

Argyle Club Secretary Zac Newton, a Royal Navy veteran who used to help organise Armed Services Day in his role at HMS Drake, said: “We are excited to be able to bring Armed Services Day back to Home Park next weekend, and there could hardly be a more appropriate fixture for it.

“The match against Oxford being 40 years to the day since the Falklands conflict is significant, but so is the idea that we will likely be playing in front of a full house – presenting a tremendous opportunity for the people of our city to express our thanks to servicepeople and their families.

“It will be a wonderful occasion, and we thank all of the military organisations that are contributing to the day.”

Tickets are selling very quickly, so we advise supporters to purchase promptly or risk missing out.

Head to argyletickets.com, call 01752 907700, or head to the Home Park Ticket Office during opening hours to secure your seats.