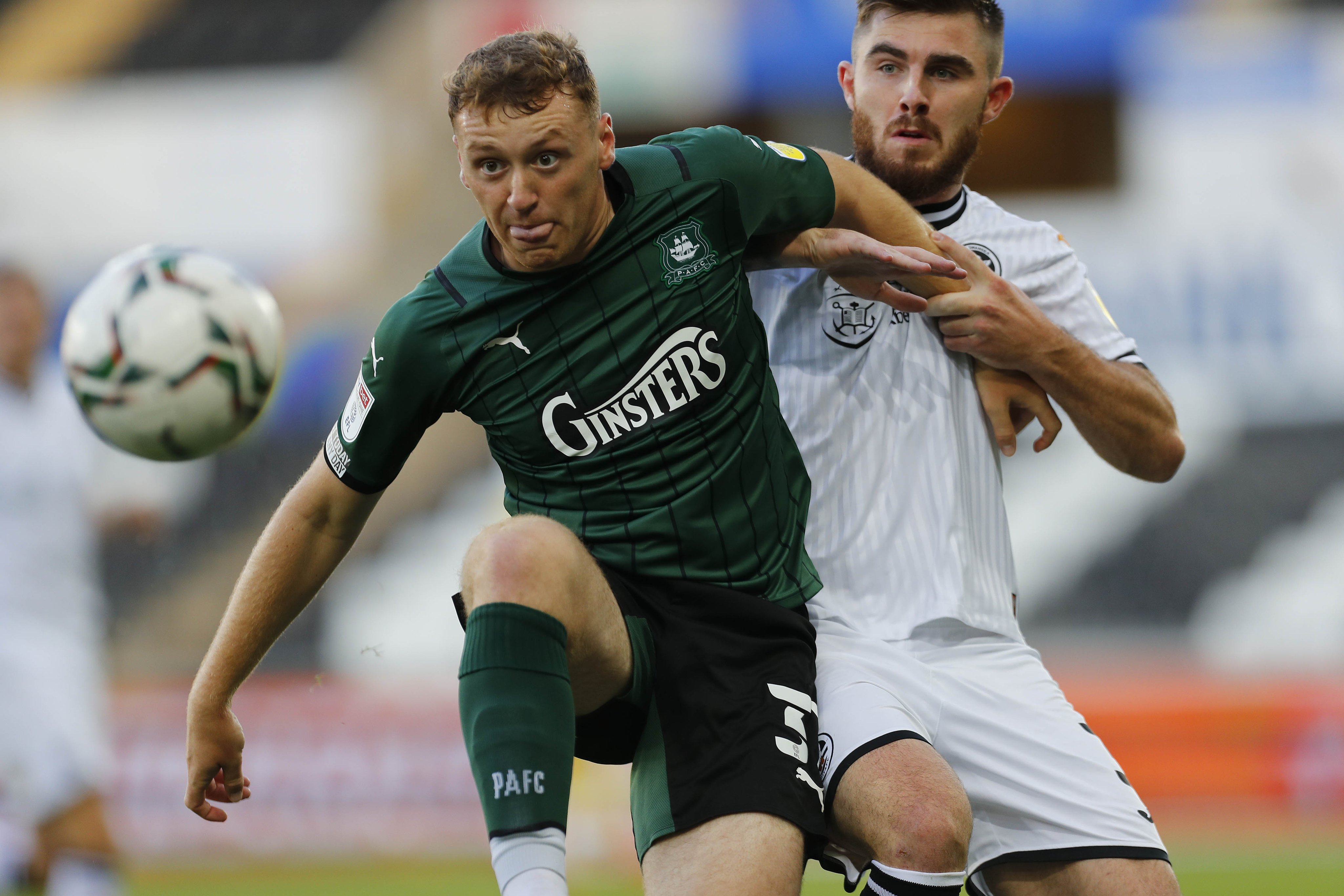 Argyle have had an important relationship with the county of Cornwall throughout their history, with several players coming across the Tamar to represent the Pilgrims down the years. With Saint Piran's Day - the national day of Cornwall - occurring on Saturday, 5 March, Cornwall Sports Media's Matt Friday has delved into the archives to select 12 Cornishmen to represent the Greens.

Born in Hayle, John Gilbert Cock began his professional career with Huddersfield Town in 1914, shortly before the outbreak of World War One. He served in the British Army during the war, earning the Military Medal for bravery in the field. After the war, Cock returned to Huddersfield and scored for England in a Victory International against Wales. He moved to Chelsea for a record £2,500 in 1919, scoring 47 goals in 99 games before joining Everton in 1923. After two years with the Toffees, Argyle manager Bob Jack lured him to Home Park, where he would score 72 goals in just 92 appearances - the best goals per game ratio in Argyle history. He made two appearances for England and scored 30 seconds into his debut in a British Championship game against Ireland in 1919, believed to be the third-fastest competitive England goal ever.

Looe-born Ray Bowden was snapped up by Argyle as an amateur in 1926 before turning professional the following year. An inside forward by trade, Bowden broke into the first team after scoring four goals in the final two games of the 1927/28 campaign, and went on to score 41 goals in 61 games over the next two seasons. This earned him a call-up to a Football Association select squad that toured Canada in 1931. Bowden continued to find the net at a regular rate upon his return, before legendary Arsenal manager Herbert Chapman came calling in 1933. He joined the Gunners for a club record £5,000. He went on to score 42 goals in 143 games for Arsenal, winning two First Division titles and one FA Cup along the way, and was selected for England six times during his spell at Highbury.

Tintagel-born goalkeeper Harry Cann signed for Argyle from his hometown team in 1927 and enjoyed a long and successful 12-year spell with the Pilgrims. Arriving shortly after the departure of fellow Cornishman Cock, Cann was initially an understudy to first-choice gloveman Fred Craig before establishing himself as the number one for the majority of his 12 years at the club. His final appearance for Argyle came in May 1939, aged 34, keeping a clean sheet in a 2-0 victory at home to Southampton. He joined Fulham on a free transfer at the end of the season but his career was cut short amid the onset of World War Two, with his activity for the Londoners limited to appearances in the 1939/40 War League before retiring shortly after.

Reginald Jenkins may not be a household name among Argyle fans, but the Millbrook-born inside forward is synonymous with both his hometown club and Rochdale AFC. Jenkins joined Argyle from Truro City as a semi-professional in 1957 and made the first of his 16 appearances as a Green in a 4-3 win at Swindon Town in February 1959. Jenkins was released by Argyle in 1960 and spells at Devon neighbours Exeter City and Torquay United followed before he moved to Rochdale in 1964. He stayed at Spotland for nine years, scoring 119 goals in 305 league games to become both the club’s record goalscorer and appearance maker at the time. He left the club and ended his career in 1973, and in 2004 was voted the club’s greatest-ever player by their fans. He died in 2013 aged 74, with hometown club Millbrook renaming their ground to Jenkins Park in his honour a year later.

Born in Gunnislake in 1944, Michael Trebilcock signed for Ellis Stuttard’s Pilgrims in 1962 following spells with non-league sides Tavistock and Wadebridge Town. A slow start to life at Home Park saw him play 12 times and score one goal in the winger’s first two seasons at the club, but a return of 26 goals in his next two campaigns earned him a £23,000 move to Everton in December 1965. While he only scored three goals in 11 appearances during his three years at Goodison Park, he enjoyed the crowning moment of his career when he was selected for the 1966 FA Cup final against Sheffield Wednesday. Wednesday took a 2-0 lead through Jim McCalliog and David Ford, but two goals in five minutes from Trebilcock brought Everton back on level terms, before Derek Temple sealed a 3-2 and the Toffees’ third FA Cup triumph.

Striker-turned-midfielder Richard Reynolds began his career as an apprentice at Argyle before turning professional in February 1965. The Looe-born forward made 140 appearances over six years at Home Park before joining Portsmouth in 1971.

Born in Saltash, left-back Colin Sullivan was the youngest player ever to feature for Argyle when he made his debut as a 16-year-old in 1968, a year before signing professional forms. Sullivan was a semi-regular name in the Argyle line-up for his first two seasons, but established himself as first-choice left-back, making 39 league appearances in the 1969/70 campaign at the tender age of 18. Four more seasons as an Argyle mainstay followed before a £70,000 transfer to Norwich City in June 1974. He went on to play more than 150 times for the Canaries, including their Football League Cup final defeat to Aston Villa in 1975.

Full-back John Brimacombe, born in Plymouth but raised in Saltash, was plucked from hometown team Saltash United and thrust straight into the Football League. He scored on his debut in a 2-2 draw at home to York City and made more than a century of appearances for Argyle.

Penzance-born striker Lee Phillips will be best known among Argyle supporters for becoming the club’s youngest-ever player when he made his debut in a 2-0 win at home to Gillingham in October 1996, barely a month after his 16th birthday.

Born in Torpoint, Jack Stephens joined Argyle’s Centre of Excellence aged 11, progressing through the youth and reserve teams before making his first-team bow at the age of 18 under Peter Reid, coming on as a late substitute in a 3-2 win at home to Sheffield Wednesday in September 2010. The promising defender made five more appearances in a green shirt before he was signed by Southampton for £150,000 in April 2011. After spending his first few years at St Mary's continuing his development in the Football League with various loan spells, he made his Premier League debut on January 2, 2017 as a first-half substitute in a 3-0 defeat to Everton, and has since made a further 116 appearances in the top flight at the time of writing.

Currently on the staff at Argyle in the club’s Academy, Newquay-born Jamie Lowry turned professional with Chesterfield, spending six years at Saltergate before joining Carl Fletcher’s Pilgrims in 2012. Sadly, the versatile midfielder’s time at Home Park was hampered by injury, restricting him to 11 appearances in all competitions.

Although he is the only player in this list born outside of Cornwall, having been born in the Welsh town of Aberystwyth, current Argyle star Luke Jephcott is very much a Duchy success story, having grown up in Ponsanooth in the west of the county. The former Penryn College pupil cut his formative footballing teeth in the youth teams of Wendron United and Helston Athletic before joining Argyle’s Centre of Excellence and later the Academy. Former Argyle boss Derek Adams handed an 18-year-old Jephcott his debut in October 2018, making him the first player born in the 21st century to play for Argyle. A successful loan spell at Southern League side Truro City at the start of the 2019/20 season earned him a recall to Ryan Lowe’s side in January 2020, with the Argyle Academy product scoring seven goals in 14 appearances as the Pilgrims secured an instant return to League One, before continuing that form the following year with 18 goals in 36 games. This earned him a call-up to the Wales under-21s squad in November 2020, with the Welsh-born forward scoring once in four international appearances.

Thanks to Greens on Screen for providing much of the information in this article.