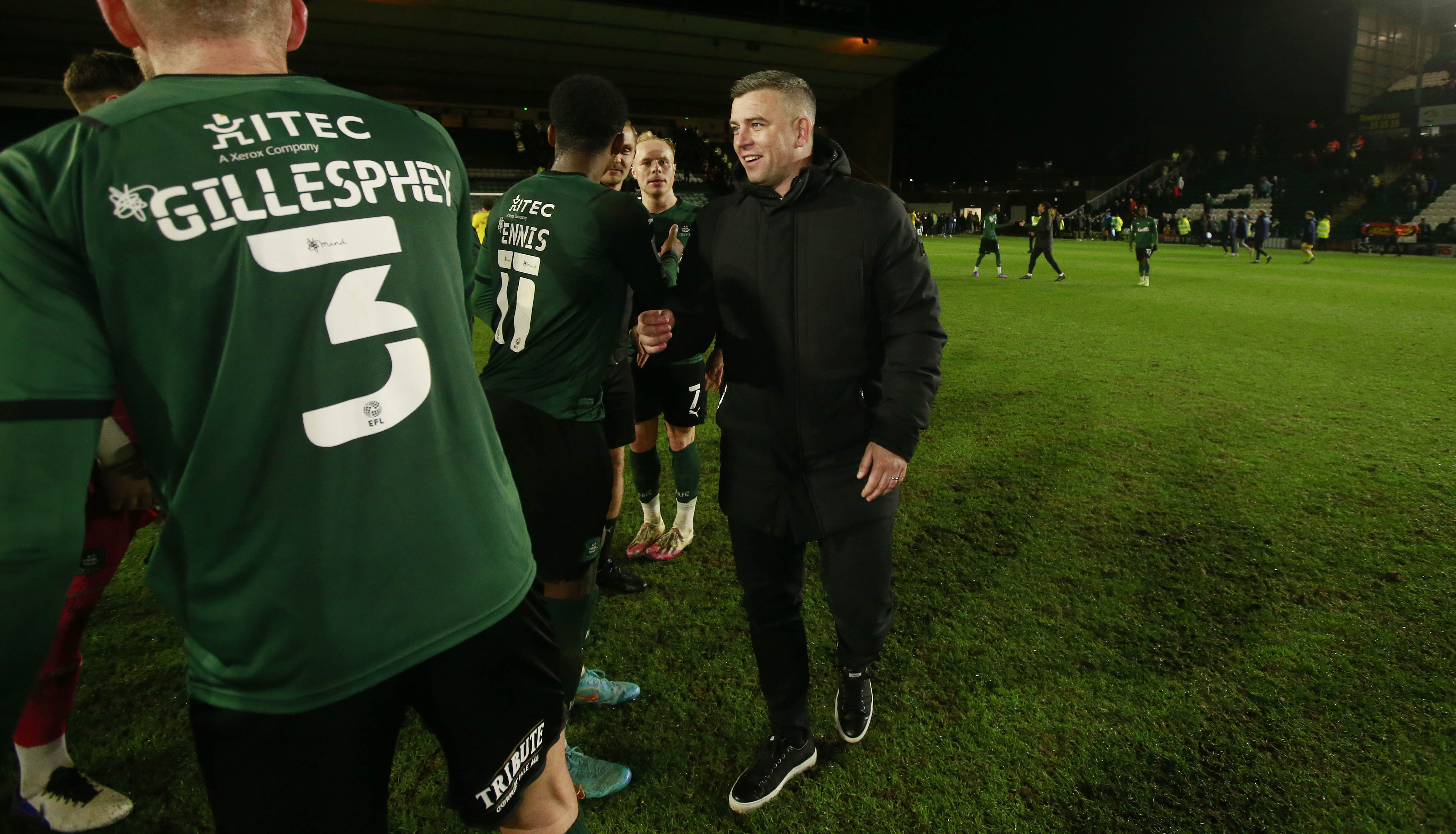 Steven happy with back to back wins

For the second time in a week, Argyle secured a 2-0 win to push themselves back into the play-off positions in Sky Bet League One.

Manager, Steven Schumacher, reflected on the performance by his team on Tuesday night, against AFC Wimbledon.

“Really pleased with the win,” Steven said, “it was a tough game and to get another 2-0 win at home is what we look for.

“We knew these two games were going to be difficult, against Morecambe and Wimbledon, two teams who are down in the league. I thought over the two games the lads have done really well. We deserve the six points.

“I thought Wimbledon were brilliant for 20 minutes, they had some really good movement.

“They’ve got good forward players, when we played them earlier on in the season they were in good form and we remember them from that, and today was no different.

“I think once we grew into the game and we settled down a little bit and started passing the ball, we looked okay.

“The second half I thought was really good, proper professional performance, a great goal to get the second one, possibly could’ve had one or two more as well.

“Teams like Morecambe and AFC Wimbledon, they’re fighting for their lives, they’re not going to come here and make it easy.

“I thought it was a slightly better performance than Saturday, a better atmosphere from everyone, and I’m just made up with the three points.”

Danny Mayor was one of the stand out performers on Tuesday night with a sublime assist for the first goal of the evening, and received praise from his manager, along with the rest of his teammates.

“It was ‘through the eye of the needle’ stuff,” Steven said, talking about Danny’s assist, “and that’s what Danny can do. He sees things that other players sometimes don’t see.

“It’s a lovely bit of skill, and a great pass, and then a real composed finish from Ryan.

“I’m made up for him and glad he got another goal to keep his little run going.

“Everyone is pulling together in the same direction, and it’s a good feel. We have two massive games to look forward to now as well.”

On the night of Mike Cooper’s 100th appearance for the Greens, the defence performance excelled.

Steven said, “The whole unit, the back three, goalkeeper and Jordan [Houghton], all work so hard, the wingbacks had to put a shift in, and that’s what you’ve got to build any successful team around, build it on clean sheets.

“Mike had a couple of saves to make and his passing was outstanding, he’s maturing and improving every single week and I’m made up he got a clean sheet on his landmark appearance.”

The Greens now turn their attention to Bolton Wanderers on Saturday night.