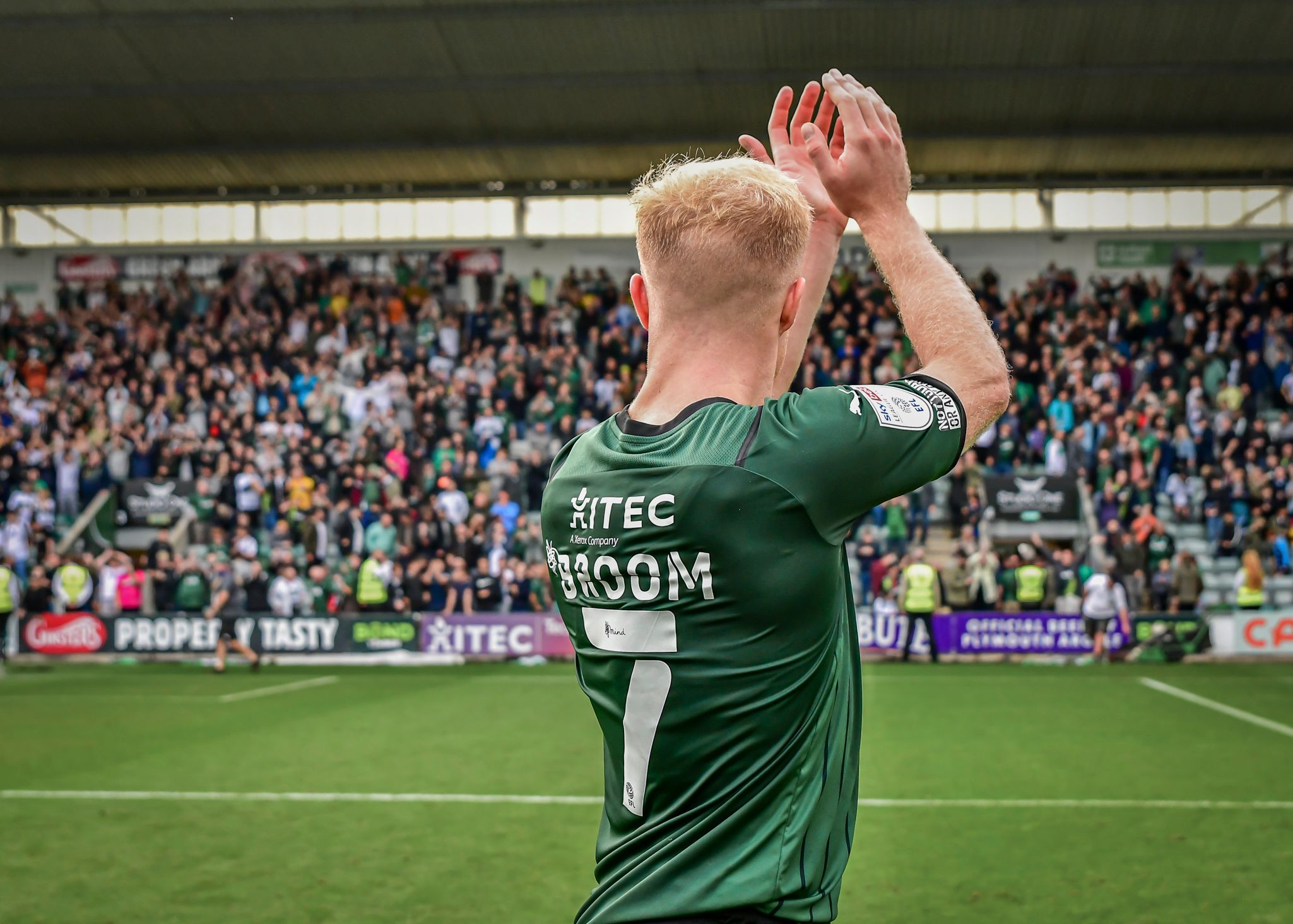 Steven Schumacher has praised all four of Argyle’s loan signings this season and admitted he would ‘love to work with them all again.’

Ryan Broom, Jordon Garrick, Steven Sessegnon and Romoney Crichlow all played a part in the Greens’ incredible season and were integral parts of the first team squad.

It has been spoken about regularly throughout the campaign, that one of the main reasons for Argyle’s success was their comradery and team spirit, and Steven was delighted with the way the loan signings bought into that.

He said, “They’ve all done brilliantly and I have thanked them all for their efforts.

“It can sometimes be hard being a loan player, will you fit into the squad? But all four of them were fantastic lads, they all fitted in§ and loved being down here.

“I would work with all of them again.”

Ryan Broom and Jordon Garrick joined the Pilgrims in the summer, arriving on loan from Peterborough United and Swansea City respectively.

Broom in particular made an instant impact.

Having made his debut in the season opener at Rotherham United, he more than filled in for the injured Danny Mayor.

He started the first 14 matches of the season, excelling in that midfield role alongside Jordan Houghton and Panutche Camara.

In that time, Argyle remained unbeaten in Sky Bet League One, with Broom scoring two goals, at home to Burton Albion and Bolton Wanderers – who could forget that goal?

Steven was thrilled with the way he was able to impact the team, particular in the absence of one of Argyle’s most creative players.

He said, ‘Ryan Broom was one of our outstanding players in the first part of the season.

“He then found it hard once Danny and Pan were playing so well but was never a day’s trouble.

“I loved him and loved his family.”

As for Garrick, it took a little bit longer for him to establish himself, but he soon won the hearts of the Green Army.

Originally played as both a wing back and striker, his pace and goalscoring ability saw him used exclusively up top, grabbing his first goal at Oxford United in a 3-1 win.

Steven said, “I can’t speak highly enough of him to be honest.

“His attitude was different class, and I would love to work with him again.”

Jordon went on to play 50 games in total scoring 7 goals, including a brace at Home Park in the Emirates FA Cup first round replay against Sheffield Wednesday.

Jordon and Ryan were joined by Crichlow and Sessegnon in January and completed the quartet of loan signings.

Romoney came in from Huddersfield Town, having played the first half of the season in Sky Bet League Two with Swindon Town.

He made his debut at home to Lincoln City, won man of the match and although he didn’t feature much more after that, made an impact on the squad.

Steven said, “He didn’t play many games, but I know he enjoyed his experience.

“He loved the group and was a massive part of it. His attitude was brilliant.”

The other January signing was a late on, it was night-time on deadline day when Steven Sessegnon arrived at Home Park.

Having not played much football in the first half of the year, and with a slight injury, it took Steven a few weeks before he featured for the Greens.

Equally adept at left or right wing back, it wasn’t until an injury to captain Joe Edwards that Steven got a run in the team.

He took it with both hands and finished the season as one of the standout performers.

“He is a quality player and showed that every time he played,” Schumacher said.

“He managed to get in towards the end, he had to be patient but when he got up to speed, he played really well.

“They have all played a massive part this season, they’ve been incredible.”

Best of luck to Ryan, Jordon, Romoney and Steven and thank you for everything you’ve done in Green.