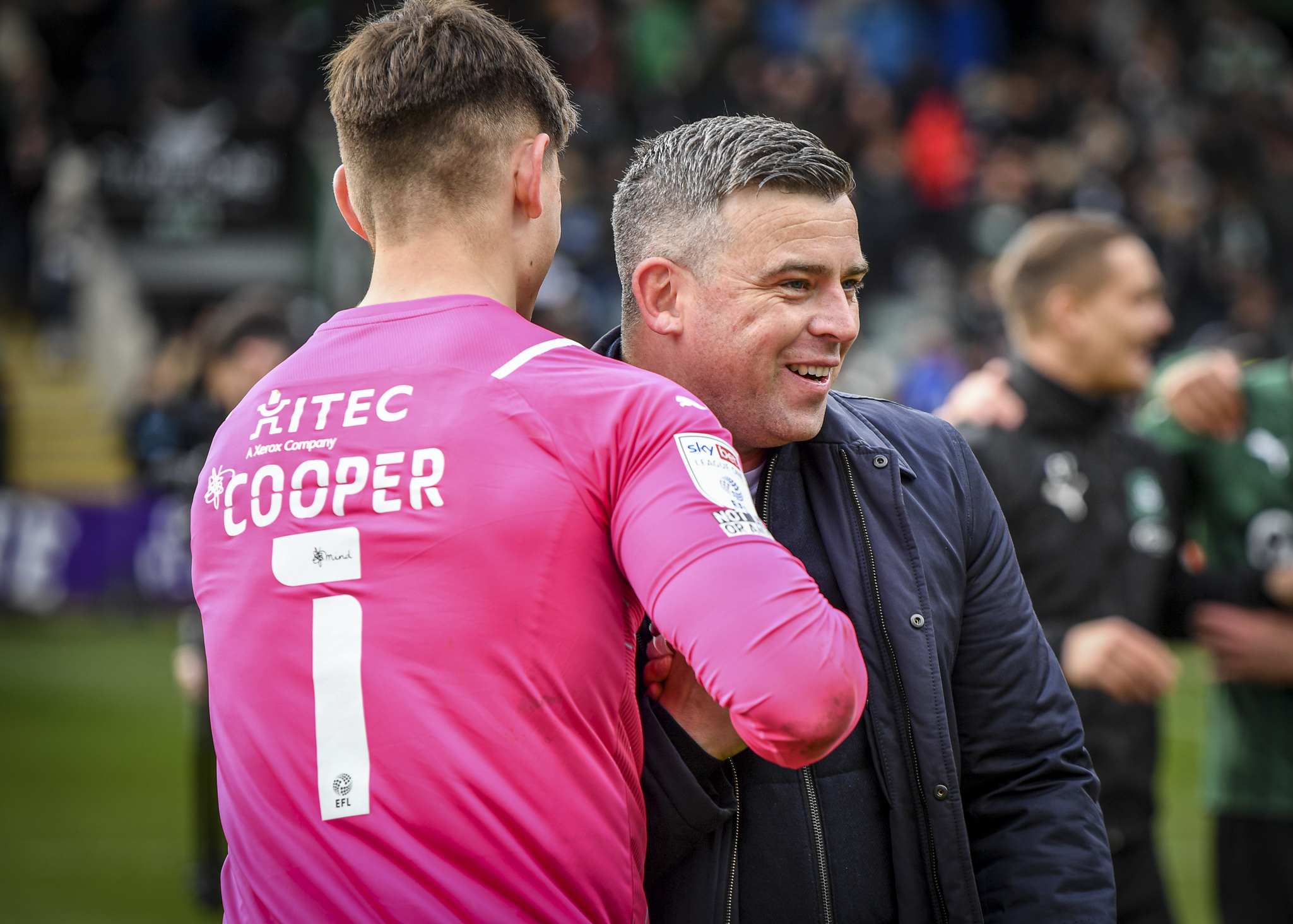 Steven proud of his team

A proud Steven Schumacher couldn’t hide his delight after Argyle made it six home wins on the bounce without conceding, thanks to a 1-0 win over Oxford United at Home Park.

“That was very nice,” he said after the game, beaming as he said it.

“I am super proud of the boys.”

Joe Edwards’ winner, ten minutes into the second half, was the difference between two sides both harbouring aspirations of promotion from Sky Bet League One this season.

His strike won it, but the performance from the whole side, front to back was the reason for Steven’s smile.

“Oxford are the leading scorers in the division, they’ve got unbelievable talent in their forward line and create some unbelievable chances.

“We needed our ‘keeper once again to make an unbelievable save in the first half.

“We had Steven Sessegnon fail a fitness test this morning, we had Alfie Lewis have a reoccurrence of his thigh injury.

“We didn’t let that faze us and it shows the character of the boys that they just get on with it.”

The victory and shutout against the league’s leading scorers was made all the more impressive due to the fact that two of the back five were making their first starts since the end of February.

Dan Scarr was back in the middle of the defence, making his first start for two months and Ryan Law also came in for his first start since the win over Crewe Alexandra and both put in flawless displays.

“We phoned Lawsy this morning to say he was going to play. Hs was ready and performed brilliantly,” Steven said.

“Dan Scarr looked great, apart from a minute at the start of the game when he stood on the ball.

“I could go through so many of them today, James Wilson, Dan Scarr, Panutche were all flawless – different class.

“Everyone is confident, we’re in a good spot, made up with the win but grounded as well because we have another game next week to focus on.”

Like with games gone by, Mike Cooper excelled and stood up when needed, making a string of breathtaking saves in the first half.

One in particular stood out, when he stuck out a leg to deny Gavin Whyte who looked certain to score.

Not even his manager knew how he stopped it, “I don’t know how he kept it out, but he did.

“I was watching the Liverpool game before the game, with Hughesy, and Alisson made a brilliant save one minute and then Liverpool scored.

“Big teams have ‘keepers that pull off big saves and Coops is just that for us.”

With games against four of the top eight still to play, points in the bag could be crucial and Steven is happy with the spot the team is in at the moment.

He said, “The games are getting ticked off and thankfully we are still picking up points, as are others.

“We’re not too far away from the sides in front of us, we have a bit of a gap to the sides below us, so we’ll just keep going.”