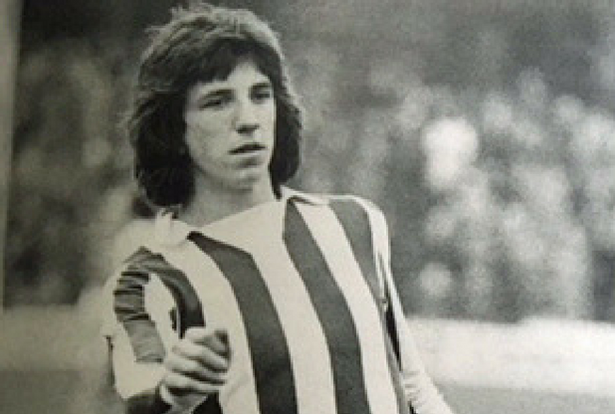 Unquestionably one of the greatest talents to represent Argyle in history, Mariner passed away over the weekend after a short battle with brain cancer.

Whether you were lucky enough to see him grace the Home Park pitch or if you’ve just heard stories of this legendary striker, you will know he is an Argyle legend.

Paul joined Argyle in the summer of 1973 as a 19-year-old kid trying to make a name for himself in the professional game. Having played in the non-league circles in his native Lancashire for Chorley, he was given a trial at Argyle and featured in a pre-season friendly in Cornwall.

In typical Mariner fashion he didn’t disappoint, scoring two goals after coming on as a second half substitute.

Also playing that day was Johnny Hore, who recalls the game vividly, “I remember being down at Penzance in a pre-season friendly. Paul came on and scored an unbelievable goal and after that game they signed him on.”

It was the sign of things to come, he went on to score 61 goals during his three year stay at Home Park, getting better and better as he got more experienced.

Johnny said, “I say this to everyone whenever I talk about Paul, in his last season with us I have never seen a player improve so much.

“All of a sudden everything came together for him. He had his strength and his heading ability but his power and pace and his ball control, it all came together.

“It was no surprise when Ipswich bought him and of course he went on to play for England.”

After three seasons where he scored 17, 21 and 16 goals in respective campaigns, it certainly wasn’t a shock that the clubs higher up the pyramid began to take notice.

Ipswich boss Bobby Robson was one of those managers who was desperate to sign the then 23-year-old and was willing to do anything to get is man, as John Peddelty can testify to.

“I was part of the deal that took Paul from Argyle to Ipswich.

“Bobby Robson said ‘we’re after a player and if you don’t go the deal is off.’ It was a lot of pressure really and I thought I better go.”

The move to Portman Road was a coming of age for Mariner, he scored 135 goals in 339 games, winning the FA Cup in 1978 and the UEFA Cup three years later.

He was becoming a superstar and soon caught the attention of the England manager.

Paul made his international debut in 1977, a year after joining Ipswich and went on to score 13 goals in 35 games for his country, including at the 1982 World Cup.

The stardom that Paul now found himself a part of was no surprise to those who saw his professional career begin, Hore knew that Argyle was just the start and that better was to come.

“He was always destined for great things, he was amazing. I know you get these stories in football from time to time. But he came from Chorley to Argyle and beyond. The rest is history really.”

Those humble beginnings and having to work hard for your success was one of Paul’s most popular qualities. He always remembered where he came from and who helped him along the way – Argyle was never far from his mind.

Having moved to America towards the end of his playing career, he ventured into coaching as was assistant manager at MLS side New England Revolution.

But the pull of Home Park was too strong and Paul re-kindled his relationship with Argyle in 2009 when he came back to manage the club, something that didn’t surprise his former teammate Hore.

“He always remembered Plymouth Argyle whatever success he went on to have, it’s where it all started for him.”

From a footballing stance Paul Mariner is a legend but also from a personal standpoint too. He was a man of the people who always had time for everyone.

Paul Hart runs the Argyle Legends club and has arranged many dinners throughout the years celebrating past Argyle achievements.

In 2019 Mariner and the rest of Tony Waiters side came back to Home Park for a special night of memories and stories and Hart knew he could count on his old friend to be there.

“Every time he’s come back to Plymouth he couldn’t do enough. He was so, so popular and was loved by everyone. He was a giant of a man who will be sorely missed.”

For people like Hart who were lucky enough to know him, Paul Mariner will never be forgotten.

“He is a fantastic man, a fantastic human being both on and off the pitch. He was just a magical man who I was proud to have known for over 40 years.” Paul Hart said. “He was like a family member to me and I’m sure for everyone who ever knew him.”

For Hore, Mariner was a teammate and a friend, someone who he could always rely on to cheer him up when he picked up the phone, “He was a great man, full of life and fun. Just a great man to have around you.

“I have great memories of Paul, not only was he great player he was a great man too. I was devastated when I found out, I still am. He was so young, so fit and strong. It’s horrible, he will be sadly missed.”

Paul will go down as a legend, one of Argyle’s greatest and rightfully so.

Thanks for everything Paul.