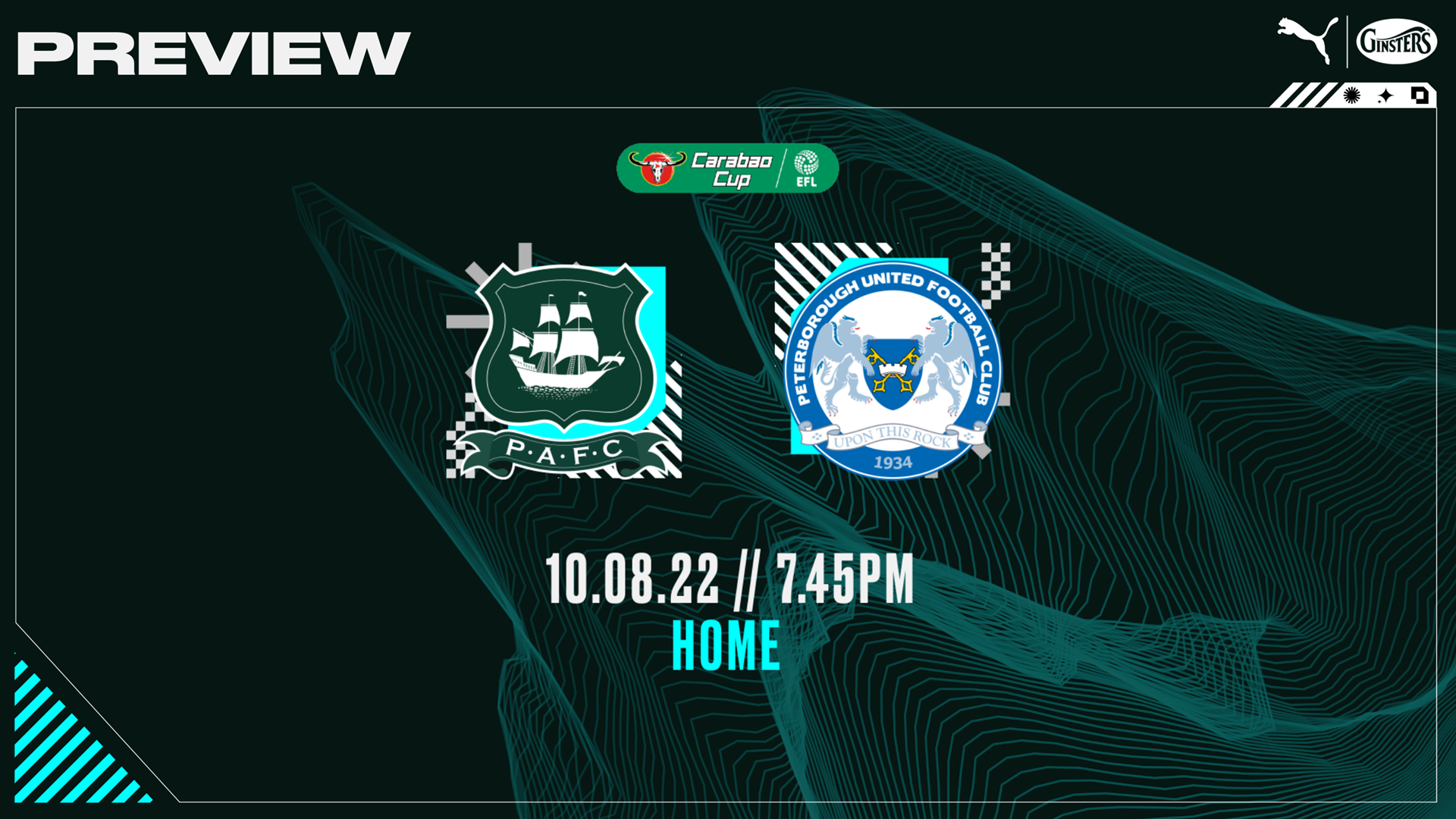 Argyle meet Peterborough United this Wednesday night at Home Park, for the first of a pair of home games against Posh.

Wednesday’s game, which kicks off at 7.45pm, is in the first round of the Carabao Cup, while Saturday’s encounter is in Sky Bet League One.

Posh are the only League One side to have won both of their games so far. They won 3-2, after falling 2-0 down, at Cheltenham Town on the opening day of the season. This was followed by a comfortable 3-0 win against Morecambe last Saturday.

Argyle and Peterborough met at the opening stage of the Carabao Cup last season, with The Pilgrims winning 4-0 though a Ryan Hardie brace followed by goals from Luke Jephcott and Panutche Camara.

Peterborough were a Sky Bet Championship side at the time, but were relegated after finishing 22nd in 2021/22.

They are managed by Grant McCann, a former Northern Ireland international midfielder. He played nearly 200 games for Peterborough in a playing career that also saw him represent Cheltenham Town, Barnsley and Scunthorpe. McCann began his managerial career at Peterborough from 2016 to 2018, and after stints in charge of Doncaster Rovers and Hull City, he returned as Posh boss in February.

Summer arrivals for Peterborough included Hector Kyprianou, a midfielder from Leyton Orient, and Ben Thompson, a former Millwall midfielder who spent the second half of last season with Gillingham. Both newcomers scored on their full United debuts in their win over Morecambe.

Goalkeeper Lucas Bergstrom is another notable arrival. The 19-year-old is on loan from Chelsea, and has been called up to Finland under-21 squads.

Notable departures include Sammie Szmodics, who played in Peterborough’s opening game before being signed by Blackburn Rovers, for whom he scored at the weekend.

Schumacher Says
“I’m glad there is another game this week, because we can put [Fleetwood] to bed, make a few changes and people can stake their claim for a place in the following game.

“We will try to get a better performance on Wednesday night in the Carabao Cup, and then there is another tough game at the weekend. It will be two hard games, and we will have to play better to get anything from them.

“We’ll make a few changes. I think it’s important that people get a chance to stake their claim. There’s a few lads who didn’t get on [at Fleetwood] who will be thinking ‘why not?’ It will be a chance to have a look at a few things. Places will be up for grabs on Saturday.”

Argyle Team News
Mickel Miller, Conor Grant, James Bolton and Panutche Camara have all missed the opening two fixtures of the season and are all expected to miss out once more. No injuries were reported emerging from Saturday’s game against Fleetwood Town. As mentioned above, Steven Schumacher has hinted at changes to the starting 11 that has begun the last two fixtures.

Tickets
Tickets remain available to purchase online at argyletickets.com. The Home Park Ticket Office will be open until kick-off for supporters wishing to purchase on the day of the fixture.

Turnstiles will open two hours before kick-off, from 5.45pm. Supporters are advised to enter through the turnstile identified on their match ticket. However, if neighbouring turnstiles have shorter queues, supporters are permitted to enter these to speed up access to the stadium.

Argyle TV
This game will be covered as an audio-only commentary for both domestic and international supporters. 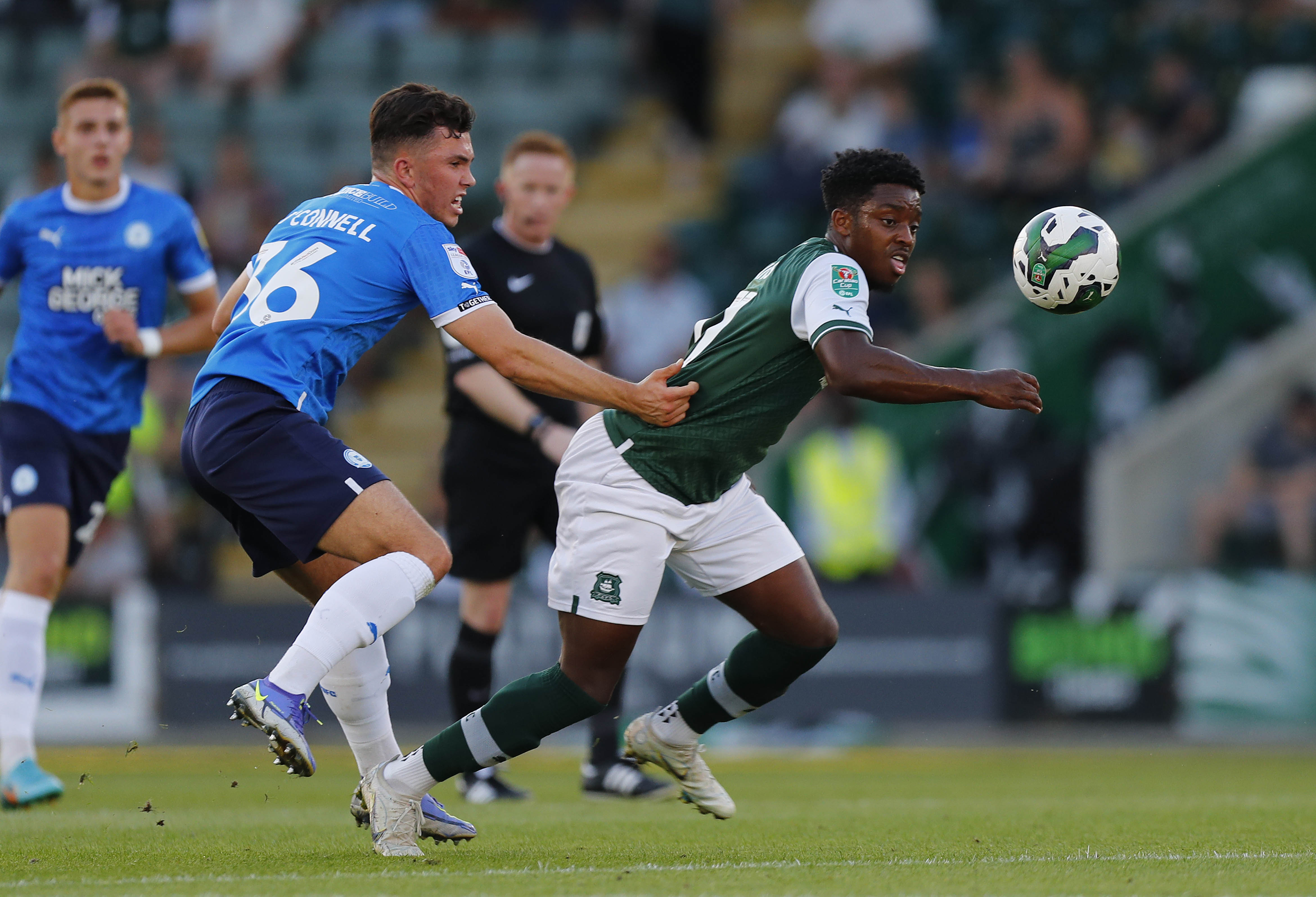 In the first of two home ties against Peterborough United in a matter of days, a much-changed Argyle side bowed out of the Carabao Cup in the first round.

Ricky-Jade Jones had given the visitors a 28th-minute lead, and the Greens were made to pay for their inability to convert significant second-half pressure when Joe Taylor rolled into an empty net on the break in stoppage time, with goalkeeper Mike Cooper committed up the field in search of a dramatic leveller.

Argyle manager Steven Schumacher rotated his side to give an opportunity to those who have been on the outskirts of the squad in the opening weeks of the season.

Among the seven changes were Wolverhampton Wanderers loanee Nigel Lonwijk, making his debut in defence alongside Brendan Galloway - himself making a competitive return after a long-term lay-off. Meanwhile, second-year scholar Jack Endacott was rewarded for a fine pre-season campaign with his competitive football debut.

A patient start gave way to the first shot on goal from either side on 17 minutes, as tireless work from Niall Ennis on the half-way line played Luke Jephcott into the left channel. He broke beyond his marker and created an opening to shoot from just inside the box, but the effort with his weaker left foot was comfortable for Posh stopper Lucas Bergstrom.

Peterborough’s first opportunity came on 25 minutes, moments before a temperature mandated drinks break, when David Ajiboye smashed a cross-shot at goal from the right corner of the penalty box, but Cooper swatted it away to safety.

The drinks break did Argyle no favours, as the visitors took the lead immediately afterwards. Joel Randall latched onto a fortuitous ricochet 25 yards out after a midfield contest, before laying the ball into Jones, who took a touch before steering the ball low into the far corner with his left foot.

On the half hour, Posh carved out another opportunity. Randall’s short corner was fed to Joe Tomlinson, whose drilled cross was tipped away from goal by Cooper, with Josh Knight unable to react fast enough to divert home at the far post.

As the half wore on, the forward trio of Morgan Whittaker, Jephcott and Ennis rotated in search of more joy, and it was Jephcott’s smart link-play that earned a route to goal, but Whittaker’s effort from eight yards was deflected behind by a Posh defender.

With the final notable act of the half, Swansea City loanee Whittaker successfully wriggled free of his marker but blazed a first-time effort over the bar after an excellent cut-back from Endacott.

Endacott was in the thick of it right after the restart, and Argyle were so very nearly level. A wonderful cross from the left picked out Ennis on the six-yard line, and the Pilgrims’ striker met the ball with a sweet header, only to be denied by a superb reaction save from Bergstrom.

Despite Argyle’s strong start to the half, they did not have it their own way, and Taylor reminded them of Posh’s threat on the break when he took the ball on his chest and attempted an acrobatic volley over his shoulder that flew wide of target from around the penalty spot.

Manager Schumacher introduced Finn Azaz for Jephcott on the hour, and the attacking midfielder very nearly equalised with his first touches of the ball. Breaking the lines in midfield, Azaz fed Ennis in the channel, and the striker protected possession before returning it on the edge of the area, where Azaz met it to smash narrowly over the crossbar at the Devonport End.

Azaz’ introduction breathed new life into Argyle, and the midfielder took aim once again from a short corner routine, but this time Bergstrom clawed the angled effort wide. Before his time on the pitch had amounted to 10 minutes, Azaz also saw a third effort rise over the crossbar from range, as well as collecting a yellow card for frustration at a refereeing decision.

If the manager’s message to Azaz had been to impact the contest – he was certainly doing that, and he was joined by fellow substitutes Ryan Hardie and Danny Mayor with 20 minutes to go as Argyle continued to hunt down an equaliser.

The fresh changes saw Argyle revert back to the 3-5-2 shape synonymous with the past few seasons at Home Park, with Whittaker partnering Hardie up top. The chances continued to come and go, with Azaz firing over again after some twists and turns in the box, before Whittaker got similarly underneath a first-time effort from 18 yards.

In a rare second-half foray into Argyle territory, Posh had the opportunity to put the tie to bed, but Cooper made a brave save down at the feet of Jones as the visiting striker raced clear.

Despite dominating proceedings for the remainder of the game, Argyle could not convert one of their myriad of half chances. In stoppage time with Cooper up to join a corner, Taylor added gloss to the scoreline, rolling into an empty net on the break.