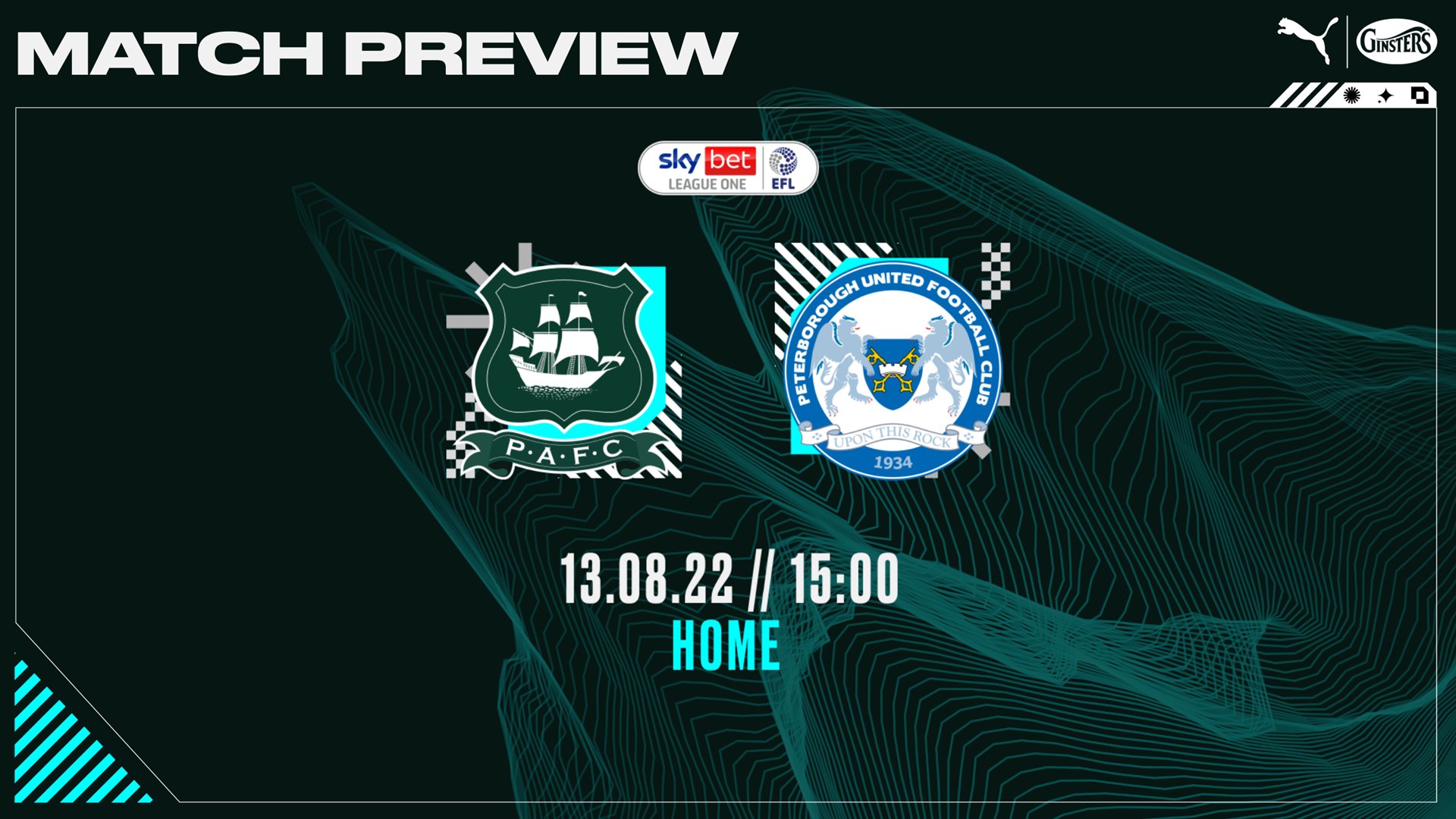 Argyle meet Peterborough United on Saturday afternoon at 3pm at Home Park, after meeting the same club on Wednesday night in the Carabao Cup.

This time, the teams meet in Sky Bet League One, a division that Peterborough are top of following two wins out of two thus far.

They followed up that good form by knocking Argyle out of the Carabao Cup in midweek. Posh probably deserved their half-time lead, given to them via a goal from Ricky-Jade Jones, but Argyle fought back strongly in the second period. However, The Pilgrims failed to convert their pressure into goals, and in the end, Peterborough sealed their victory with an injury time coup de grace courtesy of Joe Taylor.

In the league, Peterborough began by winning 3-2, after falling 2-0 down, at Cheltenham Town on the opening day of the season. This was followed by a comfortable 3-0 win against Morecambe last Saturday.

Posh made eight changes from the side that started against Morecambe for the first game of the week against Argyle. They will have plenty of options when it comes to the league renewal this weekend.

Peterborough were relegated from the Sky Bet Championship after finishing 22nd in 2021/22.

They are managed by Grant McCann, a former Northern Ireland international midfielder. He played nearly 200 games for Peterborough in a playing career that also saw him represent Cheltenham Town, Barnsley and Scunthorpe. McCann began his managerial career at Peterborough from 2016 to 2018, and after stints in charge of Doncaster Rovers and Hull City, he returned as Posh boss in February.

Summer arrivals for Peterborough included Hector Kyprianou, a midfielder from Leyton Orient, and Ben Thompson, a former Millwall midfielder who spent the second half of last season with Gillingham. Both newcomers scored on their full United debuts in their win over Morecambe.

Goalkeeper Lucas Bergstrom is another notable arrival. The 19-year-old is on loan from Chelsea, and has been called up to Finland under-21 squads.

Departures include Sammie Szmodics, who played in Peterborough’s opening game before being signed by Blackburn Rovers, for whom he scored at the weekend.

Schumacher Says
“It was a major positive to get Brendan Galloway an hour of competitive football on Wednesday night. Nigel [Lonwijk] did brilliantly at centre back, and gives a selection headache, we know he is capable.

“It was important that we gave people an opportunity to stake a claim for a place in the team. There were a few good performances, and one or two who would have liked to have done slightly better. It’s what we have a squad for. We used our squad on Wednesday night, and we’ll use it again Saturday.”

Argyle Team News
Mickel Miller, Conor Grant, James Bolton and Panutche Camara are expected to miss out with injuries that have prevented them from playing this season so far. Bali Mumba was on the bench for Wednesday’s Carabao Cup tie against Posh, because of a dead leg.

Brendan Galloway played an hour in that game, his first competitive action since November. It remains to be seen whether he is fit enough to stake a claim for a place in the side this Saturday.

Steven Schumacher admitted that one or two players who appeared against Peterborough, but have not featured from the start in league games, have given him food for thought as far as team selection goes.

Tickets
Tickets remain available to purchase online at argyletickets.com. The Home Park Ticket Office will be open until kick-off for supporters wishing to purchase on the day of the fixture.

Turnstiles will open two hours before kick-off, from 3pm. Supporters are advised to enter through the turnstile identified on their match ticket. However, if neighbouring turnstiles have shorter queues, supporters are permitted to enter these to speed up access to the stadium.

Pre-Match
Before the game, we will observe a one-minute silence to commemorate the first anniversary of the Keyham tragedy. 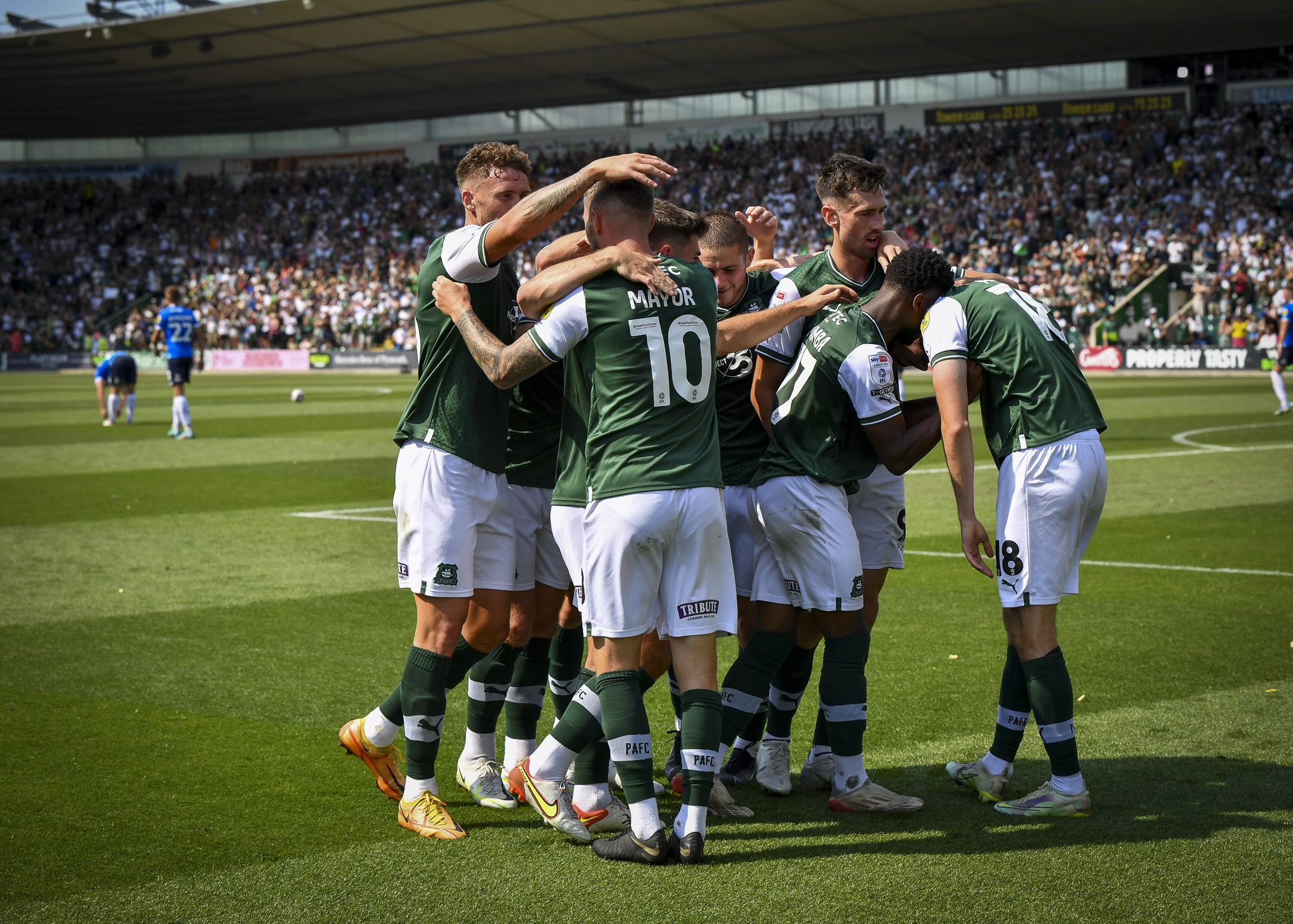 Argyle defied extraordinary heat to produce an outstanding display, full of energy, entertainment and quality all over the park.

The reward was a terrific 2-0 victory over a strong Peterborough outfit, Finn Azaz opening the scoring after a fabulous move on the half-hour and Ryan Hardie confirmed the win with his second successful penalty of the season.

A scorching Home Park began the afternoon in sombre fashion, paying tribute to those who lost their lives in the Keyham tragedy one year ago.

Jordan Houghton returned to the Argyle midfield from last weekend’s last-gasp defeat at Fleetwood, with Matt Butcher on the bench, and the Pilgrims were seeking swift revenge over Posh after a much-changed home side lost 2-0 to the same opposition in the midweek Carabao Cup.

Peterborough also opened their Sky Bet League One campaign with two wins and astute covering from James Wilson ensured Jack Marriott was unable to continue that momentum for the visitors.

Great play down the left by Azaz ended with a pass into the box for Hardie, who almost wriggled free for a shot on goal before Macaulay Gillesphey cleared another dangerous thrust from Marriott.

Hardie managed to spring the offside trap on 17 minutes but credit to Lucas Bergstrom for racing off his line to narrow the angle and repel the attempted lob. Argyle recycled the attack for a low Joe Edwards cross cleared at the near post.

A clever move down the left gave Danny Mayor room for a right-footed drive across goal. The ball ricocheted to Bali Mumba, who saw his first-time effort saved by the legs of Bergstrom.

Leading up to the drinks break, Argyle continued to dominate, as Joe Ward recovered to make a last-ditch block on Mayor in the left channel.

The goal was coming and what a goal it was.

A sublime move down the right involving Edwards, Hardie and Mayor sliced through the Posh defence. The ball was cut back to Azaz just inside the box and he steered a perfect finish into the near-post bottom corner.

Prompted by the midfield assurance of Houghton and Adam Randell, Argyle were in complete control and playing with admirable intensity in such stifling conditions.

Peterborough responded with their first serious chance of the half, Marriott quickly shifting the ball to his right for a low drive expertly saved by Mike Cooper down to his left.

The relentless heat and a freshly-watered surface greeted the two sides for the second half and Peterborough manager Grant McCann was clearly not happy at the break, as he made four half-time substitutions.

The immediate impact was Peterborough playing far higher up the pitch and Edwards took advantage with a delightful counter down the right, cutting the ball back for a Mayor shot beaten away by the fists of Bergstrom.

Argyle’s first change arrived on the hour, Niall Ennis replacing Mayor, but the Greens were being forced into more defensive work, particularly in dealing with the lively runs of substitute Ricky-Jade Jones on the left.

Joel Randell, another Posh replacement and a former Exeter man, danced across the edge of the box for a rising shot that was thankfully aimed straight at Cooper.

The Pilgrims sorted the problem with a lovely trick from the impressive Mumba and Frankie Kent fell for it, tripping his man just inside the box. Hardie stepped forward and calmly rifled the spot-kick down the middle.

Butcher for Randell was the next Argyle switch in the engine room and he soon shifted the ball wide to Edwards for a cross nodded wide by Hardie. The energy levels remained impressively high, as Hardie chased another channel-ball for a reverse pass to Butcher, who was unable to steer his effort wide of Bergstrom.

Hardie and Mumba were given a well-earned rest for the final ten minutes, Morgan Whittaker and Nigel Lonwijk the replacements. The reshuffled Pilgrims calmly negotiated the closing stages for three richly-deserved points.