Just three days after a superb 2-0 win over Peterborough United, Argyle are quickly back in Sky Bet League One action on Tuesday night, against Charlton Athletic.

The Pilgrims travel to The Valley having won two of their opening three league fixtures, sitting two points and nine places above their hosts in the admittedly fledgling league table.

Charlton finished 13th last season, and switched managers in the summer, replacing Johnnie Jackson with Ben Garner. Garner, who had a short spell as Bristol Rovers boss, took Swindon Town to a League Two play-off spot in his first season with The Robins, and has had a mixed start to his Addicks tenure.

Charlton began with a trip to Accrington Stanley on the opening day of the season, and the fixture produced plenty of drama. Charlton led through a Scott Fraser goal in the first half, but approached the game’s final stages at 1-1 after a Stanley equaliser with 20 minutes to go.

Charlton thought they had won the game when 18-year-old Miles Leaburn, son of former Addicks forward Carl, scored his first senior goal four minutes into injury time, only for Accrington to go straight up the other end and equalise for a second time.

Athletic won their only home game so far, being Derby County 1-0 thanks to a Corey Blackett-Taylor goal, but lost in Sheffield by the same margin last weekend when former Argyle loanee Tyreeq Bakinson scored a winner for Wednesday.

In between the league fixtures, Charlton advanced to the second round of the Carabao Cup. They beat Queens Park Rangers on penalties following a 1-1 draw in which Aaron Henry, another teenager getting his first Charlton goal, scored a late leveller.

Charlton have retained Jayden Stockley, a centre-forward who scored 20 times last season, and whose previous strong goalscoring record for Exeter City earned him a £750k move to Preston North End in 2019.

Also in the Addicks squad is Steven Sessegnon, who played 10 times for Argyle in a loan spell from Fulham last season, and has started all three league games for Charlton so far.

Three players have followed Garner from Swindon to The Valley – goalkeeper Jojo Wollacott, midfielder Jack Payne and defender Mandela Egbo – while Eoghan O’Connell and Conor McGrandles have come in from Rochdale and Lincoln City respectively.

Schumacher Says
“Charlton have got loads of good movement in their shape, and how they rotate. They’ve got really good players. We looked at Charlton’s squad last season, and said they had one of the strongest squads in League One. They just didn’t get going for whatever reason.

“They’ve still got the majority of that squad, and they’ve recruited well, added some better players. They are a really good side, have played some nice football in their first few games, and were unlucky on Saturday. It’s going to be a tough one.”

Argyle Team News
Mickel Miller, Conor Grant, James Bolton and Panutche Camara are expected to miss out with injuries that have prevented them from playing this season so far.

Otherwise, Steven Schumacher reports no further issues with anyone in the squad.

Tickets
Tickets can be purchased on the day of the game, at The Valley.

Argyle TV
If you cannot make the game, then it is available to watch on Argyle TV worldwide for just £10.

Click here to see what is available in your region. 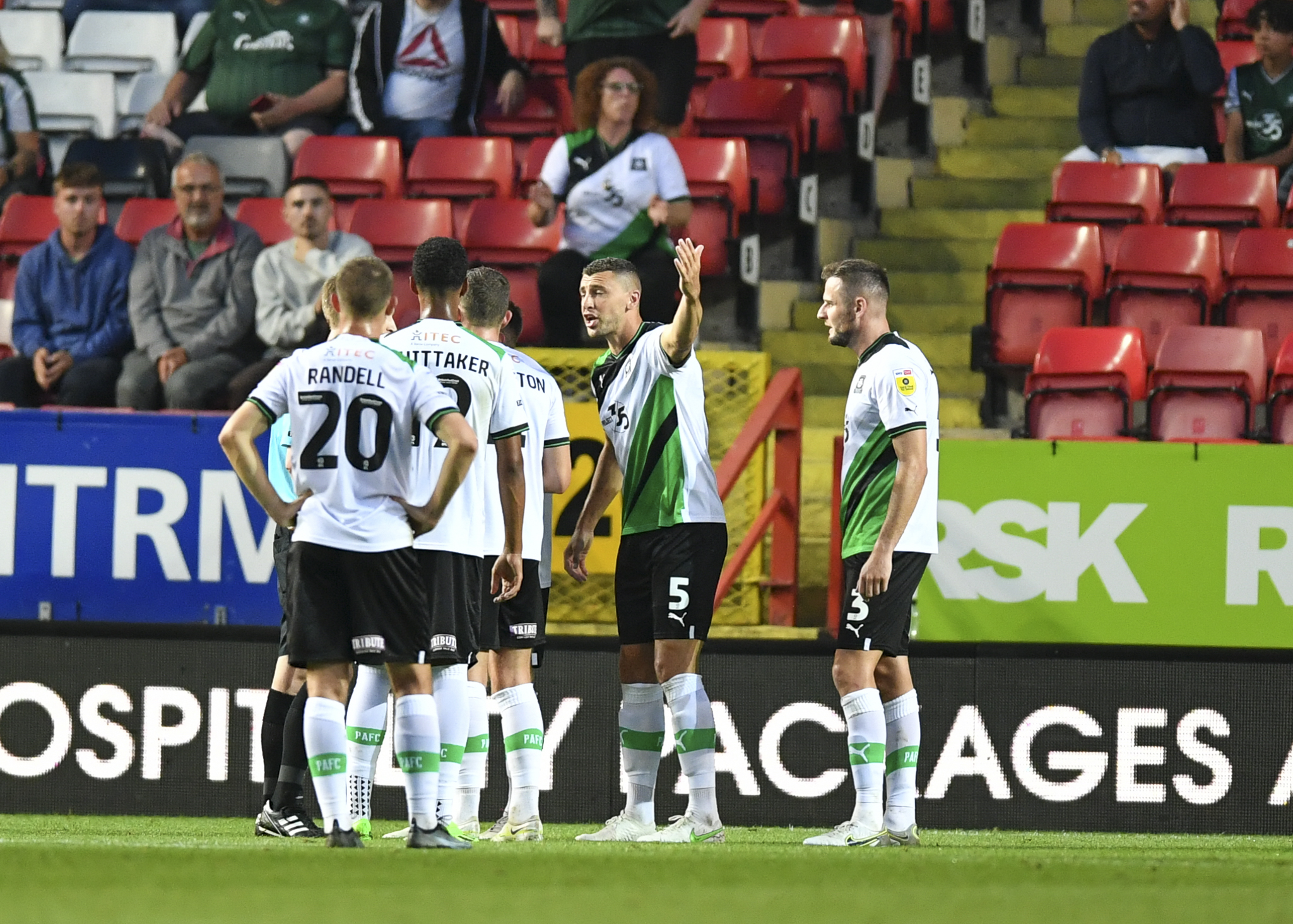 Argyle’s first trip to the capital this season proved to be a night to forget, as the ten-man Greens went down to a 5-1 defeat.

Debutant Jeserun Rak-Sakyo scored early for the hosts, the task got harder when Jayden Stockley added a penalty four minutes before the break, James Wilson dismissed for a handball in the process, and it became impossible when Sean Clare found the top corner on the half-time whistle.

Morgan Whittaker provided some cheer with a super solo effort but the Addicks delivered late pain with strikes from Charlie Kirk and Miles Leaburn.

Argyle manager Steven Schumacher made one change from the weekend win over Peterborough, handing Whittaker his first league start for the Greens, with Danny Mayor dropping to the bench.

The Addicks lost 1-0 at Sheffield Wednesday on Saturday, former Pilgrim loanee Tyreeq Bakinson notching for the Owls, and they tasted some Pilgrim penetration inside the first minute, Finn Azaz firing inches over after good approach work from Ryan Hardie.

Charlton responded with the opening goal on 11 minutes. Stockley latched on to a floating delivery and headed back across goal, saved well by Mike Cooper, but Rak-Sakyi was in the right place for a debut goal on the rebound.

Buoyed by the goal, Charlton conjured a lovely move that released Kirk on the left for an effort curled wide of the near post.

The opening half-hour was a struggle for Argyle to find their rhythm but the positive side was a quashing of Charlton’s momentum, and the pattern changed with a skidding strike from Adam Randell, after bright work by Bali Mumba, forcing Jojo Wollacott into a full-stretched save low to his right.

Stockley replied with a header straight into the arms of Cooper from a good position and a dazzling run from Rak-Sakyi opened the Argyle defence but, thankfully, his final shot was lifted too high.

A sharp move down the right reminded the hosts of the Argyle threat, Joe Edwards lofting a pass into the run of Whittaker and his attempt from a tight angle was palmed wide by Wollacott.

Argyle’s evening took a massive downturn on 40 minutes, when a deep cross picked out Stockley at the far post for a volley. A rogue hand from James Wilson led to the inevitable penalty and a red card for the Pilgrim defender. Stockley doubled the pain with a confident penalty into the bottom right corner.

There was, however, no Pilgrim culpability in the third, Clare rifling a brilliant 25-yard strike into the top corner, and Argyle had a massive second-half mountain to climb.

Schumacher turned to his bench at the interval, introducing Matt Butcher, Brendan Galloway and Niall Ennis for Randell, Mumba and Hardie. Luke Jephcott was the next Pilgrim switch on 55 minutes but, in truth, it was an onerous task for the Greens on a tough night in London.

The Addicks also made a change, Conor McGrandles replacing Clare and he quickly forcing a decent near-post block from the legs of Cooper.

Understandably, there was a general sense of acceptance from both team in the second period, Argyle remaining compact and preparing for battles ahead, while Charlton were clearly happy with their lot.

Ennis tried to change that dynamic with a bright run and cross from the left to Jephcott at the far post but his header was comfortable for Wollacott.

The marvellous Green Army were given the lift they deserved 20 minutes from time, Whittaker brilliantly weaving his way through the home defence and firing a tremendous low finish into the bottom corner from 20 yards.

Jack Payne fizzed a low cross for Kirk to hit the side-netting as Charlton sought to restore their control of the evening, and they achieved that moments later, Kirk finding his range for a steered shot from the left into the bottom corner.

The Addicks found time for a painful fifth, Leaburn latching on to a loose ball for a tidy finish into the far corner and Argyle thoughts quickly turn to Forest Green on Saturday.