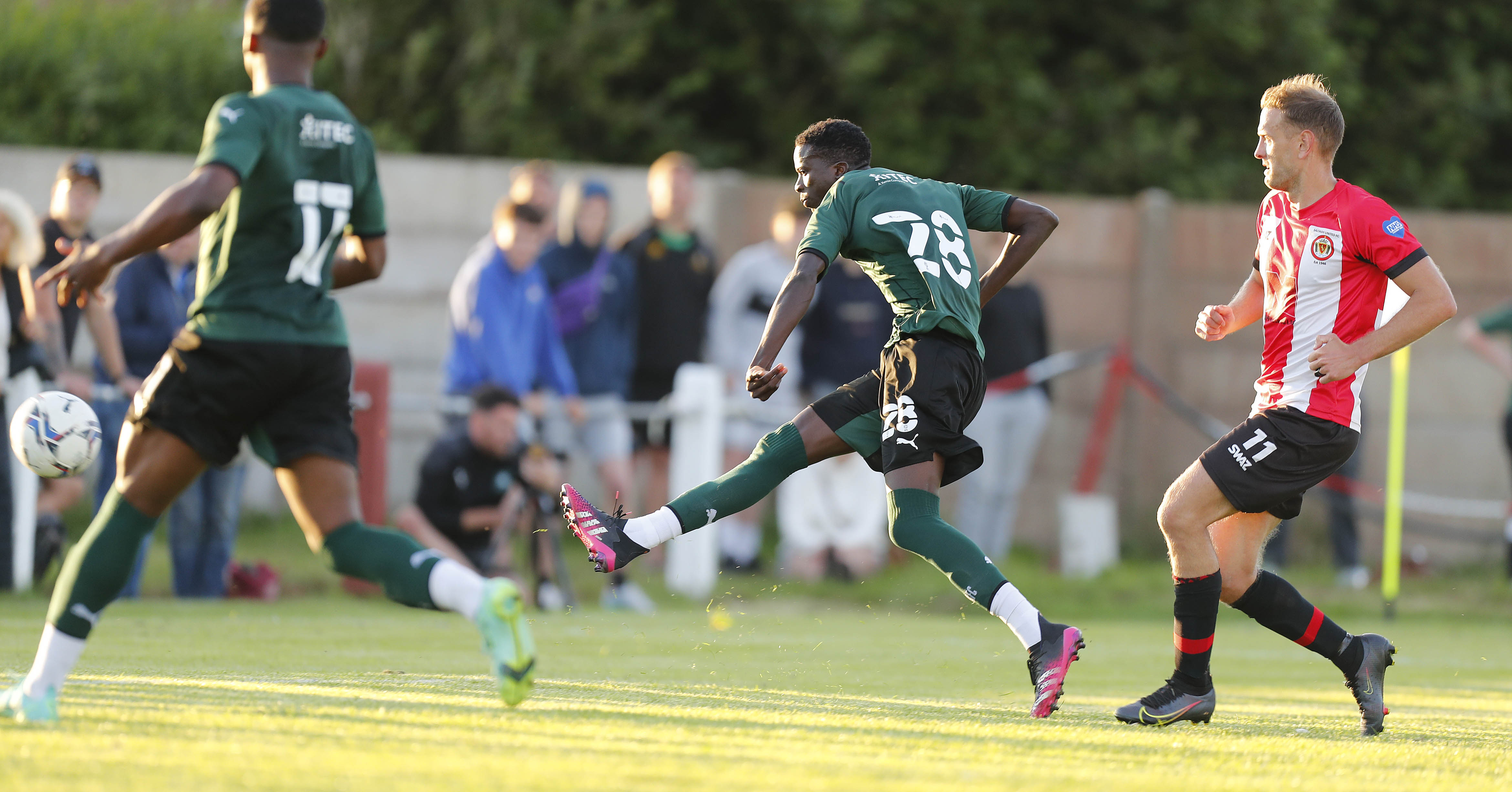 Argyle stepped up their pre-season preparations with a 7-0 victory over Saltash United in front of 600 spectators at Kimberley Stadium on Wednesday evening.

The Greens led 2-0 at half time courtesy of Niall Ennis and Conor Grant, before a flurry of second half strikes from Panutche Camara, Ennis, and late contributions from substitutes Ryan Hardie (2) and Rhys Shirley added gloss to the scoreline.

Argyle manager Ryan Lowe named a strong side for the trip across the Tamar, with Ennis, defender James Wilson and goalkeeper Mike Cooper making their first appearances of pre-season campaign. Meanwhile, Macaulay Gillesphey and Adam Randell took their positions on the bench after an extended off-season due to late-finishing 20/21 campaigns with Brisbane Roar and Torquay United, respectively.

Argyle started well, with captain Joe Edwards hooking a ball across goal for Luke Jephcott in the second minute, but the Welsh under-21 striker did not connect with his volley as well as he would have liked, and it skidded narrowly wide of goalkeeper Ryan Rickard’s right-hand post.

Credit to the Pilgrims’ non-league opponents, the Ashes defended stoutly in the opening exchanges, and it took nearly half an hour for the Greens to prise open the door. Once they got their noses in front, Argyle’s ability to run through the lines would prove too much for the hosts thereafter.

Jordan Houghton, playing that crucial pivot role in midfield, slid an excellent low pass to wing-back Conor Grant on the edge of the Saltash area. Taking a touch with his trusty left foot, Grant looked up, picked out Ennis’ darting run to the back post, and the striker did the rest - heading down and into the net.

Having laid on the opener, Grant would produce a moment of magic to score the second. Having received the ball on the edge of the area, the Everton Academy graduate took a touch with his left foot to evade his marker, another to set himself for a shot, before scoring with his third, swiping a right-footed volley towards the far corner. Rickard got some glove on it, but not enough to stop it from hitting the net.

Work done, Grant was substituted at the half-time interval, along with Jephcott, to be replaced by Hardie and Gillesphey – a debut at centre-back which saw trialist Brendan Galloway shunted out to the left wing.

It was from the right, though, where the next goal came, with Panutche Camara latching onto a low ball into the box to skip past his marker and slot home for his second goal in as many pre-season games just six minutes into the second period.

Moments later, Camara turned provider as Ennis grabbed his second, steering the ball beyond Rickard at the near post after Galloway dispossessed an Ashes attacker.

By the 65th minute, Lowe had cycled through his entire substitutes’ bench, handing valuable minutes to his squad ahead of Saturday’s trip to Bristol Rovers.

The fifth came on 74 minutes, with Camara once again proving too quick in advancing areas, sending Hardie through to lift the ball into the net. Less than 60 seconds later, Hardie could have added a second, hitting the post from close range.

In the end, that piece of woodwork deprived him of a second-half hat-trick, as he scored again on 84 minutes, latching onto Shirley’s ball in behind to dink over Rickard from a tight angle.

Shirley completed the scoring on 86 minutes, cutting inside and firing smartly home from just inside the box.