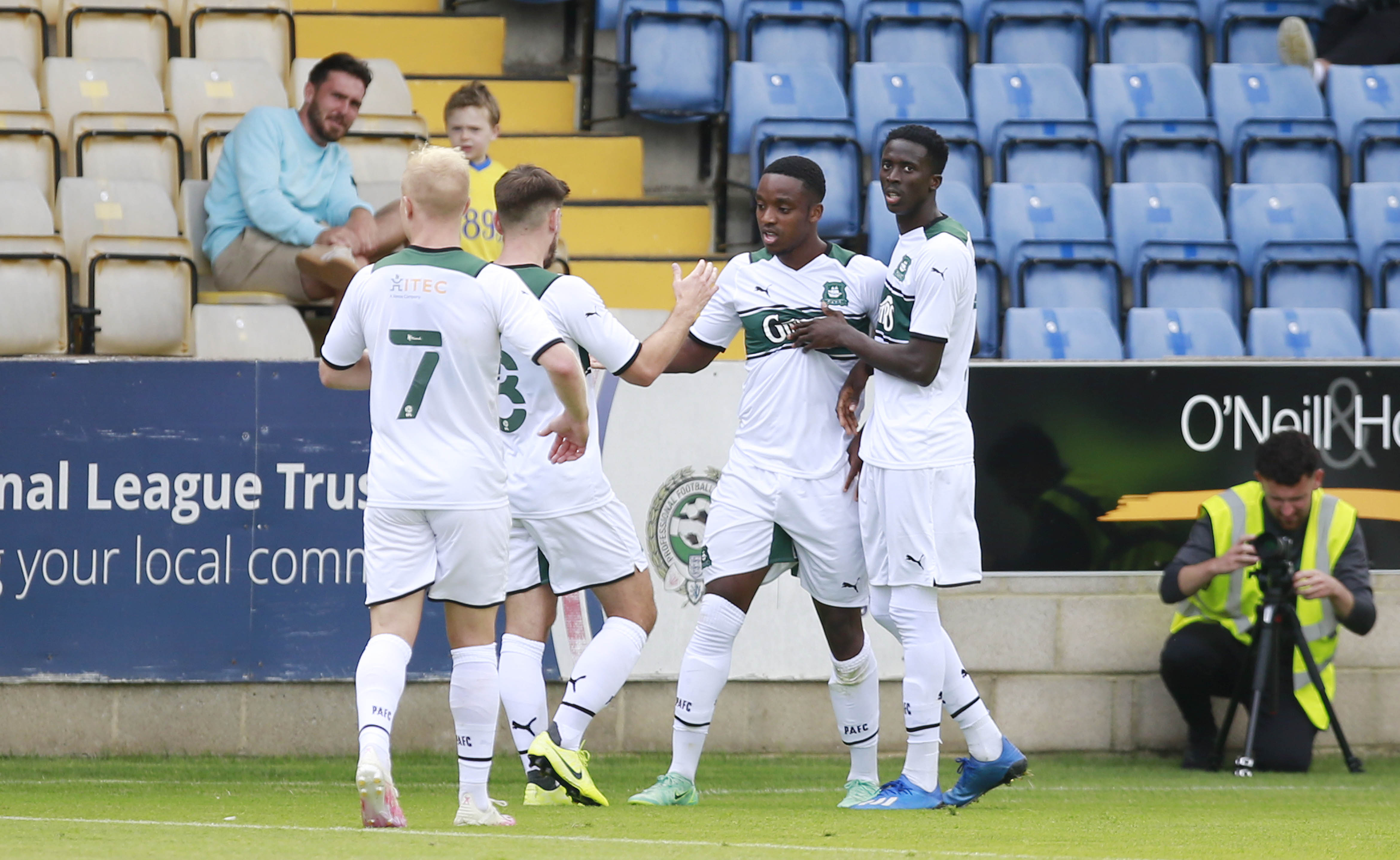 Argyle completed their pre-season campaign with a confident and composed 3-0 victory at Torquay United from the National League.

The familiar face in Gary Johnson’s Torquay side was young forward Klaidi Lolos, who came through the Home Park Academy, joining the Gulls this summer, while Argyle skipper Joe Edwards played for the United manager at Yeovil.

The early stages were littered with Pilgrim set-pieces in decent positions and the hosts were grateful to Ali Omar for two important defensive headers. At the other end, Armani Little lashed a 20-yard drive wide of the target.

A flowing Argyle move down the right saw Edwards release Camara for a cross cleared by Joe Lewis after good initial work from Randell. Clever play at the far post by Ennis then teed up Broom for a rising shot that was only just too high to trouble ‘keeper Mark Halstead.

Lolos was narrowly off target midway through the first half but Argyle quickly replied with a sumptuous passing move involving Edwards, Randell and Camara, culminating in a Luke Jephcott shot charged down by the Gulls.

Argyle were enjoying a lot of success down the right and a surging run from Edwards required a last-ditch challenge from Lewis to prevent a shot on goal, while the Pilgrim defensive trio of Ollie Tomlinson, Dan Scarr and Macaulay Gillesphey were looking comfortable in their work.

The deadlock was broken by a brilliant goal from Ennis, latching on to a clearance from a Torquay corner, powering his way past the home defence before rifling a terrific finish back across Halstead and into the bottom corner.

Argyle ended the half with a well-worked second, as Ennis again caused havoc to create room for Jephcott to shoot, and Halstead could only parry his save into the path of Camara for an easy finish.

The Greens started the second period with the same line-up, while Torquay withdrew Lolos for a trialist. Randell had the first shot in anger but the Plainmoor Young Player of the Year last season saw his effort deflected wide.

A clever low free-kick from Gillesphey, curled around the wall, forced Halstead into an excellent save for the Gulls in front of the Green Army, as Hardie replaced Ennis in attack, Danny Mayor came on for Broom and Mike Cooper for Burton.

Torquay responded with their best effort on the hour, a long-range curler from Jake Andrews confidently grasped by Cooper. A weaving run from Keelan O’Connell ended with a cross, again comfortably held by Argyle’s number one.

Brendan Galloway and Jordan Houghton for Law and Camara were the next two Pilgrim changes, quickly followed by James Wilson replacing Scarr, as Torquay continued to probe for an opening in the Argyle defence.

A nod down from the experienced Danny Wright gave a trialist room for a low drive but Cooper was again up to the task.

Youngster Finley Craske was given a run in place of Edwards for the final 15 minutes and Rhys Shirley replaced Jephcott. Hardie then added gloss to the Argyle with a goal on the turn after excellent work from Craske.

Ethan Mitchell and Brandon Pursall were the last introductions for Argyle, with Mayor denied a late solo special by Halstead, and we now move on to the real business at Rotherham next weekend.