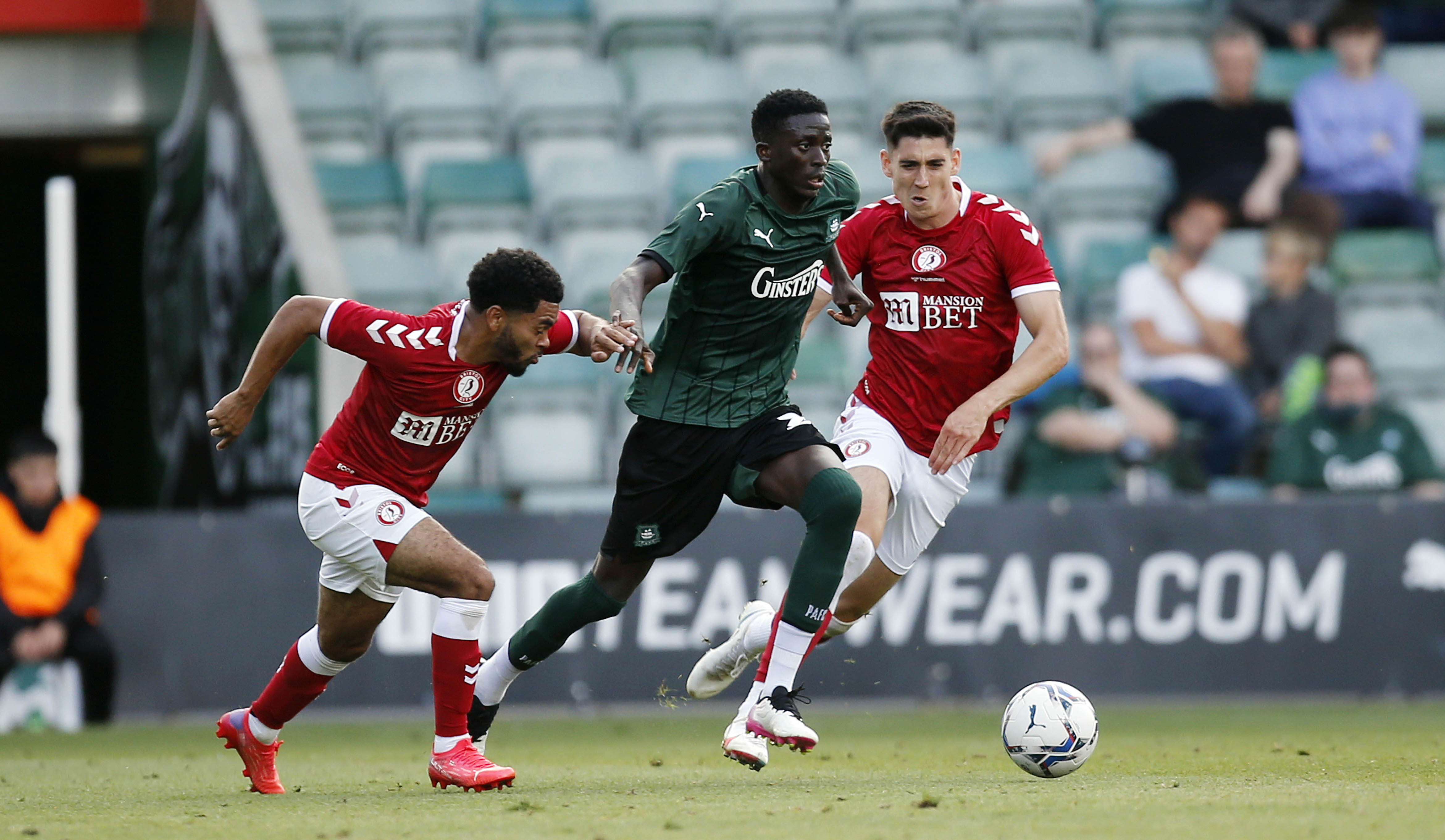 The Pilgrims suffered a narrow loss in their final pre-season game at Home Park and could feel a little unfortunate not to have come away from the Theatre of Greens with more to show for their efforts.

After a tight first period, the game exploded into life early in the second half, with a Chris Martin penalty saved by Argyle ‘keeper Mike Cooper - but there was nothing he could do about the only goal from Andreas Weimann on 55 minutes.

The Greens conjured a number of good chances and promising positions, but were just unable to find the leveller their performance warranted.

Argyle manager Ryan Lowe opted for two changes from the friendly against Middlesbrough, with Brendan Galloway returning to the back three and Ryan Hardie partnering Luke Jephcott in attack.

Bristol City included former Pilgrim loan defender Zak Vyner in their starting line-up and it was the Robins with a first shot in anger, Weimann dragging the ball wide following an incisive pass from Kasey Palmer.

A sweeping pass from Danny Mayor and the tenacity of Conor Grant on 19 minutes culminated in a fizzing low cross that wasn’t too far away from the run of Jephcott, as Argyle looked to increase their tempo in attack.

A terrific flowing move, involving Jordan Houghton, Grant and Galloway continued that mild momentum, quickly followed by an even better passage of play, with Grant firing in a low cross that was met by Joe Edwards and steered inches wide of the far post.

Mayor then turned up the class with a fabulous gliding run through the City defence and a threaded pass for Jephcott, who attempted a poked finish with the outside of his boot but was denied by a good save from Dan Bentley.

Argyle’s final flurry of a promising first half started with a delicious pass wide from Cooper and switched wide for another Grant cross cleared by the stretched City defence.

The second period opened with a soft penalty for the visitors, as Cooper tried to grab a looping ball over the head of Callum O’Dowda. It was harsh on the young goalkeeper, but he made full amends by diving brilliantly to his right to thwart Martin from the spot.

The Home Park roar grew ever louder as Argyle immediately broke forward down the left and the lively Hardie forced a decent block from Bentley at the other end.

The crucial breakthrough fell to the Robins, with O’Dowda cutting the ball back to Palmer and his ricocheted effort fell perfectly to Weimann for an easy finish at the far post.

Niall Ennis and Macaulay Gillesphey replaced Galloway and Jephcott on the hour, and Ennis introduced himself with a powerful run and cross from the right, which only just missed Hardie in the middle.

The Greens were controlling the play, with Mayor pulling the strings in the left channel, and a sublime turn and pass by Ennis, from a Mayor pass, very nearly released Hardie for a run on goal.

A deflected effort from Ennis skewed narrowly wide on 72 minutes and the subsequent Grant corner was glanced beyond the far post by Hardie. Adam Randell for Houghton was the next Pilgrim change.

Ennis continued his bright cameo with a low drive well held by Bentley, followed by a rising shot from Hardie that brought out an even better save from the visiting custodian.

Rhys Shirley and Ryan Law for Hardie and Grant were the final changes of Argyle’s evening and another encouraging display that could have been even better, with Hardie denied a strong penalty shout in the dying seconds and a Hardie drive saved by Bentley.