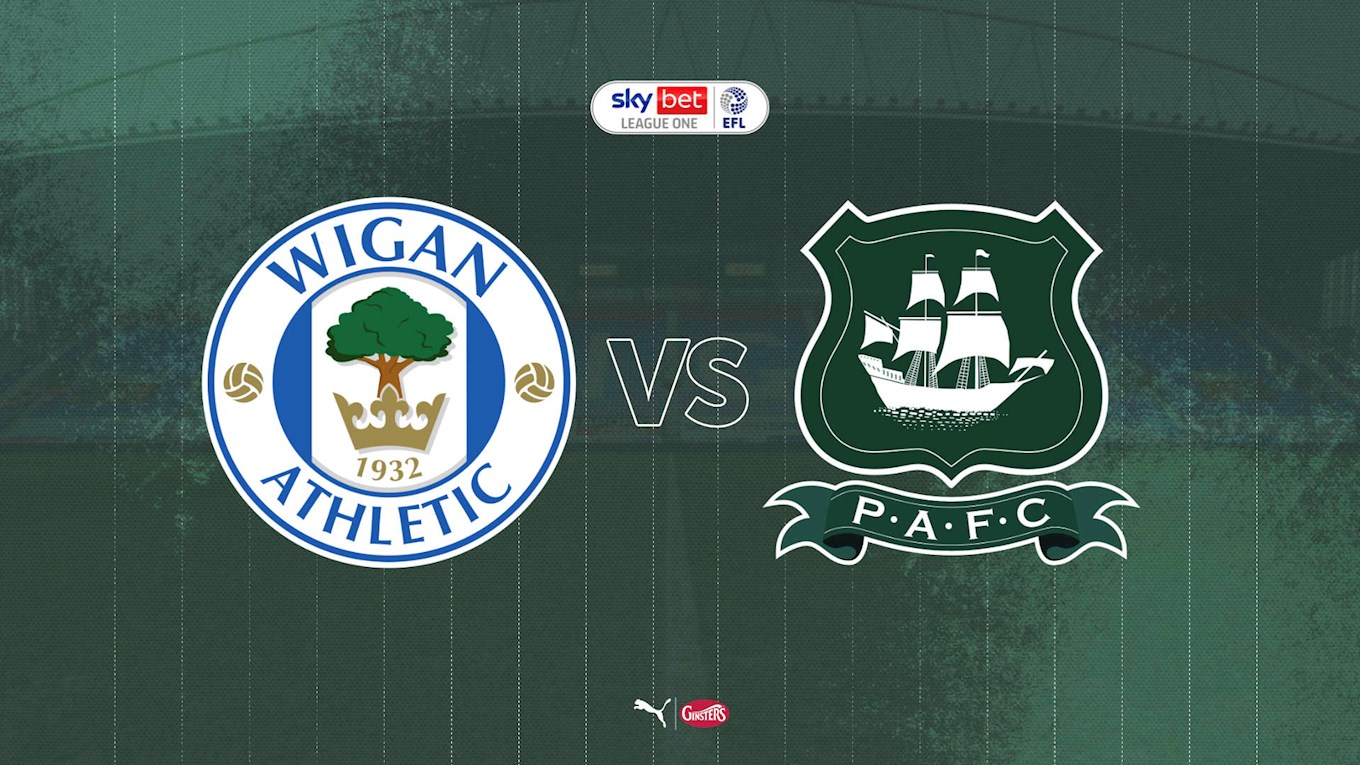 The Pilgrims are back in action on Saturday afternoon, travelling to the DW Stadium to take on John Sheridan’s Wigan Athletic.

Ryan Lowe’s Pilgrims have made a very positive start to life back in Sky Bet League One, and were sitting in the play-off places before midweek defeat at high-flying Lincoln City, which leaves them in ninth place.

The Greens were more than a match for their third-placed opponents for the first period, before falling behind to a dubious penalty early in the second term, from which they could not recover.

After a tumultuous summer, which culminated in cruel relegation from the Championship by virtue of a points deduction for entering administration, the Latics currently occupy 21st position in the division, with a record of two wins and five defeats from their opening seven fixtures.

With much of their Championship squad dismantled during the off-season, Wigan began their season with a 3-2 Carabao Cup defeat at Fleetwood Town, where experienced front man and captain Joe Garner netted twice.

This was followed by two successive defeats in League One – 2-0 at Ipswich Town, and 3-2 at home to Gillingham, with Garner and Kal Naismith the Latics’ scorers.

Despite a challenging opening to the season, Sheridan’s side grabbed their first competitive win in some style, putting six past Liverpool in the EFL Trophy, before picking up their first points of the league campaign a few days later – grabbing a surprise 2-1 win over Portsmouth at Fratton Park, with Lee Evans and Thomas James on the scoresheet. They secured their third win on the bounce shortly afterwards, with Garner scoring the winner in a 1-0 victory over Doncaster Rovers at the DW Stadium.

Since then, though, the Latics have found goals, and points, hard to come by. Tom Pearce netted for a rotated Wigan side in a 3-1 home defeat to Port Vale in the EFL Trophy, before three league games came and went without a goal, losing on the road at Crewe Alexandra (3-0) and Charlton Athletic (1-0), and at home against Peterborough United (1-0).

Operating with one of the smaller squads in the division owing to financial struggles, Wigan could be boosted by the return to fitness of full-back Pearce, while newest signing Matty Palmer, who joined on-loan from Swindon Town, is likely to make his second start in the centre of midfield, having made his debut against the Posh in midweek.

Argyle are without the trio of Conor Grant, Niall Canavan and Scott Wootton for the trip to Greater Manchester, with the three housemates forced to self-isolate following Grant’s positive COVID test. In addition, former Latic Lewis Macleod is likely to miss out as he recovers from a knee injury, while skipper Gary Sawyer remains on the sidelines with an ankle ligament injury.

ARGYLE AWAY TO WIGAN ATHLETIC IN THE EFL

This was the second of four consecutive league defeats for Bobby Moncur’s Argyle, in which we failed to score but conceded 13 times. Fortunately, the signing of centre-half Lindsay Smith from Cambridge United was a turning point in our season and we went on to finish in eighth place in Division 3.

Biggest win: We have twice won 2-0 at Wigan. The first time came under Peter Shilton’s management in a Second Division fixture on 1 May, 1993.

Argyle brought down the curtain on their away campaign with goals from Paul Dalton and Steve Morgan in front of just 1,432 fans. The second time came in a Championship match on 6 November, 2004.

Undefeated, top of the table Athletic were surprisingly beaten by Bobby Williamson’s mid-table Argyle. Our goals came from skipper Paul Wotton and Scottish international forward Stevie Crawford. Wigan went on to finish in second place in the division and were promoted to the top-flight of English football for the first time.

The Ciderman’s team had drawn 1-1 at Lincoln City the previous Tuesday evening to end a post-war club record of nine consecutive league wins. That run had seen the club rise up the Division 3 table from tenth to second spot.

However, the Greens were distinctly second best at Springfield Park, where strikes from Paul Jewell (2) and David Lowe saw the Latics move above us in the table on goal difference. However, victories in our final four games of the season led to a second-placed finish and automatic promotion. Wigan finished fourth and missed out on promotion in the final season before the introduction of the play-offs.

A reminder: Saturday’s fixture kicks off at 3pm, and is available to stream live, worldwide, through iFollow Argyle. Match passes cost £10. Click here to buy yours.