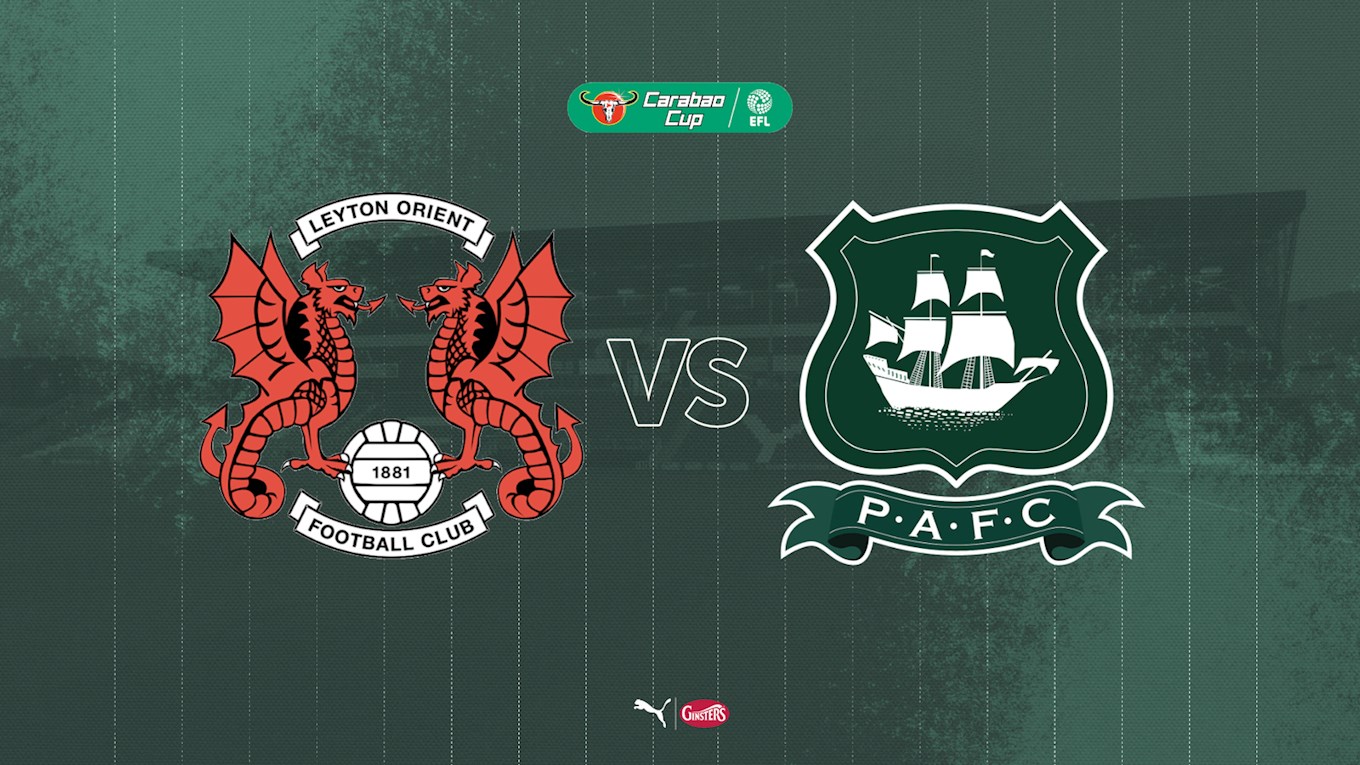 Argyle head to the Breyer Group Stadium on Tuesday night looking to extend their encouraging start to the 20/21 campaign against Leyton Orient.

Having overcome Sky Bet Championship opposition QPR in the opening round of this season’s Carabao Cup, the Pilgrims take on their League Two opponents knowing that a home tie against Premier League giants Tottenham Hotspur awaits the winner.

The trio of Joe Edwards, Danny Mayor and Frank Nouble were on target for the Greens in their first round triumph over Rangers at Home Park, while Orient progressed to the second stage thanks to goals from Danny Johnson and Connor Wilkinson in their come-from-behind victory away to Forest Green Rovers.

Both sides have enjoyed promising starts to their respective league campaigns, too, with Argyle overcoming a much-fancied Blackpool side courtesy of Luke Jephcott’s third minute goal at Home Park on Saturday afternoon. For Orient, Johnson’s third goal in as many games secured a last-minute winner away at Oldham Athletic in League Two – with his other strike coming in the O’s 3-2 victory over a Brighton under-21 side in the EFL Trophy.

The two teams met in the first round of the competition last season, with Callum McFadzean and Dom Telford on target in a 2-0 victory for Ryan Lowe’s men at Home Park.

The Greens also beat Orient 4-0 at the Theatre of Greens in Sky Bet League Two action a few weeks later, with all four goals arriving before the half-time interval. With the season curtailed early due to the coronavirus pandemic, the return fixture did not take place in East London.

Argyle striker Ryan Hardie returns to contention having missed out against his parent club on the weekend, while manager Lowe will assess the fitness of duo Luke Jephcott and Conor Grant, who suffered knocks during the Pilgrims’ victory over the Seasiders on the weekend.

ARGYLE AWAY AT ORIENT IN ALL COMPETITIONS

Sammy Black and Ray Bowden were on target for Robert Jack’s Pilgrims at Millfields Road against Clapham Orient, who became Leyton Orient after the Second World War.

Jimmy Spencer and Ryan Donaldson were on target as the Greens won 2-0 at Brisbane Road, with the hosts reduced to nine men. That season, Argyle were promoted to League One as runners-up, while Orient were relegated to the National League.

Our biggest winning margin away at Orient is two goals, and the highest-scoring effort from the Greens came in 2016. Peter Hartley opened the scoring on the brink of half-time, before a second-half double from Jake Jervis saw Argyle out of sight. Lloyd James pulled back a late consolation for the hosts.

The Pilgrims lost out in a memorable seven-goal thriller back in 1999, despite coming from behind on a number of occasions. Having slipped to a 2-0 deficit early on, strikes from Steve Guinan and Dwight Marshall restored parity heading into the interval. Having fallen behind again to an Alex Inglethorpe strike, Ronnie Mauge’s set-piece header looked to have secured a 3-3 draw, only for Tony Richards to head home a winner for the O’s, who were defeated in the play-offs that season.

The game kicks off at 7.45pm, and will be available to watch live on iFollow for UK-based supporters. Click here to purchase a match pass.