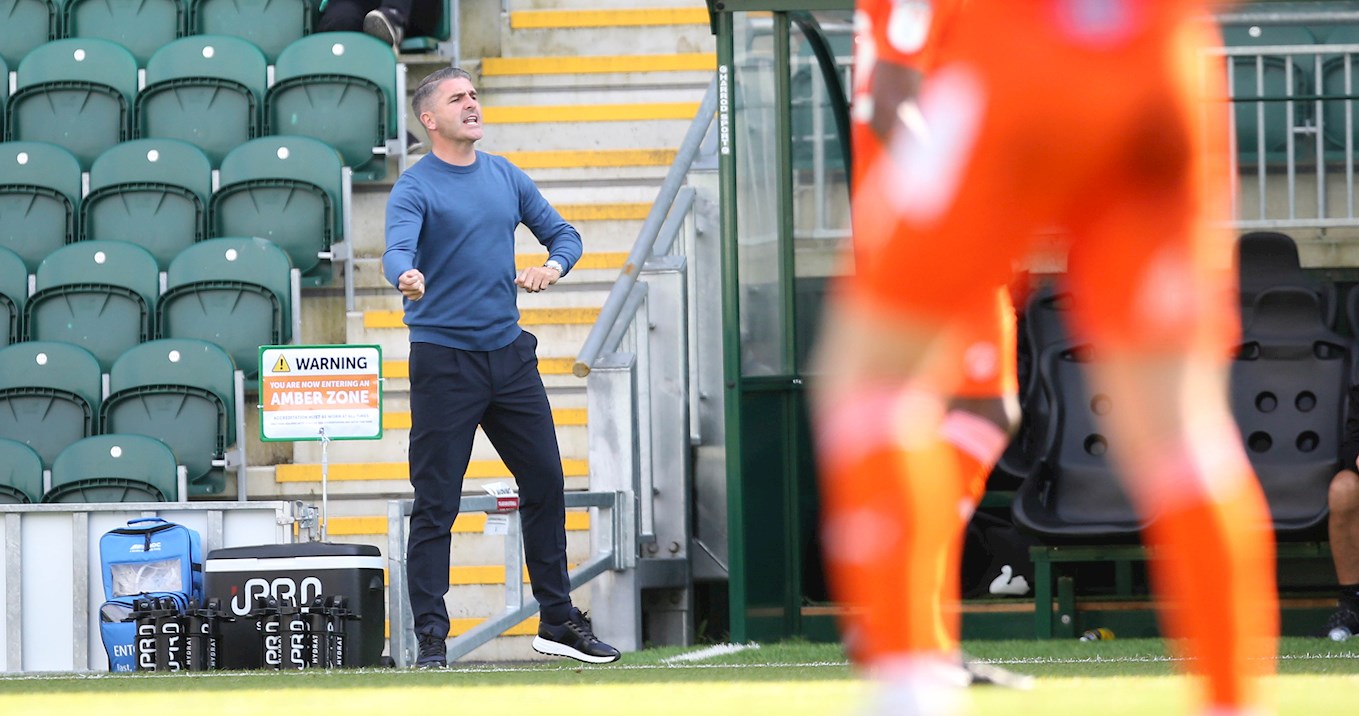 Argyle manager Ryan Lowe was delighted with the character and commitment of his team during the Pilgrims’ opening day Sky Bet League One triumph over Blackpool at Home Park.

The Greens enjoyed a dream start upon their return to the third tier, with Welsh under-21 international Luke Jephcott breaking the deadlock with the season only three minutes old, using his goalscoring nous and excellent positioning to react quickest to Will Aimson’s right-wing cross.

Lowe said: “It was something we worked on, early on in the week – we felt we could press high, get regains, and counter-attack.

“We felt we could get at them, and they’d give us the ball back in certain areas – counter-press. Their game plan was probably similar, they felt that they could jump on us.”

“They’re a good team, with good players, and the coaching staff do it the right way – it was a big three points for us. The resilience, the attitude and commitment was different class. Seeing the fighting spirit of the lads shows me that they’ve got real togetherness and they want to win games of football."

After dominating the early exchanges at Home Park, with their attacking philosophy looking equally dangerous a league higher, the Greens were gradually forced back by Neil Critchley’s much-fancied Blackpool side as the first-half reached its conclusion.

It was from this moment on that the Pilgrims evidenced a wholly different set of qualities – desire, commitment, and bodies on the line – to secure a clean sheet and a vital three points.

The manager said: “That’s what you have to do to win games of football. Yeah, we want to play football, play a nice way, but you’ve got to be horrible in that department.

“Heart, desire, commitment, bravery. What our lads weren’t going to do was roll over – they certainly won’t do it under me. We still had some good patterns of play, and had some good chances, but 1-0, three points, we’ll take it.

“I don’t want to give too many secrets away, but you do the work. Blackpool have done their work on us, and we’ll find areas where we feel we can be a threat. We work on a game plan every time we play an opposition team – sometimes it goes for you, sometimes it goes against you. If you rock up and think you can just get three points, you’re not going to win.”

Having won two consecutive promotions from Sky Bet League Two, the coaching staff at Home Park would have been forgiven for feeling the pressure ahead of Saturday’s long-awaited league opener. As far as the Argyle manager is concerned, though, it was business as usual – and he is relishing the challenge of managing at a higher level.

“[Friday] When we did our work, I went and got some lunch on my own just to get out of the way, and gathered my thoughts a bit. We had a hectic week, built up for it, and the preparations were done with the lads.

“I don’t think it’s pressure playing a game of football against a good football team in Blackpool. We want to pit our wits against big clubs, and we’ll continue to do that.

I don’t think there’s any pressure, it’s always nice to get a win, of course. I’ve seen a side to my lads, like I’ve seen last season, and if we continue do to that, we’ll be fine.”

Argyle will be back in action on Tuesday night, when they make the trip to face Leyton Orient in the Carabao Cup second round. The fixture will be available to watch live on iFollow for UK-based supporters. Click here to purchase a match pass.