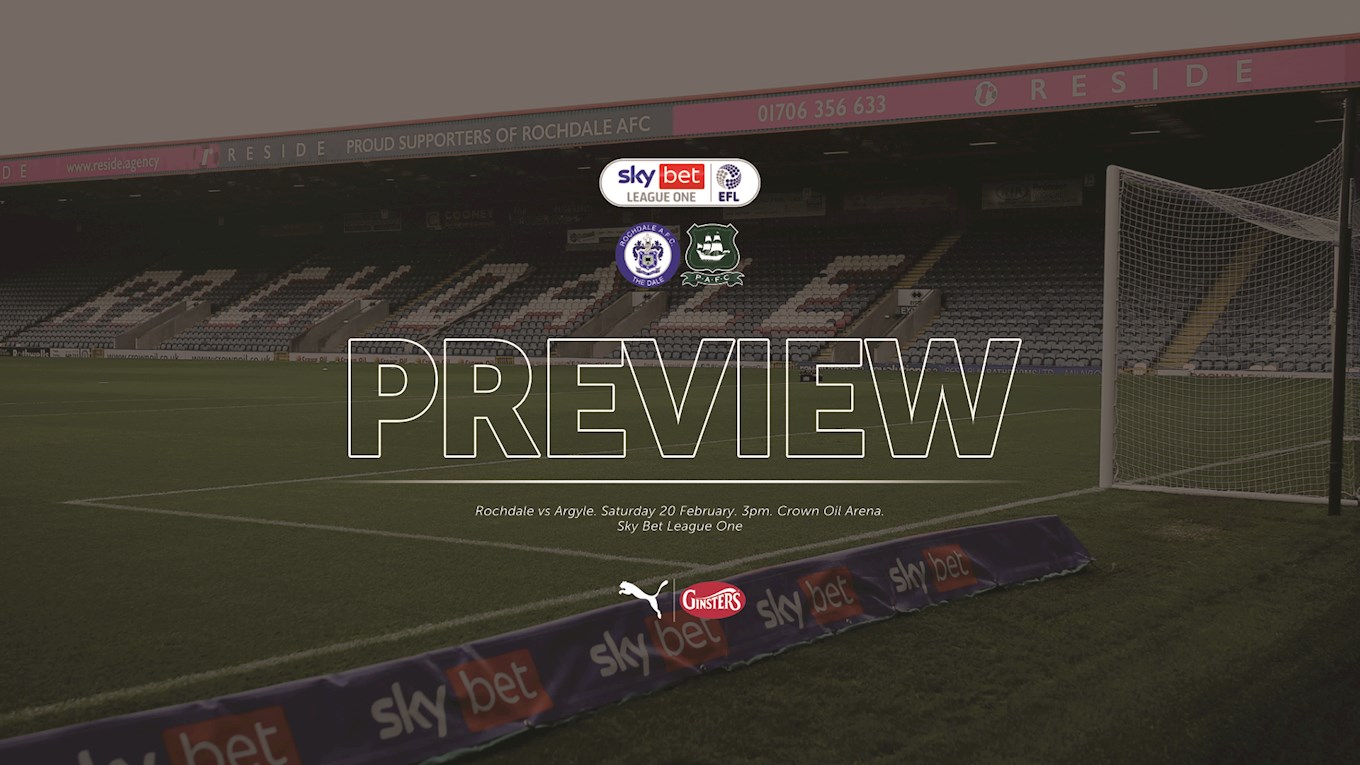 The Greens are the only team in League One to remain undefeated in 2021, and they travel to Greater Manchester on the back of successive 1-0 wins against Accrington Stanley and Fleetwood Town.

Rochdale, who currently sit in 19th in the table after an unfortunate 1-0 defeat at Blackpool in midweek, are yet to win at home in this calendar year. Brian Barry-Murphy’s men have looked more comfortable on the road this season, securing five of their six league victories away from the Crown Oil Arena – including a 4-0 win at Home Park back in December.

In their last home fixture, Dale fell to a 4-1 defeat against Milton Keynes Dons. The Dons opened the scoring five minutes into the game, before Matty Lund tied the scores up before the interval. However, three goals in seven second-half minutes condemned Rochdale to defeat.

Midfielder Lund, now in his second spell at Dale, is the club’s leading goalscorer this campaign, with 12 goals in all competitions. Lund was crowned the Sky Bet League One Player of the Month for January following a string of influential performances, while 18-year-old starlet Kwadwo Baah, who has signed a pre-contract agreement to join Manchester City at the end of the season, was also named the EFL’s Young Player of the Month.

Dale are reporting a relatively clean bill of health ahead of Saturday's encounter, with Jimmy Ryan is the only reported risk of absence through a knee injury. Captain Eoghan O’Connell has shaken off a hamstring problem in recent weeks to return to the starting line-up, while experienced centre-half Paul McShane has also returned to the squad following a calf injury.

For the Pilgrims, club captain Gary Sawyer and midfielder Lewis Macleod both continue to make great strides in training, but manager Ryan Lowe does is keen not to rush either into action. Meanwhile, Joe Edwards is firmly back in contention, having bounced back from a knee injury to make an appearance off the bench in the Greens’ victory over Fleetwood Town. Wing-back George Cooper is the Greens' only long-term absentee, currently recuperating from knee surgery.

ARGYLE AWAY TO ROCHDALE IN THE EFL

Jack Rowley’s Argyle won 2-0 on their first visit to Spotland. Goals from Wilf Carter and Harry Penk meant that the Greens continued their unbeaten start to the season, following a 1-1 draw at Hull City two days previously.

Argyle would go on to win the Division Three title that season, while Rochdale finished bottom of the table and were relegated to Division Four.

Luke Jephcott made his full EFL debut as Derek Adams’ side beat Rochdale 2-1 on our last visit.

Joel Grant scored for the third successive time for Argyle against Dale to give us the lead on 73 minutes. Three minutes later, the Greater Manchester side equalised through Bradden Inman. A howler from the home side’s ‘keeper, Josh Lilllis, gave Argyle the points ten minutes from time – David Perkins was credited with the own goal.

Our record win over the Dale came early in Tony Waiters’ reign as Argyle manager.

Saturday's fixture is available to stream live, and worldwide, on iFollow Argyle. Click here to purchase your pass.