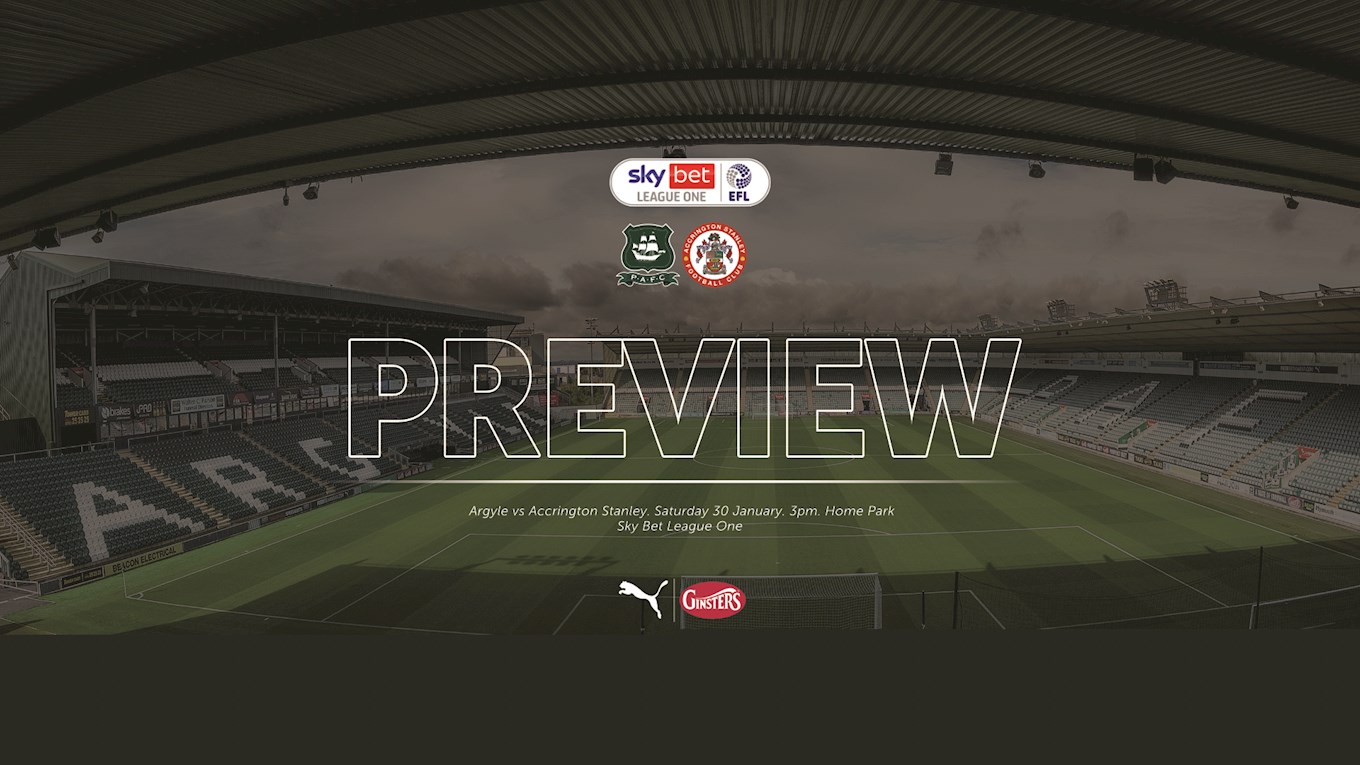 This weekend sees Ryan Lowe’s Pilgrims return to Home Park after a mammoth run of away fixtures, as they host Accrington Stanley in Sky Bet League One.

Argyle, who now sit in 13th place in the table, remain unbeaten in the league in 2021, and come into the fixture on the back of their second away win on the bounce, with goals from Panutche Camara and Ryan Hardie seeing off Swindon Town in midweek.

2021 has seen the Greens mount an impressive charge up the table, securing three wins and one draw from their four league games, as well as impressive Emirates FA Cup displays at Huddersfield Town and Premier League Sheffield United.

The calendar year began with a 1-0 win over Gillingham at Home Park, courtesy of a sweet Luke Jephcott half-volley. The Pilgrims were on their way to another 1-0 victory against Crewe Alexandra, before a 64th minute equaliser saw the points shared.

The Greens then hit the road for their longest trip of the campaign, and left the Stadium of Light with all three points after a superb 2-1 win against Sunderland, with goals coming from captain Joe Edwards and full debutant Adam Lewis.

John Coleman’s ever-competitive Stanley outfit are currently in an impressive eighth position in the league, despite having played fewer matches than any other team in the division - owing to coronavirus-enforced fixture suspensions earlier in the season.

This curious fixture conundrum left Stanley playing back-to-back league games against high-flying Hull City, with each side picking up the win on their home turf.

Having lost 3-0 at the KCOM Stadium in the first of a double header last week, Stanley bounced back at the Wham Stadium, winning 2-0, through goals from Dion Charles and Matt Butcher.

Charles, plucked from non-league Southport in 2019, is Stanley’s top scorer this season so far, having netted seven times in 19 games. As well as putting one past the Tigers last time out, he also bagged a brace in Stanley’s 2-1 victory over Milton Keynes Dons back in December.

On Saturday, the visitors will be without defender Ross Sykes, who is unavailable for the remainder of the season with a tear in his quad, and striker Ryan Cassidy is also likely to miss out with a thigh injury. Veteran midfielder Gary Roberts, who signed for Stanley on 4 January, still awaits his first start in the league.

The Greens will be without long-term absentee George Cooper, and club captain Gary Sawyer, although the latter has begun light training after recovering from an ankle injury. Wing-back Adam Lewis could be back in contention following a knock sustained in the victory at Sunderland, and midfielder Lewis Macleod is also nearing a return.

ARGYLE AT HOME TO ACCRINGTON STANLEY IN THE EFL

The defeat left Argyle second in the table, three points behind leaders Hull City, who had played two games more. Fortunately, the Greens went on to win the divisional title that season, while Stanley finished sixth from bottom.

Derek Adams’ men failed to build on the away win at Rochdale seven days previously.

Sam Finley, Sean McConville and a former Argyle trialist, Jordan Clark, scored the Lancastrians goals in just 17 second half minutes. The defeat left Argyle second from bottom of League One.

Biggest win: Our two home victories against Accrington have both been by one goal to nil. The first came in February 2015, when Lewis Alessandra scored the winner for John Sheridan’s Argyle in League Two.

A little over eight months later, and again in League Two, Reuben Reid was the Pilgrims’ hero when he netted a superb volley for Derek Adams’ table topping side in October 2015.

Most goals in a single game: Six, in the first meeting between the clubs in 1959.

The Pilgrims' clash with Accrington Stanley kicks-off at 3pm, and is available to stream live and worldwide on iFollow Argyle. Click here to purchase your pass.