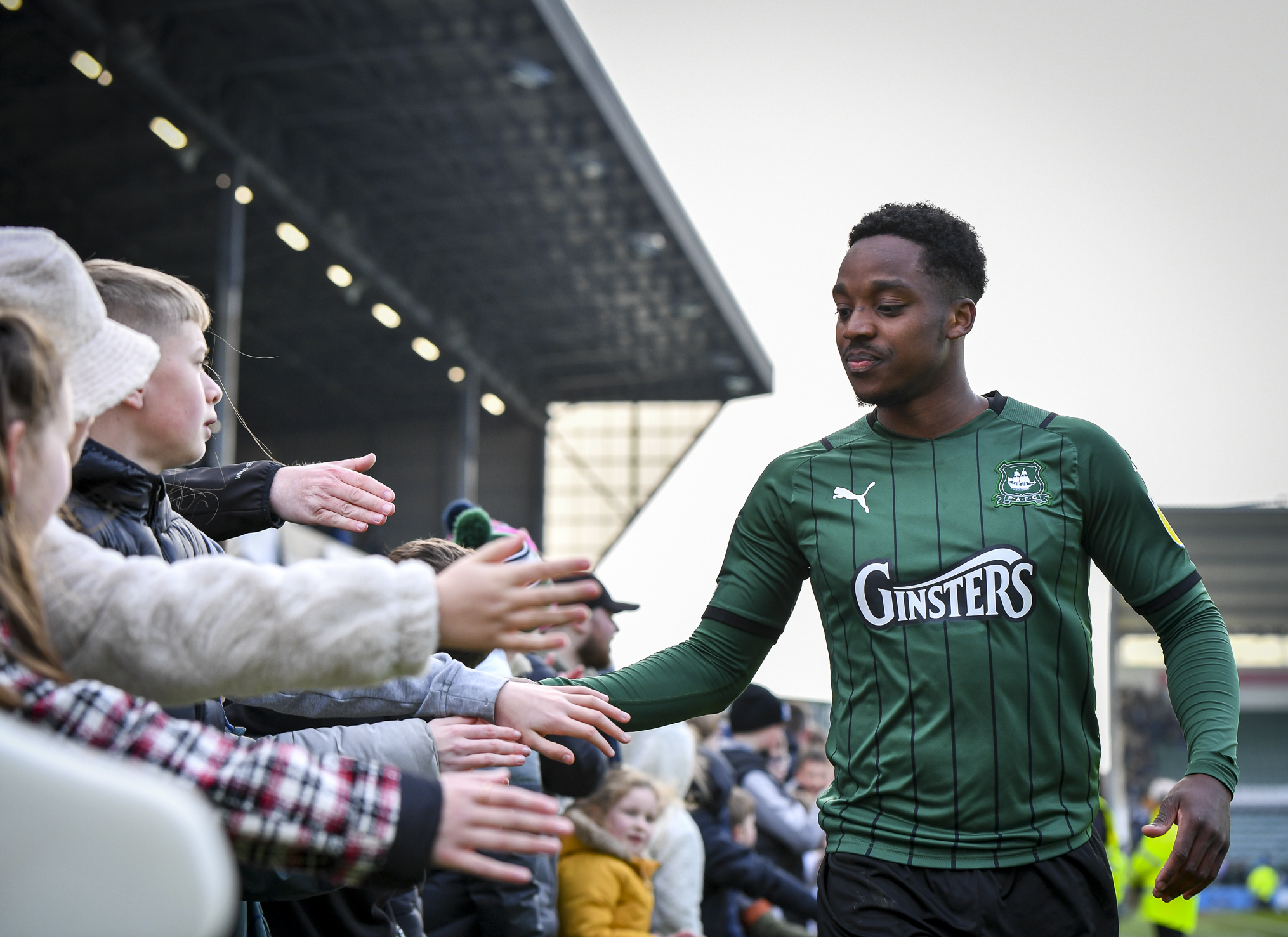 A fourth capacity crowd of the season awaits Steven Schumacher's Greens at Home Park for the visit of fellow play-off chasers Oxford United on Saturday.

The fixture is also our 12th annual Armed Services Day fixture, sponsored by Babcock International, giving the club the opportunity to pay tribute to the armed servicemen and women of our city and region, on the 40-year anniversary of the beginning of the Falklands conflict.

Are you joining us this weekend? Read on for our fans' guide.

We continue to encourage supporters to arrive early. With big crowds continuing to attend games at Home Park, large numbers of supporters arriving late cannot have an expectation of making it into the stadium before kick-off.

Please note that while much of the information found below is similar to previous fixtures, we update this guide for every fixture, with most recent updates provided at the top of the list below.

Updated guidance for medical emergencies in the crowd

With over 20 million supporters attending EFL fixtures each season, there will be occasions where a supporter will require medical treatment during a match.

The health and safety of everybody attending matches at Argyle is of paramount importance, so fans can be reassured that all clubs have a Matchday Medical Plan with dedicated crowd medical teams in stadia, ready to assist at any point during the match.

If a supporter becomes unwell at Home Park and requires medical assistance, then we strongly advise that the nearest steward is made aware who will ensure that the crowd medical team is notified and that appropriate care is provided.

It is important to note that the responsibilities of the crowd medical teams are separate to club medical support teams for players.

This season, a number of EFL matches have been paused while medical treatment has been provided to supporters.  On several occasions, the usual Matchday Medical Plan has been bypassed with members of the Clubs’ on-pitch medical teams called in to assist.

Supporters are asked not to alert players or staff on the pitch as in most cases the crowd medical team will be able to provide medical care as the match continues.

Should a situation arise where there is a need for the match to be halted, a decision will be taken between the crowd medical team, the ground safety team and the match officials with the information relayed to the supporters at the ground.

This is in line with the briefing note produced by National Events Medicine Advisory Group (NEMAG) in conjunction with the Sports Grounds Safety Authority’s (SGSA) and football authorities.

Again, it is important to remember that if you have any concerns or need assistance while at the match, then please notify your nearest steward.

The Plymouth Band of Her Majesty’s Royal Marines will headline celebrations at our Armed Services Day fixture, sponsored by Babcock International.

The musical wing of the Royal Navy will perform pre-match and at half-time, marching in from the vehicle gate located on the corner of the Devonport End and Lyndhurst Road Stand at 2.20pm.

Outside the stadium, the Plymouth Pipe Band will perform from 1.30pm, while a number of local and national military organisations will host stands and displays around Home Park, including – 29 Commando Royal Artillery from The Royal Citadel, the Royal British Legion, the Royal Monmouthshire Squadron, event sponsors Babcock International, the Federation of Plymouth & District ex-Services Association, and the Royal Navy's Plymouth Bomb Disposal team.

At 2.40pm, members of the Armed Services will compete in a penalty shoot out against mascot Pilgrim Pete.

Standard bearers, carrying eight different standards representing the combined services, will form a tunnel for players to emerge from onto the pitch before kick off, while the military band will play the club’s traditional walk-out anthem, Semper Fidelis, before the match ball is delivered to the officials by a Royal Navy Bomb Disposal robot and the national anthem is played.

At half time, medal-wearing Falklands veterans will take a lap of honour around the Home Park pitch at half time, and we ask supporters to show their appreciation with a round of applause, as well as contributing to a bucket collection in aid of the Falklands Veterans Foundation and the South Atlantic Medal Association.

Please note that tickets are sold out for this fixture, save for handfuls of season ticket seats going on resale in small batches.

As always, we encourage supporters to make use of digital tickets wherever possible, reducing queuing times at the Ticket Office, as well as the impact of ticket production. Click here to read more about digital tickets.

Should supporters arrive late for the fixture, there will be one late turnstile open in the Devonport End stand, and it will remain open until half-time.

Family fun from 11am

Our outstanding Argyle Community Trust team will be providing a whole host of free family friendly sports and games just outside the stadium, beginning at 11am.

Activities include inflatable cricket, dodgeball, tennis and archery, and the event can be accessed outside of the Devonport End, very close to the entrance to the seated family area in block 6, and adjacent to the main car park.

Families interested in participating in these free activities can simply turn up from 11am and get involved. However, for specific queries or further information, you are welcome to email community@pafc.co.uk.

If it is your first time visiting the Theatre of Greens, please click here to check out our first-time fans guide.

From 1pm, the popular Mayflower Grandstand Fan Zone is once again open for this fixture, offering supporters access to delicious food and drink while enjoying live music.

Located within the gated area behind the Lower Mayflower, the Fan Zone aims to provide the best-ever match-day experience for the Green Army seated on that side of the stadium.

Having changed our working arrangements with the NHS to erect a smaller marquee to double up as a versatile space for supporter use on match-days, supporters will notice the return of a number of food kiosks, bars, and a covered area with tables and chairs.

The new catering vendors located within the Mayflower Fan Zone will serve a range of hot, cold and alcoholic drinks, as well as offering fresh and delicious food – including hot dogs, fries, pasties, pulled pork baps and baguettes.

Copies of our award-winning match-day programme, The Pilgrim, are once again available around the stadium for purchase at £3, while a limited number will also be available to purchase from the Argyle Superstore.

The Superstore will be open until 30 minutes after full-time, selling a range of Argyle memorabilia, replica kits, and souvenirs.

For any accessibility or match-day support queries, our dedicated Disability Liaison Officer can be contacted on disability@pafc.co.uk.

Sensory packs, which include a drawstring bag, ear defenders, fidget spinners, a sensory ball, an awareness card and lanyard, as well as further match-day information, are now available for children who need them – free of charge. Click here to find out more.

Concession kiosks will be open, serving a range of food and beverages.

There will be a discount of 25% on all products purchased from food and beverage kiosks inside the stadium between 1pm-1.45pm.

Meanwhile, toilet facilities will continue to operate with a one-way system. In order to avoid large queues at peak times (e.g half-time), we advise supporters to plan ahead for toilet breaks, using facilities when they are likely to be less busy.

We encourage fans to pay using contactless methods wherever possible to reduce queuing times. Supporters are advised that the concessions in the Upper Mayflower Grandstand operate on a cashless basis.

On your approach to Home Park, you will notice a number of external catering venues offering hot food and refreshments. Please note that prices and menus at these outlets are not controlled by the club, and are subject to change. There is also a food court inside the Mayflower Grandstand Fan Zone, offering a range of hot, cold and alcoholic drinks, as well as offering fresh and delicious food – including hot dogs, fries, pasties, pulled pork baps and baguettes. As above, these kiosks are not operated by the club, and prices are subject to change.

Our food and beverage kiosks throughout the stadium serve a range of food, beverages, and alcoholic drinks, stadium-wide. Please see an indicative menu and pricing below.

Supporters should be prepared to be searched by our security team as they enter the stadium.

Wherever possible, we will ensure that 'wand' searches are also undertaken by members of the same gender. If that is not the case upon entry, and you feel at all uncomfortable, please raise this with a member of the security team - who will make the necessary arrangements.

As with all major sporting events, bringing bags to the stadium is actively discouraged. However, fans arriving at Home Park with a small personal bag (for example, medical bags or handbags) capable of being stowed under seats is permitted. Please note, supporters should expect this to be searched before entry.

We ask that supporters arrive in plenty of time to avoid queues forming as kick-off approaches.

For more information on what we are doing to keep you safe, and how you can help make attending Home Park a great experience for all, please check out our Return to Stadium Guide.

A reminder that supporters can tune in to our free pre-match show live! Whether you are in the stands at Home Park, on the way to the game, or watching from home, simply go to our YouTube channel to enjoy live build-up featuring Argyle TV's Erin Black and former Pilgrim Ian Stonebridge.

Where can I purchase souvenirs?

The Argyle Superstore, located next to the Home Park Ticket Office by the main entrance to the Mayflower Grandstand, is open from 9am until 30 minutes after full-time on match-days. The Superstore is operating a one-way system with Covid measures in place to ensure safety of supporters and staff alike.

In addition to the Superstore, there is a large pop-up retail outlet located on the corner of the Devonport End and Lyndhurst Road Stand, selling a range of supporter favourites, including training wear and souvenirs.

Inside the stadium, supporters will find a retail unit located in the concourse of the Lyndhurst Road Stand, underneath Blocks 14/15, also offering a selection of our most popular items.

It's not just team news and ticket information available on the official Argyle App, there are lots of fun ways to enhance your matchday and prove your football knowledge to the rest of your family!

Take our pre-match quiz to see how much you really know about the opposition, and don't forget to vote for your Man of the Match from our shortlist of four contenders straight after the final whistle.

Not got the App yet? Click here to download free on Android devices, and here for Apple.

Outland Road Car Park, adjacent to Home Park is a very large – and free! – car park. It is council-run, and is typically a park-and-ride car park into the city. It is free to use on match-days, but will obviously begin to fill up very early for many fixtures, especially local derbies, Bank Holiday fixtures, etc.

Additional street parking is available surrounding Home Park, but please be mindful of local residents, park sensibly, and be aware of any parking restrictions and permit areas.

There are also several large pay and display car parks in the city centre, which is within walking distance of Home Park, but not advised for those who struggle to walk beyond short distances.

As always, we encourage supporters to provide feedback on their experience at Argyle to feedback@pafc.co.uk.

We can’t wait to see you on Saturday, and hope you have a fantastic match-day experience at Home Park.