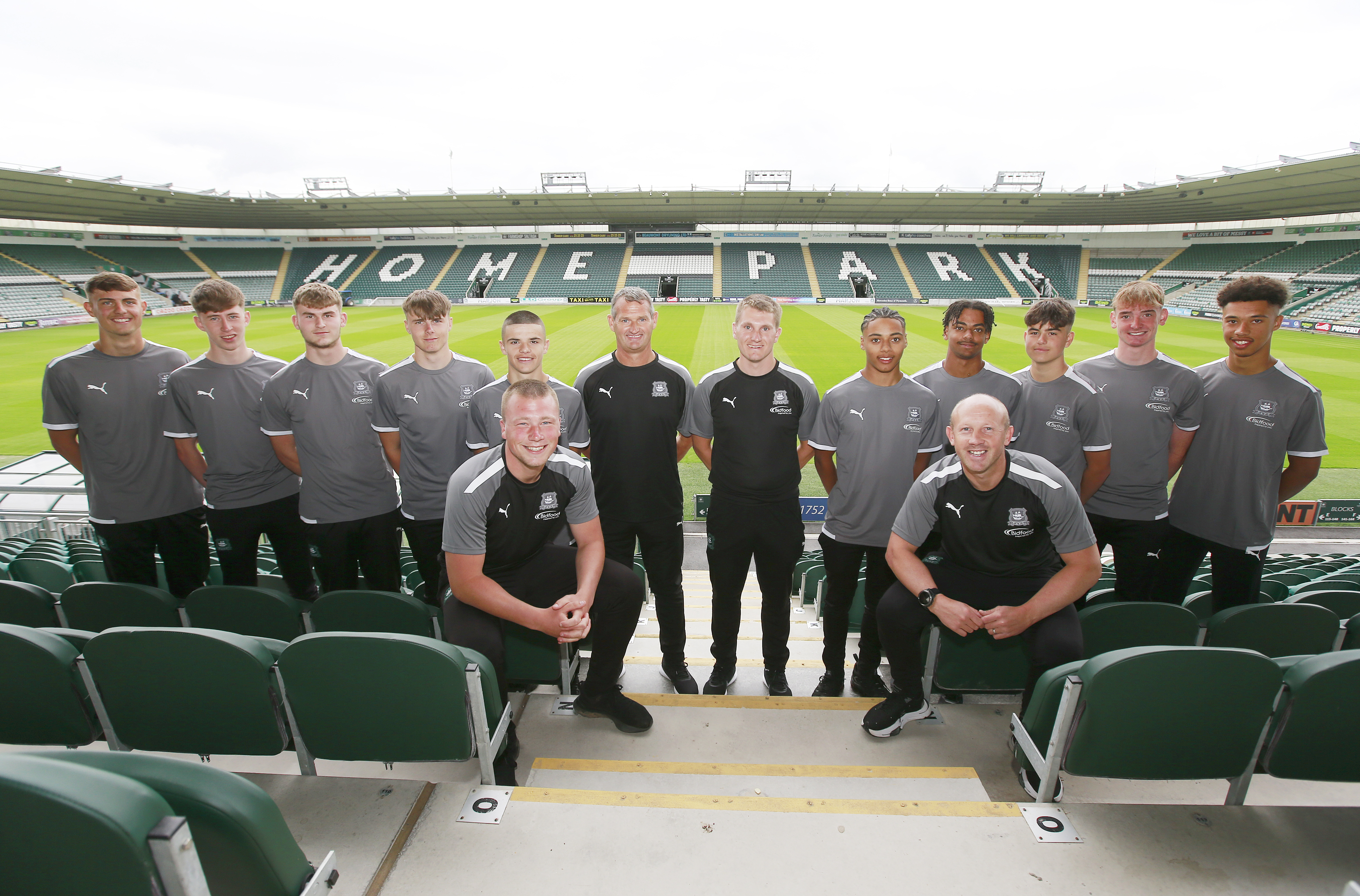 Ten new faces have put pen to paper and signed scholarship deals at the Argyle Academy.

The annual under-18 presentation night was an opportunity to welcome the ten new scholars to the final stage of their journey through youth football, eight of whom have come all the way through the Academy.

Last season saw a huge amount of success for the under-18 side, who ended up as EFL Merit League One champions.

They lost just once in a campaign that saw them lift the title on the final day of the season thanks to a 4-0 win over Oxford United.

On top of that league success, Darren Way’s side went on a magnificent run to the third round of the FA Youth Cup, a journey that was eventually ended by Brighton and Hove Albion.

Seven Academy players made their debuts in the first team, with three players going on to sign the first professional contracts at Home Park.

Academy Manager Phil Stokes will be hoping for more success this year and was upbeat about the latest crop of youngsters to sign scholarship deals.

He said, “I’d like to congratulate all the players on signing a two-year scholarship with us, this is the next part of their football journey on a full-time training model.

“It’s great to see that eight players have been with the Academy from a young age and developed through our Academy programme, and we look forward to working with them on the next stage of their footballing development.”

"We have the highest expectations of our young players, and we want them to become first-team players in the future.

“It’s an exciting time to be involved in the Academy with a dedication team of Academy staff supporting the players over the next two years and we hope they utilise every second of every day that is available to them.

“If they do that, then they have the ability to follow in the footsteps of players like Finley Craske and Brandon Pursall, who achieved a professional contract last year – and first-team squad members like Mike Cooper, Ryan Law, Luke Jephcott and Adam Randell.”

Attacking midfielder, Caleb Roberts joined the Greens as a nine-year-old having impressed at Argyle’s Pre-Academy.

An Ivybridge Community College student, Caleb has represented Plymouth schoolboys at under-11 level.

He is a name who will be well known to Argyle fans as he made his first team debut in the Papa John’s Trophy game with Arsenal under-21s.

During the course of the 2021-22 season, Caleb played a number of fixtures for the under-18 side and scored in the season finale, a 4-0 win over Oxford United which clinched the EFL Merit League One title.

Freddie Issaka, from Truro, attended Truro School and has represented West Cornwall Schoolboys at under-13, under-14 and under-15 level.

Freddie attended the Cornwall Centre of Excellence in St Stephen before progressing to the Academy at aged 11.

The striker made Argyle history in August 2020, becoming the club’s youngest ever player aged 15 and 34 days.

That appearance against Newport County in the Papa John’s Trophy was his debut for the club and to date only appearance in the first team.

During the 2021-22 season, Freddie played a number of fixtures for the under-18 side and was part of the side which clinched the EFL Merit League One title. He has also has international recognition, having represented England and Wales under-16s.

Jack joined the Cornwall Centre of Excellence at Brannel School and progressed into the Academy at the under-11 stage and played for East Cornwall schools under-14s.

Jack represented the Academy in the Super Cup in Northern Ireland in 2019 and made a handful of appearances in Darren Way’s under-18 side last season.

Midfielder Harley Sneap attended Torquay Academy before being signed to the Academy at under-12 level having been spotted by former Head of Academy Recruitment, John James.

Harley represented Torbay and District Schoolboys at the under-11, under-14 and under-15 age groups and represented the Academy in the Super Cup in Northern Ireland in 2019.

He joined the Academy programme as a nine-year-old after attending Plymouth’s Centre of Excellence.

He represented Plymouth schoolboys at under-11, under-14 and under-15s and was a member of Darren Way’s under-18 side towards the back of last season.

The wing back joined the Academy programme as a ten-year-old after attending Plymouth’s Centre of Excellence.

He represented Plymouth schoolboys at under-11 and made captain for the under-14 and under-15s age groups.

Kieran Edworthy is hoping to follow in the footsteps of his father, albeit it from a different position.

The former Ivybridge Community College pupil is the son of former Argyle full back Marc Edworthy who was a member of the Greens play-off winning squad in 1996.

The striker joined the Academy programme at under-14 level and a number of fixtures for the under-18 side last season.

Forward Henry Donovan is another attendee of Ivybridge Community College.

He joined the Academy programme as an 11-year-old and represented Plymouth schoolboys at under-14 and under-15s.

Henry featured towards the back end of the under-18s title winning season, featuring in the last few matches of their EFL Merit League One campaign.

Matt joined the Robins Academy at under-13 level and joins the Greens to strengthen the goalkeeping department.

Defender, Cole Gibbings attended Bishop Vaughan Catholic School, and joins the Pilgrims having previously played for Swansea City’s Academy at under-14, under-15 and under-16.

The presentation evening was sponsored by the Big Green Lottery, a membership scheme that exists to generate valuable funds for the Argyle Academy.
We currently have 650 BGL members and it would be an amazing achievement to reach 1,000, as this would equate to huge increase in investment from the BGL to the Argyle Academy.

Membership is just £2.25 per week, and members also benefit from weekly cash prizes, a grand annual prize of £10,000, big match ticket priority and discounts in the Home Park Superstore.