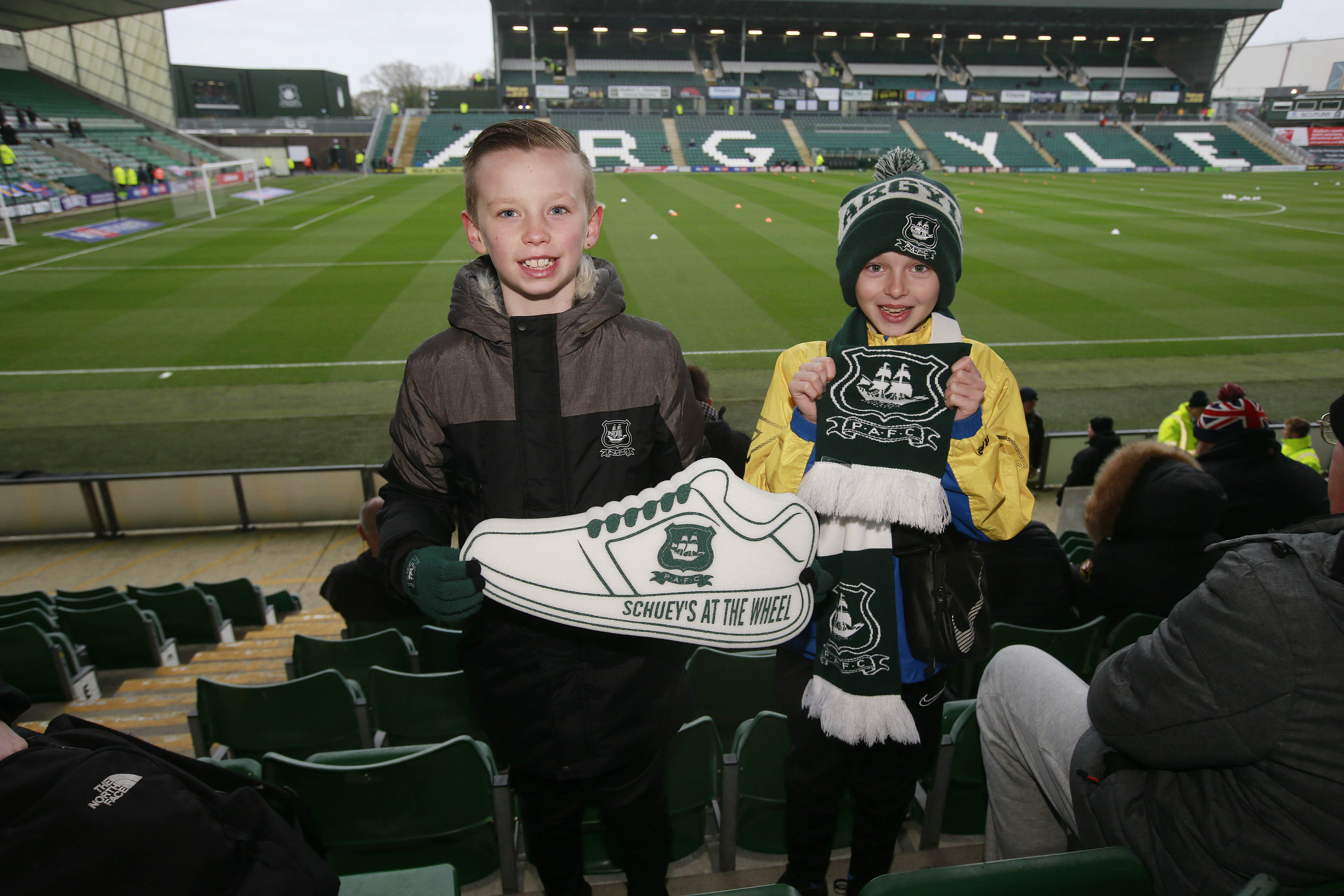 Having played 11 of their last 14 games in all competitions on the road, Argyle manager Steven Schumacher will be hoping to harness the power of another bumper crowd as Sky Bet League One front runners Rotherham United visit Home Park on Saturday.

Despite seeing their four-game winning streak snapped by Cambridge United at the Abbey Stadium on Tuesday night, the Greens head into the game sitting in the play-off places, with a run of home fixtures to come.

Another large crowd is expected at Home Park and we encourage supporters to arrive early. Late arrivals cannot have an expectation of making it into the stadium before kick off.

Please note that while much of the information found below is similar to previous fixtures, we update this guide for every fixture, with most recent updates provided at the top of the list below.

Following examples of supporters breaching the pitch perimeter at Home Park and other stadia in recent weeks, Argyle would like to issue a reminder that such offences are strictly prohibited.

Two-year bans will be issued to supporters proven to have breached ground regulations in this respect, and this applies to offenders of all ages. For those under-18, bans may also be issued to the accompanying adult or individual purchasing tickets.

In recent fixtures, we are aware that supporters have entered the pitch post match in an attempt to receive first team players' shirts after games - this will not be tolerated, and will carry the same sanctions as above.

Since the home fixture against Lincoln City, the government's rules for proof of Covid status have been relaxed, and supporters are no longer required to provide vaccination evidence.

While mandatory checks are not in operation at Home Park, we encourage supporters to consider their fellow fan, take a lateral flow test before leaving home, and avoid attending the game if feeling unwell.

The staging areas around Home Park initially set up for Covid checks will now serve as a bag check area, helping us to streamline the queueing process at turnstiles and reduce entry times.

We continue to encourage supporters to arrive early. With big crowds continuing to attend games at Home Park, large numbers of supporters arriving late cannot have an expectation of making it into the stadium before kick-off.

Having taken on supporter feedback, particularly relating to queues for entry to the stadium, the club has issued a match-day update, containing new information on turnstiles, queue management and refreshment kiosks. Click here to read it.

As always, we encourage supporters to make use of digital tickets wherever possible, reducing queuing times at the Ticket Office, as well as the impact of ticket production. Click here to read more about digital tickets.

Should supporters arrive late for the fixture, there will be one late turnstile open in the Devonport End stand, and it will remain open until half-time.

Tickets remain available for this fixture, and supporters can purchase them from argyletickets.com, by visiting the Home Park Ticket Office in person, or by calling 01752 907700. Tickets can also be purchased on the day of the game.

Family fun from 11am

Our outstanding Argyle Community Trust team will be providing a whole host of free family friendly sports and games just outside the stadium, beginning at 11am.

Activities include inflatable football, dodgeball, tennis and archery, and the event can be accessed outside of the Devonport End, very close to the entrance to the seated family area in block 6, and adjacent to the main car park.

Families interested in participating in these free activities can simply turn up from 11am and get involved. However, for specific queries or further information, you are welcome to email community@pafc.co.uk.

If it is your first time visiting the Theatre of Greens, please click here to check out our first-time fans guide.

From 1pm, the popular Mayflower Grandstand Fan Zone is once again open for this fixture, offering supporters access to delicious food and drink, with early kick off football screened in this area.

Located within the gated area behind the Lower Mayflower, the Fan Zone aims to provide the best-ever match-day experience for the Green Army seated on that side of the stadium.

Having changed our working arrangements with the NHS to erect a smaller marquee to double up as a versatile space for supporter use on match-days, supporters will notice the return of a number of food kiosks, bars, and a covered area with tables and chairs.

The new catering vendors located within the Mayflower Fan Zone will serve a range of hot, cold and alcoholic drinks, as well as offering fresh and delicious food – including hot dogs, fries, pasties, pulled pork baps and baguettes.

Copies of our award-winning match-day programme, The Pilgrim, are once again available around the stadium for purchase at £3, while a limited number will also be available to purchase from the Argyle Superstore.

The Superstore will be open until 30 minutes after full-time, selling a range of Argyle memorabilia, replica kits, and souvenirs.

For any accessibility or match-day support queries, our dedicated Disability Liaison Officer can be contacted on disability@pafc.co.uk.

Sensory packs, which include a drawstring bag, ear defenders, fidget spinners, a sensory ball, an awareness card and lanyard, as well as further match-day information, are now available for children who need them – free of charge. Click here to find out more.

Concession kiosks will be open, serving a range of food and beverages.

There will be a discount of 25% on all products purchased from food and beverage kiosks inside the stadium between 1pm-1.45pm.

Meanwhile, toilet facilities will continue to operate with a one-way system. In order to avoid large queues at peak times (e.g half-time), we advise supporters to plan ahead for toilet breaks, using facilities when they are likely to be less busy.

We encourage fans to pay using contactless methods wherever possible to reduce queuing times. Supporters are advised that the concessions in the Upper Mayflower Grandstand operate on a cashless basis.

On your approach to Home Park, you will notice a number of external catering venues offering hot food and refreshments. Please note that prices and menus at these outlets are not controlled by the club, and are subject to change. There is also a food court inside the Mayflower Grandstand Fan Zone, offering a range of hot, cold and alcoholic drinks, as well as offering fresh and delicious food – including hot dogs, fries, pasties, pulled pork baps and baguettes. As above, these kiosks are not operated by the club, and prices are subject to change.

Our food and beverage kiosks throughout the stadium serve a range of food, beverages, and alcoholic drinks, stadium-wide. Please see an indicative menu and pricing below.

Supporters should be prepared to be searched by our security team as they enter the stadium.

Wherever possible, we will ensure that 'wand' searches are also undertaken by members of the same gender. If that is not the case upon entry, and you feel at all uncomfortable, please raise this with a member of the security team - who will make the necessary arrangements.

As with all major sporting events, bringing bags to the stadium is actively discouraged. However, fans arriving at Home Park with a small personal bag (for example, medical bags or handbags) capable of being stowed under seats is permitted. Please note, supporters should expect this to be searched before entry.

We ask that supporters arrive in plenty of time to avoid queues forming as kick-off approaches.

For more information on what we are doing to keep you safe, and how you can help make attending Home Park a great experience for all, please check out our Return to Stadium Guide.

Following feedback from a number of previous fixtures, the club has implemented soft ticketing checks in the Devonport End, as well as providing an additional stewarding presence in the concourses at half-time.

Please respect that our safety team are in place to ensure the wellbeing of everyone inside the stadium - the last thing that we want to do is impact supporter enjoyment.

Seated in the Devonport End for this fixture? Please click here to read more

The club has also written to supporters in this area to reiterate that action will be taken in this area, if necessary.

Home Park is an all-seater stadium. By buying a ticket and entering the ground, spectators agree to abide by the ground regulations; these regulations forbid persistent standing.

To maintain our excellent safety record and to protect our safety certificate the regulation in relation to persistent standing will be enforced and we ask spectators to refrain from persistently standing. Those failing to comply may be subject to ejection. Your assistance is very much appreciated.

A reminder that supporters can tune in to our free pre-match show live! Whether you are in the stands at Home Park, on the way to the game, or watching from home, simply go to our YouTube channel to enjoy live build-up featuring Argyle TV's Charlie Price and former Pilgrim Ian Stonebridge.

Where can I purchase souvenirs?

The Argyle Superstore, located next to the Home Park Ticket Office by the main entrance to the Mayflower Grandstand, is open from 9am until 30 minutes after full-time on match-days. The Superstore is operating a one-way system with Covid measures in place to ensure safety of supporters and staff alike.

In addition to the Superstore, there is a large pop-up retail outlet located on the corner of the Devonport End and Lyndhurst Road Stand, selling a range of supporter favourites, including training wear and souvenirs.

Inside the stadium, supporters will find a retail unit located in the concourse of the Lyndhurst Road Stand, underneath Blocks 14/15, also offering a selection of our most popular items.

It's not just team news and ticket information available on the official Argyle App, there are lots of fun ways to enhance your matchday and prove your football knowledge to the rest of your family!

Take our pre-match quiz to see how much you really know about the opposition, and don't forget to vote for your Man of the Match from our shortlist of four contenders straight after the final whistle.

Not got the App yet? Click here to download free on Android devices, and here for Apple.

Outland Road Car Park, adjacent to Home Park is a very large – and free! – car park. It is council-run, and is typically a park-and-ride car park into the city. It is free to use on match-days, but will obviously begin to fill up very early for many fixtures, especially local derbies, Bank Holiday fixtures, etc.

Additional street parking is available surrounding Home Park, but please be mindful of local residents, park sensibly, and be aware of any parking restrictions and permit areas.

There are also several large pay and display car parks in the city centre, which is within walking distance of Home Park, but not advised for those who struggle to walk beyond short distances.

As always, we encourage supporters to provide feedback on their experience at Argyle to feedback@pafc.co.uk.

We can’t wait to see you on Saturday, and hope you have a fantastic match-day experience at Home Park.